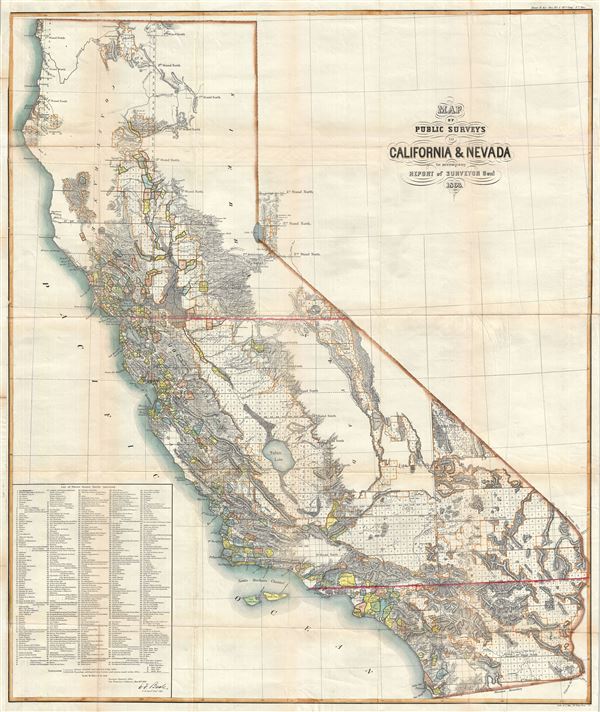 The first map to detail Spanish-Mexican land grants in California.

An attractive and uncommon map of California and parts of Nevada issued by the Surveyor General in 1863. The map covers all of California as well as the western parts of Nevada near Lake Tahoe and Carson City. Remarkably, a list of 438 'Private Grants Finally Surveyed' appearing in the lower left quadrant numerically identifies corresponding colored zones on the map proper. These refer to Spanish-Mexican land grants throughout California of which this is most likely to be the earliest map to specifically detail. The present map is intended by the U.S. Government to certify and formally recognize these grants, including lands granted to the Church around the various missions as well as private grants. Other surveyed lands are highlighted in orange while unsurveyed lands are left uncolored. The massive Tulare Lake is noted, once the largest freshwater lake in North America, practically a sea, which has since been drained for irrigation purposes. Throughout topography is rendered in hachure. The Land Office Survey Department issued this map in 11 editions from 1854 to 1864, this being the 10 and thus one of the most advanced, issues. Compiled by E.F. Beale, Surveyor General, and engraved and lithographed by Joseph Bien of 24 Vesey Street, New York.

Very good. Backed on archival tissue for stability. Some toning on original fold lines and wear at fold intersections.