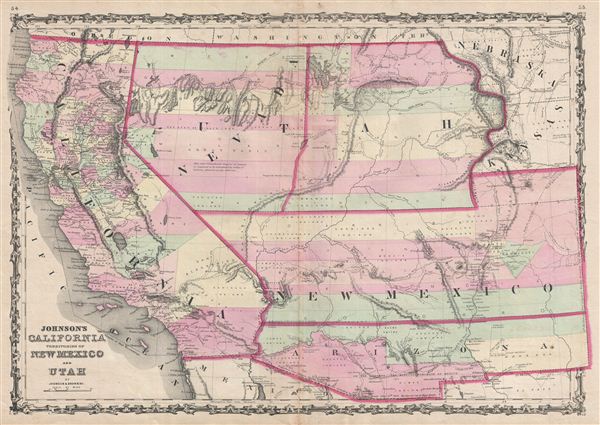 The scarcest and most historically significant of A. J. Johnson's southwest series. This is the 1860 first edition of A. J. Johnson and Ross C. Browning's map of California, Utah, Nevada, New Mexico, and Arizona. The map covers from the 42nd parallel south to the Mexico border and from the Pacific to modern day Colorado. Though later editions of the Johnson atlas are common, the 1860 edition, which was Johnson's first, had the smallest print run of the entire series and for all intent and purposes, unobtainable.

Unlike most maps in the 1860 Johnson atlas, this map was a unique production and therefore not based upon the earlier atlas maps of J. H. Colton. Rather, it seems that Johnson derived this map by dissecting the plates of his 1859 wall map of North America and then incorporating, oftentimes superimposing, more contemporary detail.

Such is the case in the Nevada – Utah territory, where both territories are labeled Utah, despite being split in half along longitude 113 and the miss-mapped Sevier / Santa Clara River. Johnson revised this curious border to strictly adhere longitude 116 in the subsequent 1861 edition of this map. eastern Utah here extends well into modern day Colorado incorporating Middle Park, but not North Park and South Park, within its borders. The Colorado Gold Region, which was first discovered in 1858, is well labeled. Subsequent editions of this map, published in 1861 shortly after the incorporation of Colorado, revise this border to include the territory. Fillmore City is identified as the capital of Utah and a Mormon Settlement is noted along the Nevada – California border.

Of even greater interest in Johnson's curious treatment of New Mexico and Arizona. Here the region is divided along the 34th parallel, with Arizona occupying the southern part of New Mexico. This configuration first appeared in wall maps of the United States and North America issued by Johnson and Colton in 1859. We have been able to discover no clear cause for this division, for it aligns neither with the Gadsden Purchase and presages the events of the Civil War. In 1860, when Johnson drew this map, New Mexico was a recognized territory, but Arizona was not. It could well be that Johnson and Colton were responding to appeals to congress by the residents of southern Arizona for recognition as a territory. With only a small population and minimal political influence this region was largely ignored by the New Mexico territorial government in distant Santa Fe. Though Arizona applied several times to be granted independent territorial status, its low population caused the request to be repeatedly denied. The latitudinal border between New Mexico and Arizona was subsequently removed in the 1861 edition. Remarkably, both Johnson and Colton proved remarkably prescient in setting this borderline, for little did they know that in 1861 the Confederate Col. John Robert Baylor would invade southern New Mexico and declare himself governor of the Confederate State of Arizona, which briefly reappears in the 1862 and 1863 Civil War editions of this map.

It is further noteworthy that this example of Johnson's map is in pristine condition – a rarity for any early edition of Johnson's southwest and a special bonus in this supremely uncommon first edition. This map was published by A. J. Johnson and Ross Browning as plate nos. 54-55 in the 1860 edition of Johnson's New Illustrated (Steel Plate) Family Atlas. Rumsey has an example of this map in which the plate nos. are set at 47-48, further commenting that there was a later issue of the atlas published in the same year. This map is identical to the Rumsey example with the exception of the page numbers, leading us to believe it must have come from the 2nd 1860 issue of the first edition.