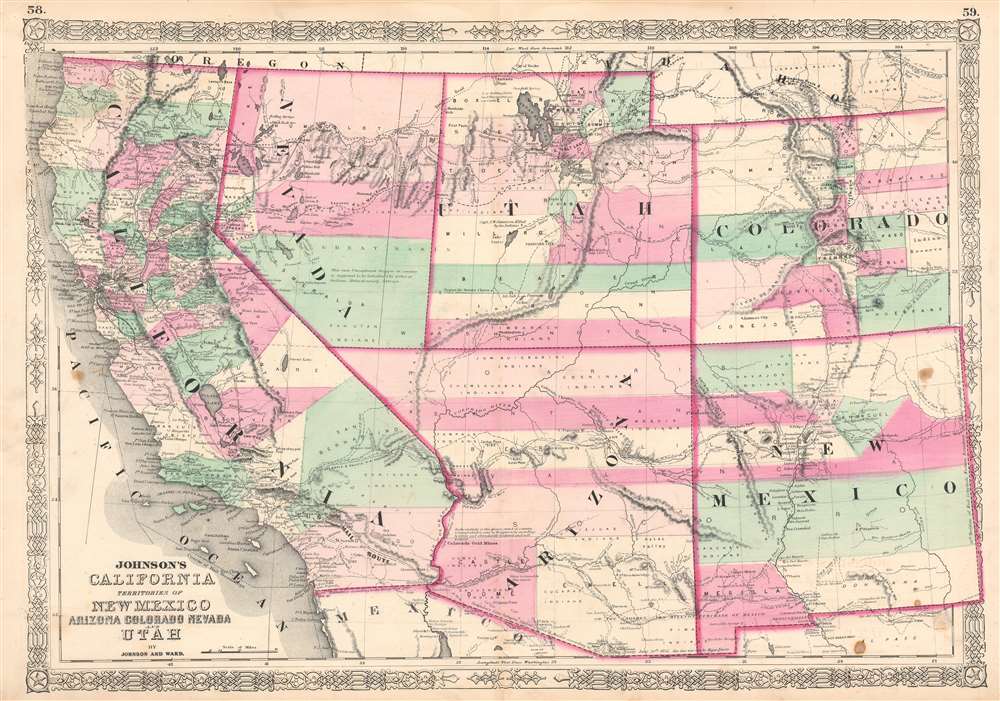 One of the most popular Johnson maps among American Southwest aficionados.

One of the scarcest and most historically significant of A. J. Johnson's southwest series. Published in 1863 at the height of the American Civil War, this stunning map depicts the state of California and the territories of Nevada, Utah, Colorado, New Mexico and Arizona. The map offers superb detail throughout, noting mining districts, emigrant trails, the Santa Fe Trail, the Pony Express Route, and several proposed railroads, as well as American Indian tribes, geological features, and local political divisions.

A History of Johnson's Southwest Series

Johnson updated the plates for this map annually and sometimes even issued multiple variants over the course of a single year. Unlike most maps in the 1863 Johnson atlas, this map was a unique production and therefore not based upon the earlier atlas maps of J. H. Colton. Rather, it seems that Johnson derived this map by dissecting the plates of his 1859 wall map of North America and then incorporating, oftentimes superimposing, more contemporary detail.

A Close Look at the Map

Johnson added considerable detail in the mountainous regions of California, Nevada, and Colorado. Arizona and New Mexico appear as independent territories but, for the most part, adhere to the old 'New Mexico' county structure. The southern boundary of Nevada with Arizona is set at 37 degrees of Latitude such that Las Vegas, which is noted, rests firmly within Arizona. The Utah-Nevada Border is set at 115 degrees of Longitude, roughly one degree further west than it is today. Fillmore City is shown as the capital of Utah though Salt Lake City also appears. The Colorado Gold Region, which was first discovered in 1858, is well labeled.

Intriguing Detail Included on the Map

Throughout, this map is full of interesting and sometimes erroneous notations regarding natural features, Native American tribes, proposed railroads, mail routes, explorer's tracks, and treaty lines. In the highly desertous region near modern day Quartzite, Arizona, a note reads 'in the vicinity of this place a tract of country is found which is said by Trappers to be exceedingly fertile and abundantly timbered and well watered.' Johnson also notes silver deposits in this same region. The famed Pony express Route is delineated as it passes through Nebraska, Utah, and Nevada on its way to California.