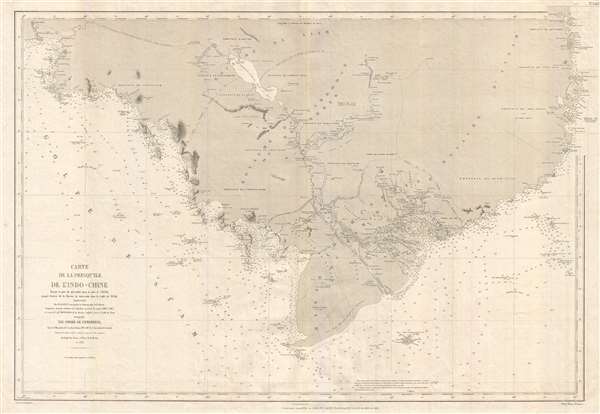 Rare map of Cambodia first issued just after the establishment of the French protectorate in 1863.

An extremely uncommon 1880 nautical chart or maritime map of Cambodia by the French hydrographic service, the Dépot des Cartes et Plans de la Marine. First issued in 1865, with updates to 1880, this map is roughly centered on the Cambodian capital of Phnom Penh. The map covers from Bangkok and the Bay of Siam, eastward as far as the South China Sea and the Vietnamese port of Qui Nhơn. Unlike many nautical charts, the present chart offers excellent inland detail, most likely because of the vast array of navigable inland rivers that spider web through the region. Numerous communities and cities are identified, as are the ruins of Angkor Wat, navigable canals, and overland caravan routes from Bangkok (Thailand) and Saigon (Ho Chi Min City, Vietnam).

This map was made at the request of the French Emperor Napoleon III, whose government was increasingly active in this region. In 1863, just 2 years before the first edition of this map was prepared, the Cambodian king Norodom had requested the establishment of a French protectorate over his country. In 1867, Siam (modern Thailand) renounced suzerainty over Cambodia and officially recognized the French protectorate on Cambodia, in exchange for the control of Battambang and Siem Reap, provinces which officially became part of Thailand. (These provinces would be ceded back to Cambodia by a border treaty between France and Siam in 1906). The established border appears on this map. The formation of French Indochina in the subsequent decades had a lasting effect on the region.

This map was issued by the Dépot des Cartes et Plans de la Marine based upon French surveys completed by M. Manen and British Surveys, for the Gulf of Siam, completed by the British Captain Richards. It was engraved by H. Lansraux and printed by Charles Dyonnet in Paris. While we have been able to identify a few institutional examples, this map is rare by any measure and has no market history.