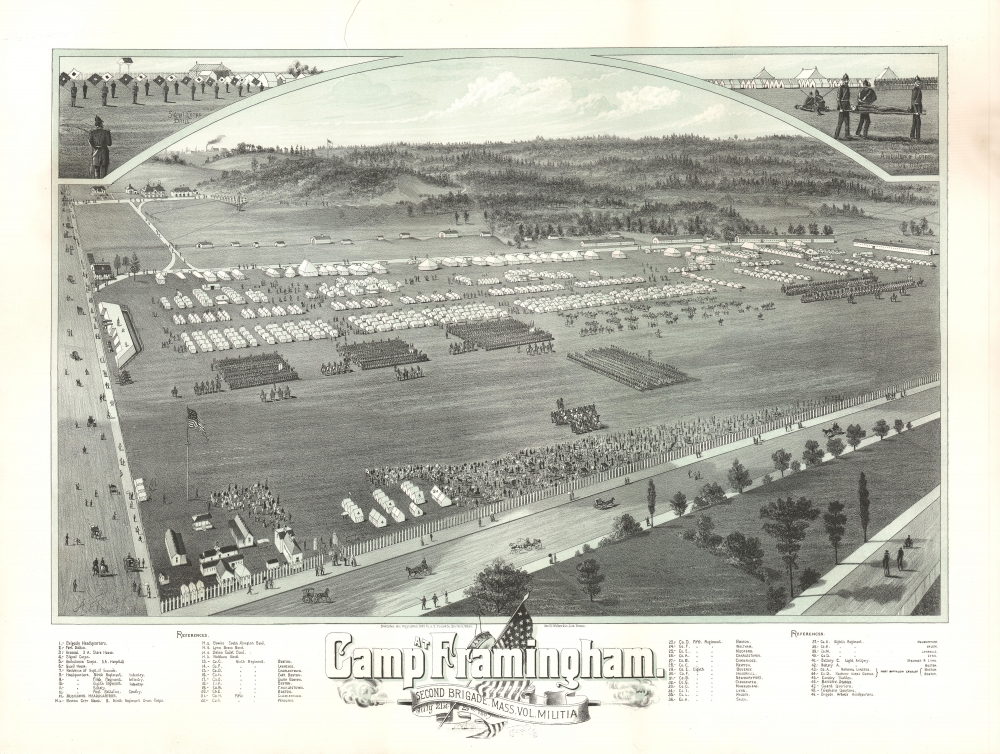 This is an 1885 Albert F. Poole bird's-eye view of Camp Framingham, Massachusetts, a former Massachusetts National Guard camp in Framingham. The view depicts training exercises undertaken by the Second Brigade of the Massachusetts Volunteer Militia. Individual tents are illustrated. They are also numbered and correspond with an index situated along the bottom border. This allows readers know where they or their loved one had spent those five days in July 1885. The hospital, ambulance corps, signal corps, headquarters, and individual tents for the regiments involved are illustrated. Several units are actively engaged in organized drills, possibly for the entertainment and education of the spectators along the fence, some standing while others are in carriages. Passers-by, either on foot or in carriages, appear along the roads that encircle the camp. Views of the Signal Corps and the Ambulance Corps doing their assigned tasks are situated in the upper left and right corners, respectively.

Camp Framingham was a Massachusetts National Guard Camp in Framingham, Massachusetts, from 1873 until 1944. It was also known Camp Dalton or Fort Dalton. The camp served as a mobilization station during the Spanish-American War, the build-up along the U.S.-Mexico border in 1916, and during the summer of 1917 to send soldiers overseas to fight during World War I. It gained two new monikers during the Spanish-American War when it was known as both Camp McGuinness and Camp Dewey. The base served as Headquarters for the 181st Infantry Regiment from May 1942 until December 1943, then the regiment and its companies served on coast patrol duty. The base was transferred to the Massachusetts State Police in 1948, and parts of it are still used by the Massachusetts State Police and the Massachusetts Emergency Management Agency.

This view was created and published by Albert F. Poole in 1885 and lithographed by George H. Walker and Company of Boston. One example is cataloged in OCLC and is part of the collection at the State Library of Massachusetts. We located a second example in the Leventhal Map Collection at the Boston Public Library.

Albert 'Bert' Poole (1853 - November, 1934) was an American painter, cartoonist, and viewmaker active in New England during the late 19th and early 20th centuries. Pool was born in Brockton (North Bridgewater), Mass. and was responsible for at least 46 town views published between 1880 and 1905. Early in his career he worked as a clerk and school principle. He turned his attention to the visual arts in 1880, when is fist city view, Bar Harbor Maine, was published by J. J. Stoner. He partnered with another view maker George E. Norris (1855 - 1926), in 1993, published as 'Poole and Norris.' Around the turn of the century, he began publishing under the imprint of 'Bert Poole Co. Boston.' He is known for having a distinctive style employing decorative borders, attractive titles, and vignette imagery. He frequently used a gravure technique, imparting on his images a graduated tonal effect. This is some confusion regarding his death date. Some references (Reps) identify it as 1834, others, 1839. His obituary in the Boston Globe confirm a November 1934 death. Learn More...

Very good. Closed tear extending one and one half inches (1.5) from top margin professionally repaired on verso. Does not effect printed area. Exhibits soiling from previous framing on verso that does not effect the printed image on front. Blank on verso.