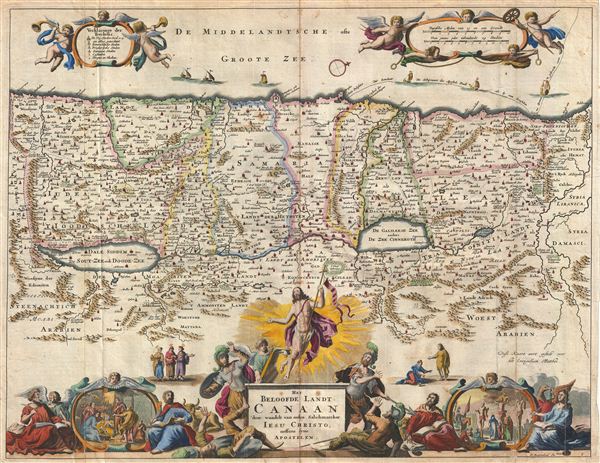 This is a splendid early example of Bastiaan Stoopendaal and Jacob Keur's c. 1702 map of Canaan (Israel or Palestine). Oriented to the west, this map covers the Holy Land from the Mediteranean to just beyond the Jordan River. This map purports to illustrate the Holy Land as it appeared at the time of Jesus Christ; however, numerous elements from earlier periods have been inherited from Stoopendaal's various source maps. These include a fleet of ships in the Mediterranean transporting cedar from Sidon to Jaffa for the construction of Solomon's Temple and, in ruin at the bottom of the Dead Sea, the corrupt cities of Sodom, Gammora, Seboim and Adama.

This map is derived from Nicholas Visscher's 1660 map of the same name, and though cartographically nearly identical, features updated decorative elements. These include scenes from the life and travels of Jesus along the bottom of the map.

This map was published by the Keur family in their popular Keur Bible. As one of the Dutch 'Staten' bibles published between 1637 and 1760, the Keur Bible contained five or six maps: Werlt Karte, Paradys, Perigrinations, Canaan, Ierusalem, Reysen Pauli, and sometimes Reyse der Kinderen Israels. This specific map was issued in the1702 edition of the Keur Bible.