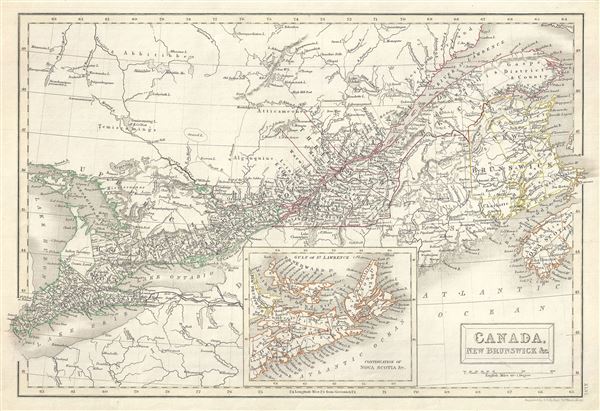 This is a fine example of Adam and Charles Black's 1844 map of Quebec (Canada East or Lower Canada) and New Brunswick. The map covers from Essex to Cape Breton Island in Nova Scotia (shown via inset at bottom center). It includes Upper and Lower Canada (Ontario and Quebec), New Brunswick and Nova Scotia. Also shows the Great Lakes Ontario, Erie and Huron. An inset map near the bottom margin of the map details Nova Scotia, Cape Breton Island and Prince Edward Island. Throughout, the map identifies various cities, towns, rivers and an assortment of additional topographical details.

Canadian provinces and territories were under British and French control from the 16th century, until France gave up its claims in the Treaty of Paris in 1763. Canada would remain a collection of British colonies until its confederation in 1867, when the British Province of Canada was divided into Quebec and Ontario and the British colonies of New Brunswick and Nova Scotia incorporated as Canadian provinces. This map was drawn during the time following the Canadian Rebellions of 1837 against the British Empire, which led to a single colony of the United Province of Canada and the adoption of representative government by 1848. The map was engraved by S. Hall and issued as plate no. XLVI in the 1844 edition of Black's General Atlas.