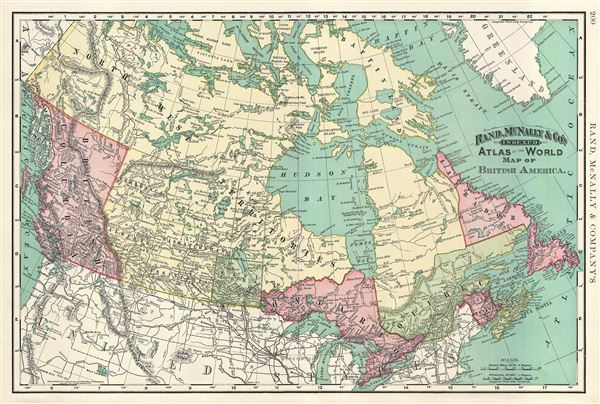 This is a beautiful example of Rand McNally and Company's 1893 map of British America or Canada. It covers the entire region from Victoria Island to Lake Erie and from the Pacific Ocean and Queen Charlotte Islands (Haida Gwaii) to Newfoundland. Manitoba at the time was much smaller that its current size and was known as the 'postage stamp province.'

Canadian provinces and territories were under British and French control from the 16th century, until France gave up its claims in the Treaty of Paris in 1763. Canada would remain a collection of British colonies until its confederation in 1867, when the British colonies of New Brunswick and Nova Scotia would become Canadian provinces along with Ontario and Quebec. Although known as the 'Birthplace of Confederation,' Prince Edward Island would only join the confederation in 1873. Although the region suffered economically during the recession of 1893, Ontario continued to flourish in mineral exploitation and industry.

Color coded according to regions and territories, the map notes several towns, cities, rivers, mountains, and various other topographical details with relief shown by hachure. This map was issued as plate no. 200 in the 1895 issue of Rand McNally and Company's Indexed Atlas of the World - possibly the finest atlas Rand McNally ever issued.