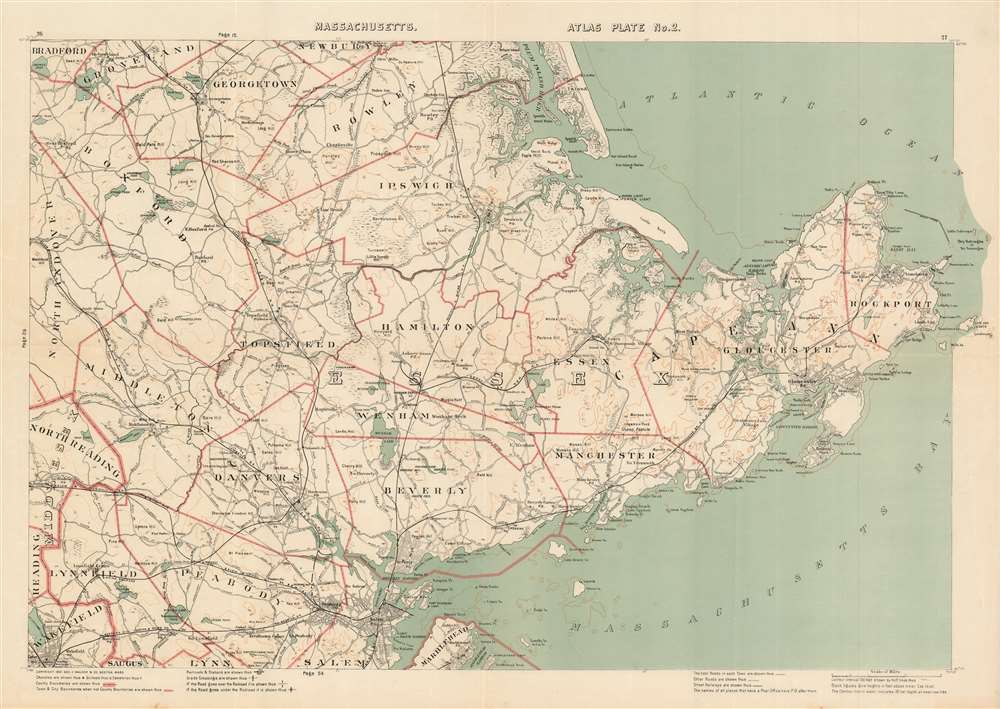 The first edition of an impressively detailed map of Cape Ann.

This is a first edition 1891 Oscar W. Walker map of Cape Ann / Gloucester, Massachusetts. Depicting the region from Woodchuck Hill to the Dry Salvages and from South Byfield to Marblehead Neck, the map provides a clear and, more importantly, usable, overview of the area. Cities and towns are labeled throughout, including Salem, Danvers, Marblehead, Ipswich, Beverly, Gloucester, and Rockport. Plum Island and the Plum Island River occupy the top center. Major roads wind across the map, and differentiation between three different road grades allows travelers unfamiliar with the area to know the best roads to take. Stark black lines mark several branches of the Boston and Maine Railroad and railroad stations are identified.

Walker, O.W., Atlas of of Massachusetts, (Boston: George H. Walker) 1891.     The Atlas of Massachusetts, compiled by Oscar W. Walker and published by George W. Walker, was the result of over ten years of work. Over one hudred civil engineers and surveyors surveyed the Massachusetts, each of whom examined and approved proofs of the final product. Local historians, town clerks, and other town and city officials, as well as private individuals, provided help concerning local names and other information that otherwise would have been unknown to the atlas's publishers. In the introduction to the atlas, George Walker lauds the attention to detail and the unceasing effort to achieve the highest possible degree of accuracy. Specifically he cites the difficulties associated with the myriad railroad crossings located across the state, and the importance placed on accurately describing road conditions throughout the state. Walker wanted the atlas to be accessible and useful for a broad audience, allowing the user to know road conditions in cities and towns with which they were not familiar. First published in 1891 and appears to have been published in multiple editions through at least 1922.