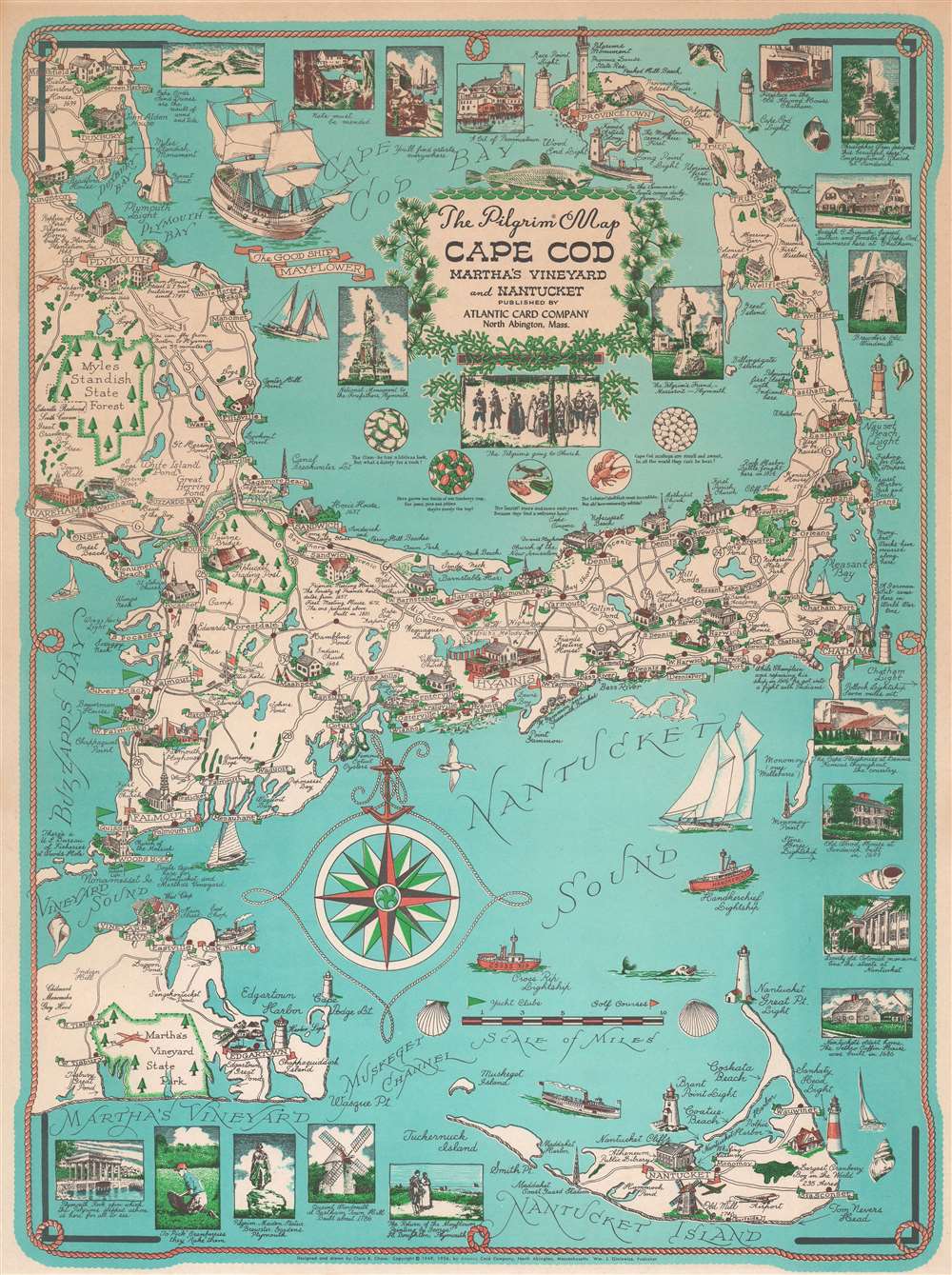 This is a 1956 Clara K. Chase revision of Ernest Dudley Chase's iconic map of Cape Cod, Martha's Vineyard, and Nantucket. The map covers from Marshfield to Nantucket and from Martha's Vineyard to Provincetown, comprehensive of the towns of Duxbury, Kingston, Plymouth, Falmouth, Hyannis, Chatham, Wellfleet, Nantucket, and Edgartown, among others. Historical sites are rendered in profile. Wonderful vignettes surround the map, most of which are annotated with descriptive text, some of which are quite humorous.

Chase first drew this map in 1949. It proved popular and was issued in large, medium, and small formats. The present example is a medium format issue. In 1955 Clara Chase, Ernest's wife, revised the map and reissued the copyright in her own name. At least one subsequent edition, published in 1956 with a new title, also bore her copyright. A later revision followed in 1960 in which 'President Kennedy's Summer Home' near Hyannis Por was added. In the final edition, Clara's imprint was removed and replaced by the imprint of the Atlantic Card Company. We note a single cataloged example of the 1956 edition, part of the David Rumsey Map Collection.

Clara Katrine Chase (March 12, 1902 - February 22, 1987) was an American map publisher. She was celebrated cartographer Ernest Dudley Chase's (1878-1966) third wife and at least one of his maps, a pictorial map of Cape Cod, appears with her imprint (designed and drawn by Clara K. Chase) in 1956. However, it is unclear exactly what role Clara played in publishing her husband's maps. Learn More...


Ernest Dudley Chase (1878-1966) was an American illustrator of greeting cards and pictorial maps active in the first half of the 20th century. From his studio in Winchester Massachusetts, Chase became famous for his elaborately illustrated pictorial maps. He was born in Lowell Massachusetts and attended the Lowell Textile School and the Vesper George Art School. He took work with Butterfield Printing Company in 1900. In 1906 he moved to the W. T. Sheehan Printing Firm. He began producing postcards and greeting cards on his own account in 1908. This initial imprint was Des Arts Publishers, but later he changed it to Ernest Dudley Chase Publishers. Chase is best known today for his distinctive pictorial maps, most of which he published privately, characterized by densely packed vignette images of important locations. The biographical pamphlet A Meticulous Maker of Maps describes Chase's attention to detail wherein, pursuing a 'passion for perfection' by stippling his images 'dot-by-dot, with tiny pens' under a magnifying glass. His impressive corpus includes nearly 50 maps focusing various parts of the United States and Europe. Most are thematic, focusing on topics such as wonders of the world, stamps, aviation, and war. Others, such as his map of The United States as viewed by California and Loveland are satirical in nature. All are highly coveted by collectors today. Learn More...