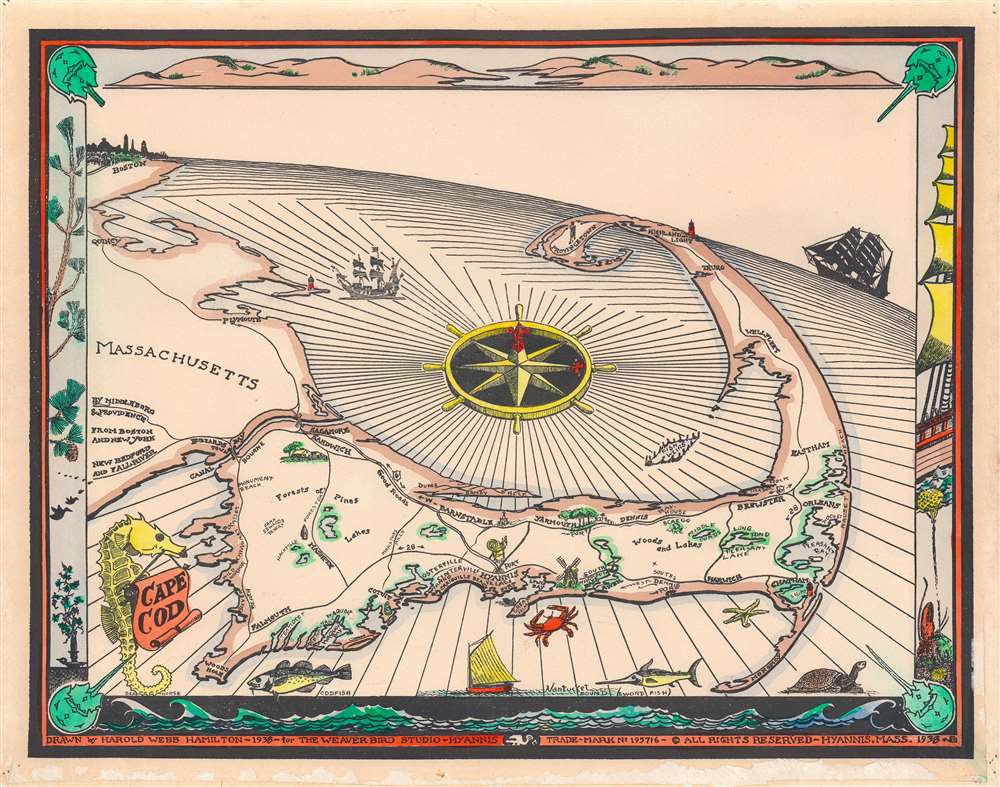 A charming 1938 pictorial map of Cape Cod, Massachusetts, but artist Harold Hamilton Webb. Centered on Hamilton's home, Hyannis, the map looks north on Cape Cod, which reaches to the horizon line near Providence. The line of the horizon is exaggerated between Boston and Providence to express the curvature of the Earth - an innovative style cartographer Richard Edes Harrison adopted to great effect for war progress maps in the 1940s. The map shows the roads and lakes of Cape Cod. Fish swim the seas and three sailing vessels ply the waves. The title, in the lower right, is supported by a seahorse. The border is composed of scenes from Cape Code, including the land, sea, foliage, and a sailing ship.

This map was published in 1838 by Harold Webb Hamilton for the Weaver Bird Studio, Hyannis. The Studio was a fabric manufacturer and clothing shop owned by Katharine B. Rossire based in Yonkers, New York and Hyannis, Massachusetts. This map is scarce. We note an example at the David Rumsey Collection and one or two records on the private market.

Harold Webb Hamilton (January 20, 1892 - September 13, 1949) was an American artist active in Cape Cod, Massachusetts. Hamilton was bornin Mexico City. He lived in Mexico City from birth to 1898, then again from 1911 to 1920. There he studied art at the San Carlos Academy. He severed with the U.S. Marines in World War I (1914 - 1918), seeing action and was wounded at Battle of Saint-Mihiel (1918). He then relocated to New York City where he became a commercial Agent of 'All America Cables Inc.' Around 1925, he relocated to Buenos Aires, Argentina, where he lived for many years, eventually becoming president of the International Telephone and Telegraph Company. Around 1937 he relocated to Hyannis, Massachusetts where he dedicated himself to his hobby of making pen and ink sketches of Cape Cod and Florida scenes. Hamilton died on Cape Cod at 57. Learn More...