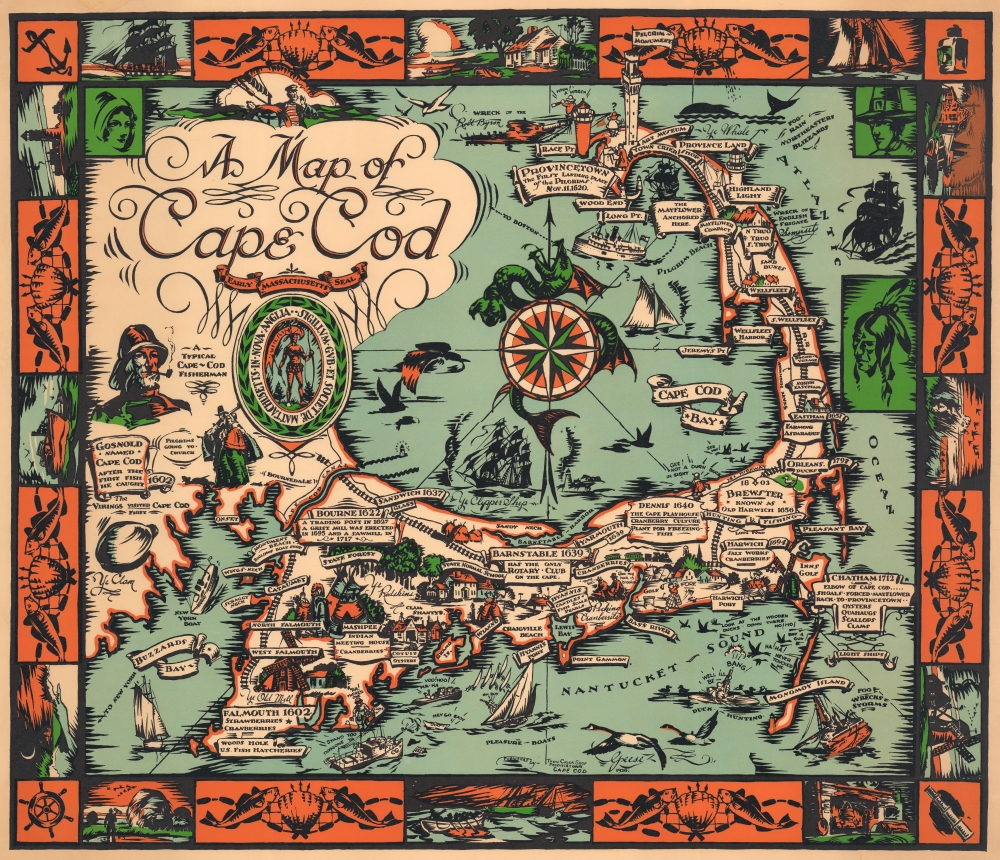 This is a 1930 Town Crier Shop pictorial map of Cape Cod, Massachusetts, in its rare full color large format edition. Numerous locations throughout Cape Cod are labeled, including towns, tourist sites, and other points of interest. Provincetown, Brewster, Dennis, Chatham, Barnstable, Bourne, and Falmouth all rank among them. Vignettes of mills, clam shanties, lighthouses, and ships are illustrated. Rivers, harbors, and necks throughout Cape Cod are also identified. Both the art museum and the Town Crier Shop in Provincetown are labeled, along with the Pilgrim Monument, which was completed in 1910. The Cape Cod Railroad, which was incorporated in 1846, appears and is represented by a train featuring a locomotive, coal tender, and two passenger cars. Several shipwrecks are noted, with one notable exception: the safe arrival of the Mayflower in 1620. Duck hunting, once a popular pastime on the Cape, appears prominently, with vignettes of both hunter and hunted. A decorative border surrounds the whole, with views of typical Cape Cod scenes interspersed with illustrations of fish, anchors, and other nautical instruments.

This map was published by Town Crier Shop in 1930. There were multiple editions and formats including small format (about 12 x 14 in), medium format (about 20 x 22 in), and as here, large format (24.75 x 27.5 in). There are also color variations, including a black and white edition. Of this large-format color edition, there are two states. One bears publication information below the bottom border. The publication information is absent on this, the second state. The map is scarce, especially in the large format edition, as here.