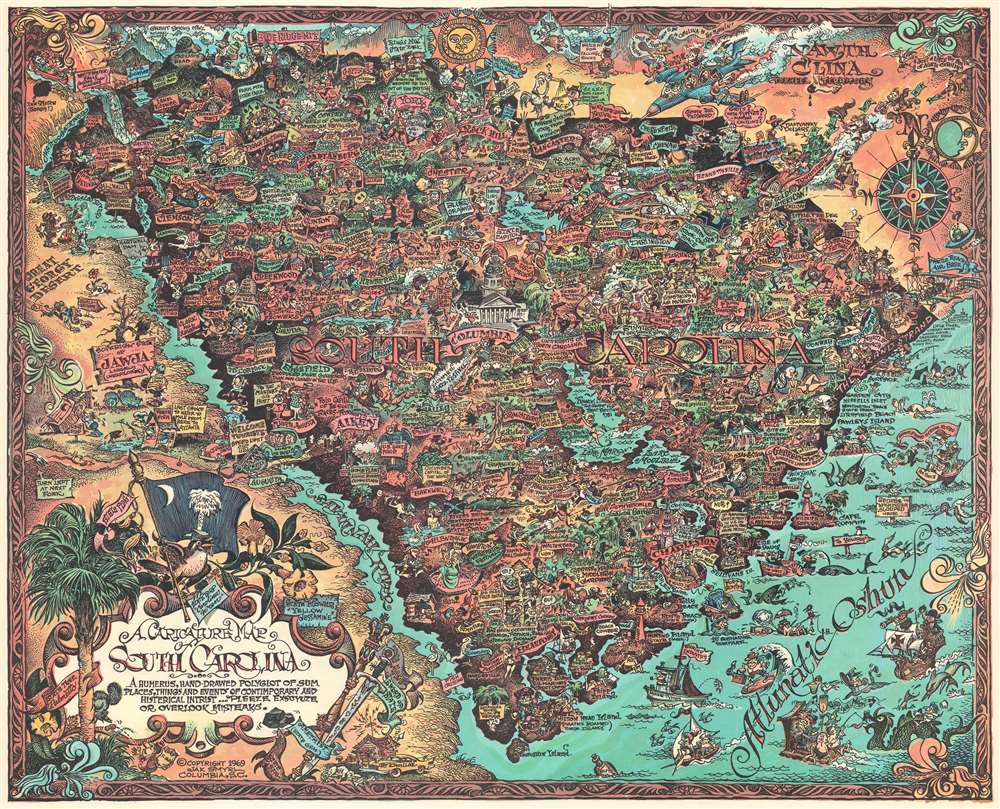 This is an entertaining 1969 Jak Smyrl pictorial map of South Carolina. Comical vignettes fill South Carolina, identifying important locations and referencing historic events. The State Capitol Building marks Columbia, alongside a stadium and a USC Gamecock for the University of South Carolina. South Carolina is home to Clemson University, represented by a tiger playing football. Colleges and universities across the state are labeled, as are state parks, lakes, and the Blue Ridge Mountains. Revolutionary War and American Civil War battles are referenced, including the Battle of Fort Sumter where the first shots of the Civil War were fired. References to the Confederacy appear as well, such as identifying the 'Birthplace of the Confederacy' and the Carolina wren adorning the title cartouche wearing a Confederate cap and brandishing the South Carolina flag. Georgia and North Carolina are both identified, but neither are spelled 'correctly'. Both appear with phonetic spellings.

Oscar Jackson 'Jak' Smyrl (May 5, 1923 - August 7, 2007) was an American cartoonist and artist. Born in Camden, South Carolina, Smyrl enjoyed the arts from a young age. He graduated from Camden High School and attended Alabama Polytechnic Institute (Auburn University) before volunteering for the U.S. Marine Corps and serving in the Pacific during World War II. He saw combat on Pacific islands and served during the occupation of North China. He drew throughout his time in the Marine Corps and created drawings for friends to keep up their morale. After returning from the Pacific, Smyrl attended the Art Institute of Pittsburgh and the University of South Carolina, where he took art classes and contributed to campus publications. He left school during his senior year to become a staff artist for The State, a newspaper in Columbia, South Carolina. This is when he dropped the 'c' from his name, stating that he was just a poor artist and couldn't afford a 'c'. He worked for The State for thirty-seven years and illustrated hundreds of other projects, including dozens of books. He is credited with being the first person to illustrate the University of South Carolina logo with the gamecock in a fighting stance. He was married to his wife Betty Spires Smyrl for forty-nine years, with whom he traveled the world. Learn More...