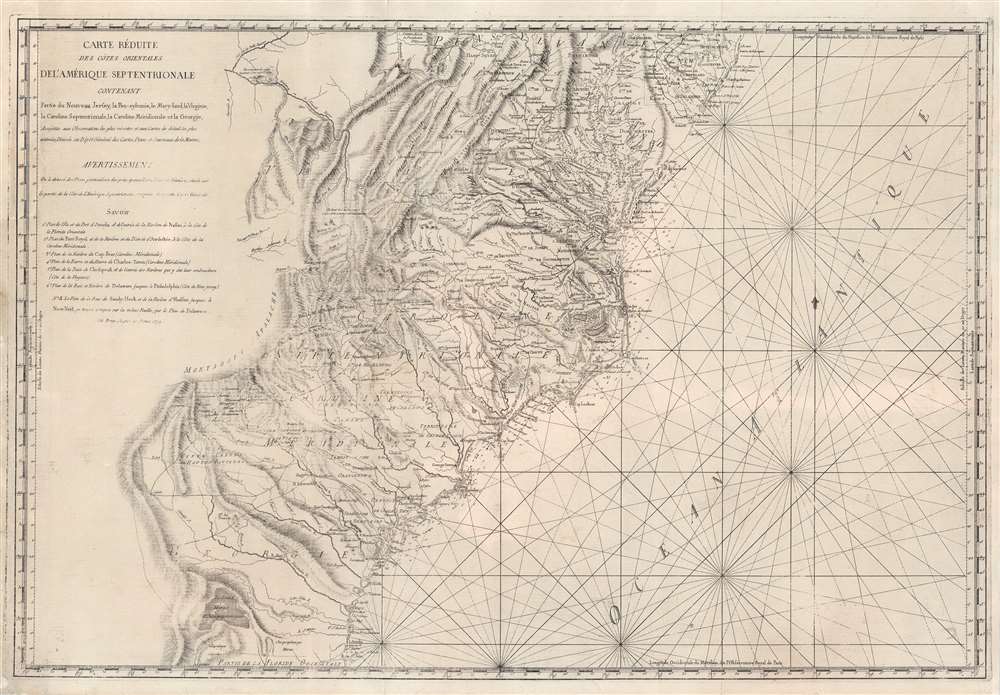 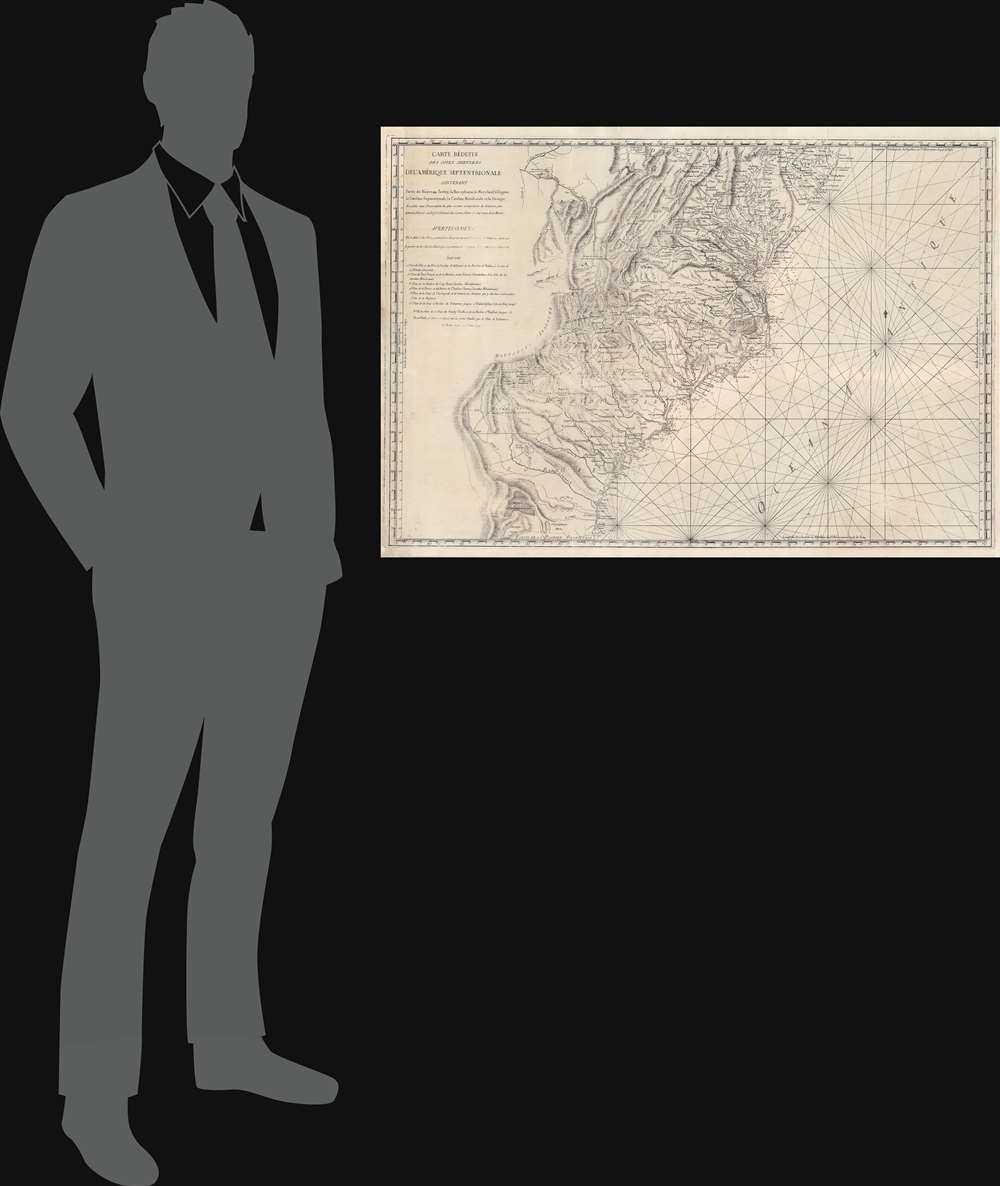 A most unusual 1799 Rome imprint of the important 1788 Sartine / Dépôt des Cartes et Plans de la Marine map of the American Mid-Atlantic seaboard. Coverage extends from New Jersey and Pennsylvania southward through Maryland and Virginia, then along the Carolina coast to Georgia and Florida. While this map was originally by the French 'Dépôt General de la Marine' in 1778, the present example bears a 1799 Rome imprint. Although a nautical chart, this map features a magnificent wealth of inland detail as far west as the Appalachian Mountains and the Ohio River.

The American Revolution and Beyond

Around the time this map was initially issued the French had been dragged into the American Revolutionary War (1775 - 1783). As a government-issue map, included in the rare Neptune Americo-Septentrional, this map would have been carried by most French naval, merchant marine, and other military commanders. While the French contribution to the American Revolutionary War was primarily naval, the military nature of this map gives us some insight into the superb inland detail offered. We may safely surmise that such rich inland and topographic details would have been invaluable to any French forces that may have been grounded or forced to wage a land campaign. Details political and topographical features ranging from colonial borders to rivers and swamps, such as the Okefenokee in Georgia. Shows the American Indian holdings in western Georgia, the Carolinas and Virginia. The map also gives special attention to churches, missions and more specifically religious congregations, listing the Quakers, the 'Assemblent les Non-confirmistes,' and others. The 'Non-confirmistes' are a curious element of this map. Though to the Catholic French, this could have referred to Anglicans, Puritans, or any other Protestant group, the general location of the 'Assemblent,' in western North Carolina, suggests the possibly that they were Franklinites. The coastline is dotted with innumerable detailed depth soundings. The location of the Catawba Indians 'Catawbaw Town' is shown south of Charlotte. In Virginia, the town of York is noted on the York River, where we now recognize Yorktown. One can easily imagine that the French Admiral De Grasse consulting a version of this map when, in 1781, his blockade of the York River forced the surrender of Cornwallis' British forces at Yorktown, effectively ending the American Revolutionary War.

This map was first commissioned by Antoine de Sartine for inclusion in the Neptune Americo-Septentrional. Although not named here, the plate was engraved by Petit. The present state of the most is most unusual, bearing the 'Giovanni Brun Roma' imprint. We can only postulate that the original Dépôt des Cartes plate, having become worn and out of date, was sold to a commercial publisher in Rome - who it appears produced most of the North America maps from the Neptune Americo-Septentrional. The publisher in Rome, Giovanni Brun, has revised the plate considerably to remove the Dépôt des Cartes insignia and add his own advertisement. We see no other known examples of this Italian edition.

Giovanni Brun (fl. c. 1748 - 1800) was an Italian engraver active in Rome in the second half of the 18th century. His work mostly consists of view and plans of Rome, geared towards the tourist market. In his later year he also reissued the=North America maps from the French nautical atlas, Neptune Americo-Septentrional. Learn More...


Antoine de Sartine (July 12, 1729 - September 7, 1801) was a competent, ruthless, and extravagant figure who dominated Paris for nearly 15 years. Formally Antoine Raymond Jean Gualbert Gabriel de Sartine, comte d'Alby, Sartine was born in Barcelona, Spain, the son of French financier Antoine Sartine. Upon the death of his mother, young Antoine was sent to Paris to be educated in Law. Following his studies, Sartine purchased the commission of Criminal Lieutenant of Police and was subsequently ennobled. A favorite of the King, he was soon appointed Lieutenant General of Police in 1759. This effectively made him dominant local power in Paris. Despite his purchased commission, Sartine proved to be a competent and effective city administrator. Paris flourished under his care, he restored public buildings, founded schools, improved finances, and tempered police corruption. He was also head of the French Intelligence organization, at the time the envy of Europe, and reported daily to the King with all of the city's gossip and scandals. This earned him the 1775 commission of Secretary of State for the Navy and the honorific rank of Minister of State. Sartine proceeded to expand and advance the French navy in competition with England. His influence put the French in a position to aid the American Revolutionaries against the British at the close of the Revolutionary War. It was during his tenure as head of the French Navy that Sartine ordered the creation of numerous updated nautical charts. Sartine's expansion of the Navy was reconsidered and deplored for its depletion of the French national treasury. As a result he was dismissed with honors in 1780. Following his dismissal, M. Sartine remained in Paris until the outbreak of the French Revolution. Unpopular with the French citizenry for his work as Police Lieutenant, he wisely fled to his childhood home of Barcelona, Spain. This no doubt saved his life as his son, who chose to stay behind, was shortly thereafter arrested and condemned to execution. Antoine de Sartine died in Tarragona, Spain in 1801. Learn More...