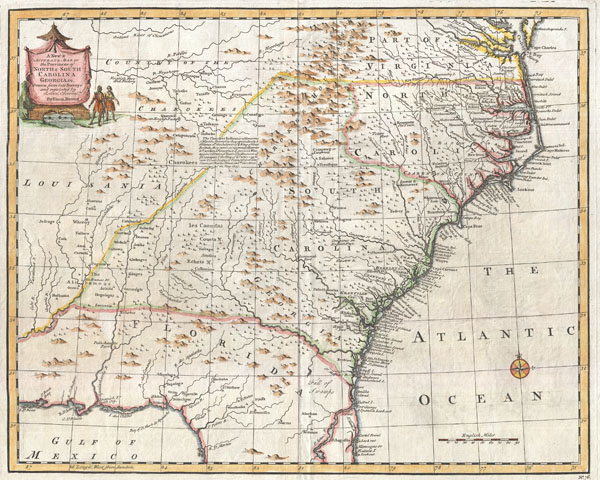 An important and fascinating mapping of the American Southeast just prior to the French and Indian War.

This is Emmanuel Bowen's remarkable 1747 chart of the southeastern parts of North America. Covers from the mouth of the Chesapeake Bay to St. Augustine, FL, and from Louisiana to the Atlantic. Introduced in the second edition of Bowen's important Complete System of Geography, this map is loosely based on the cartographic conventions established by Popple's seminal 1733 map of the British Empire in America. Though Popple's map covered most of the continent, Bowen narrows his focus to the interesting area is today the American Southeast. The colonial boundaries of North Carolina, Virginia, South Carolina and Florida are clearly demarcated but, upon close examination, somewhat ambiguous in form. The coast lands, particularly in the Carolinas are well settled and exhibit considerable European development, however, only a short distance inland European settlements quickly give way to unexplored lands and the territories claimed by powerful American Indian nations. It is no mistake that Bowen chooses to include significant portions of both Spanish controlled Florida and French controlled Louisiana in the extreme southern and western parts of his maps. The French and Spanish had long been considered a serious threat to British hegemony in this region. In response to French incursions out of Louisiana the British forged a number of alliances with various indigenous groups, most specifically a 1745 treaty with the Cherokee and Catawaa tribes in what is today Kentucky and Tennessee. This alliance, of which Bowen makes a large notation in the center of his map, created a critical buffer zone between the French and British Empires in America. At the same time it opened Cherokee lands to British merchants and traders, as is evidenced by several English factories and forts appearing in the Cherokee dominated portion of what is ostensibly French Louisiana. Even so, it was from the south and the great Spanish bastion of St. Augustine that the British in America felt the greatest threat. It was partially in response to this and the need to develop the southern portions of Britian's American holdings, that lead to the founding of the Georgia colony in 1733. Just thirteen years after its founding in Savannah, we see the Georgia colony well defended through a series of fortifications and towns both along the coast and dotting the inland river ways. South of the border, in Florida, the Okefenokee Swamp separates Spanish and British dominions. Here two we can read a clear differentiation in colonizing philosophy. Where the British rely on treaties, settlement, and commercial development to further their interest in American Indian held lands, the Spanish dot the countryside with missions. In the northern part of Florida alone seven missions are identified: St. Francisco, St. Peter, St Mathew, St. John, St. Paul and St. Mark. All and all, this is an extraordinarily interesting and essential map for any serious collection focusing on the American Southwest. Published as plate no. 76 in the 1747 second edition of Bowen's Complete System of Geography.