1770 Bonne Map of the Arabian Peninsula 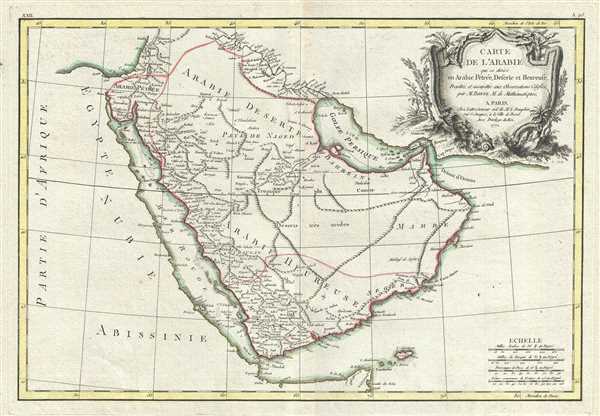 1770 Bonne Map of the Arabian Peninsula

This is an appealing 1771 decorative map of the Arabian Peninsula by Rigobert Bonne. Covers from the Mediterranean to the Indian Ocean and from the Red Sea to the Persian Gulf. Includes the modern day nations of Saudi Arabia, Israel, Jordan, Kuwait, Iraq, Yemen, Oman, the United Arab Emirates, and Bahrain. Names Mt. Sinai, Mecca and Jerusalem as well as countless other cities and desert oases. Also notes numerous offshore shoals, reefs, and other dangers in the Red Sea and the Persian Gulf.

As this map was being prepared, the eastern portions including Turkey, Arabia, and most of the modern day Middle east, were under the waning hegemony of the Ottoman Empire. In Arabia, the first 'Saudi State' had already been established in 1744 and, though owing nominal allegiance to Istanbul, dominated much of the central Arabian Peninsula. The presumably more valuable coastal lands and river valleys of Mesopotamia (modern day Iraq) remained under direct Ottoman suzerainty.

There is a large decorative title cartouche in the upper right hand quadrant. A fine map of the region. Drawn by R. Bonne in 1771 for issue as plate no. A 25 in Jean Lattre's Atlas Moderne.