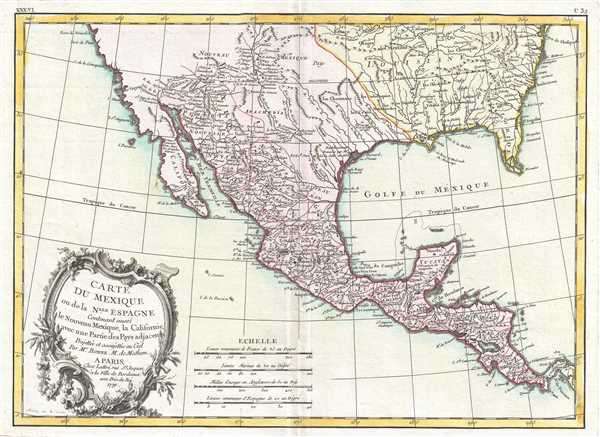 Representation of the Spanish holdings in North America.

This is a 1771 Rigobert Bonne map of Mexico and Florida. The map depicts the region from Baja California eastward to Florida and Carolina, and from the northwards mouth of the Chesapeake Bay to Panama. Bonne, being a very cautious cartographer, abandons many of the fictitious elements common to many period maps of this region, thus most unexplored areas are left blank. Being primarily a map of Mexico and the Spanish holdings in North America, this excellent map details the various Mexican states naming countless towns, villages, and haciendas. North of Spanish Mexico lies the vast and largely unknown American West, where numerous missionary stations along the Rio Bravo or Rivera du Nord (Rio Grande) are identified, extending well north into New Mexico towards Santa Fe. Several American Indian groups who traded with the French in Louisiana are also included. Another oddity is the rendering of southern Florida as an archipelago, a primitive attempt at describing the Everglades.

This map was drawn by Rigobert Bonne in 1771 for issue as plate no. C 32 in Jean Lattre's Atlas Moderne.