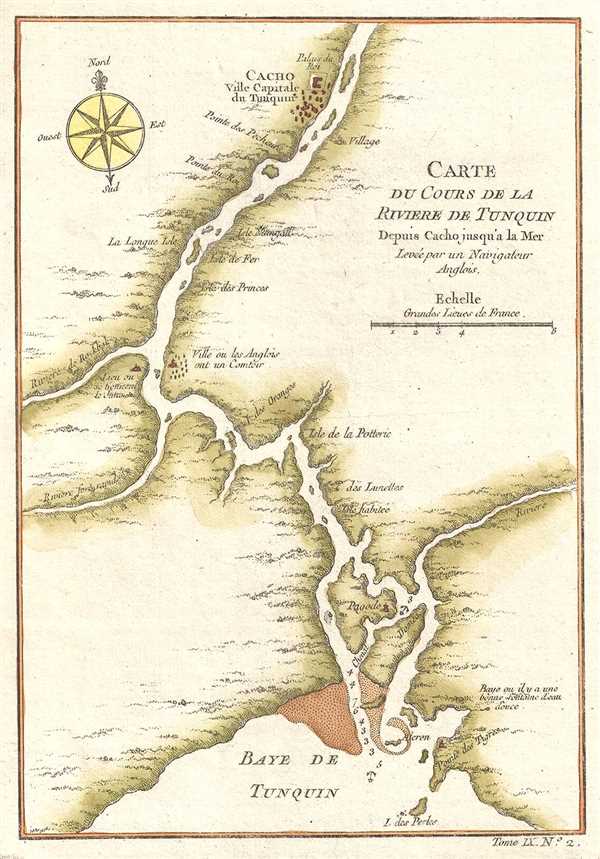 Map of the Red River (Sông Hồng), Vietnam, including the capital city of Hanoi, then called Cacho.

This is a hand colored 1750 Jacques Nicholas Bellin map of the Tonkin (Tunquin) River, Vietnam. The map depicts the river's course from Cacho (modern Hanoi) to the Bay of Tonkin. The map is oriented slightly to the northeast, as depicted by a compass in the upper left corner. At Cacho, the lap makes special note of the Royal Palace and depicts a collection of buildings around it. Along the course of the river, the map notes several waypoints, most of which are islands, but the map depicts a city 'where the English have a bar.' A pagoda is also depicted on an island near the bay. As the river nears the bay, depth soundings are given, as well as two locations that would serve as a suitable anchorage, which are denoted by anchors.

This map was produced by Jaques Nicholas Bellin for inclusion in Abbé Prévost's Histoire Générale des Voyages, volume IX in 1750.