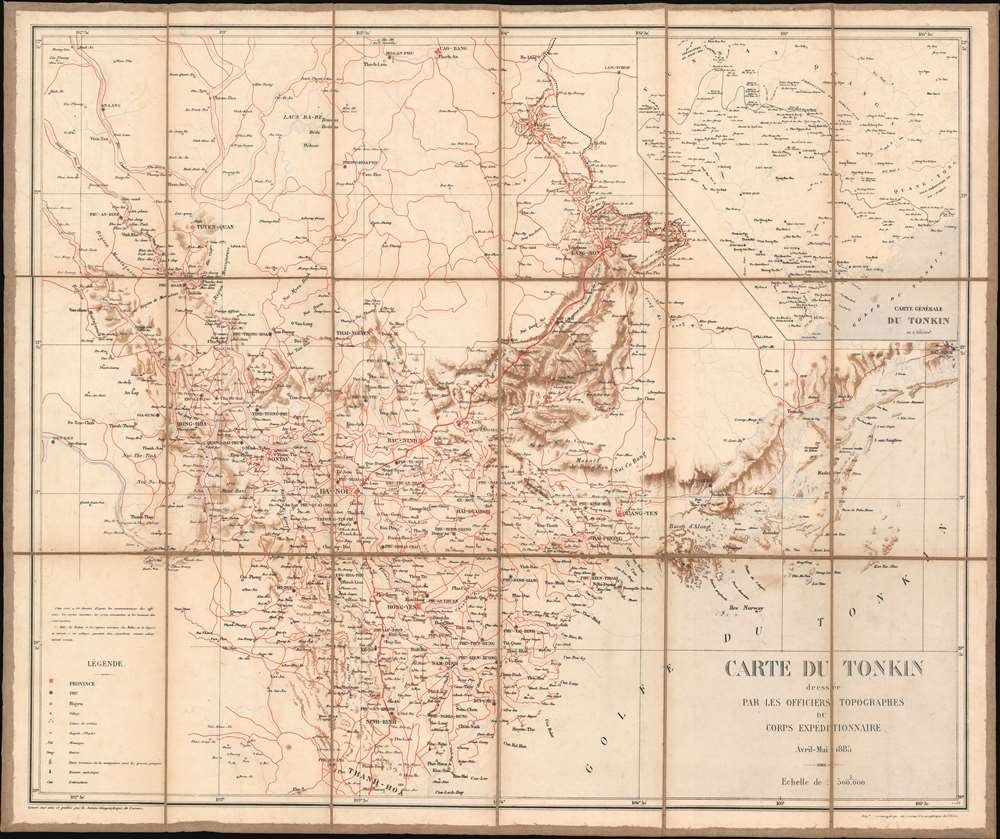 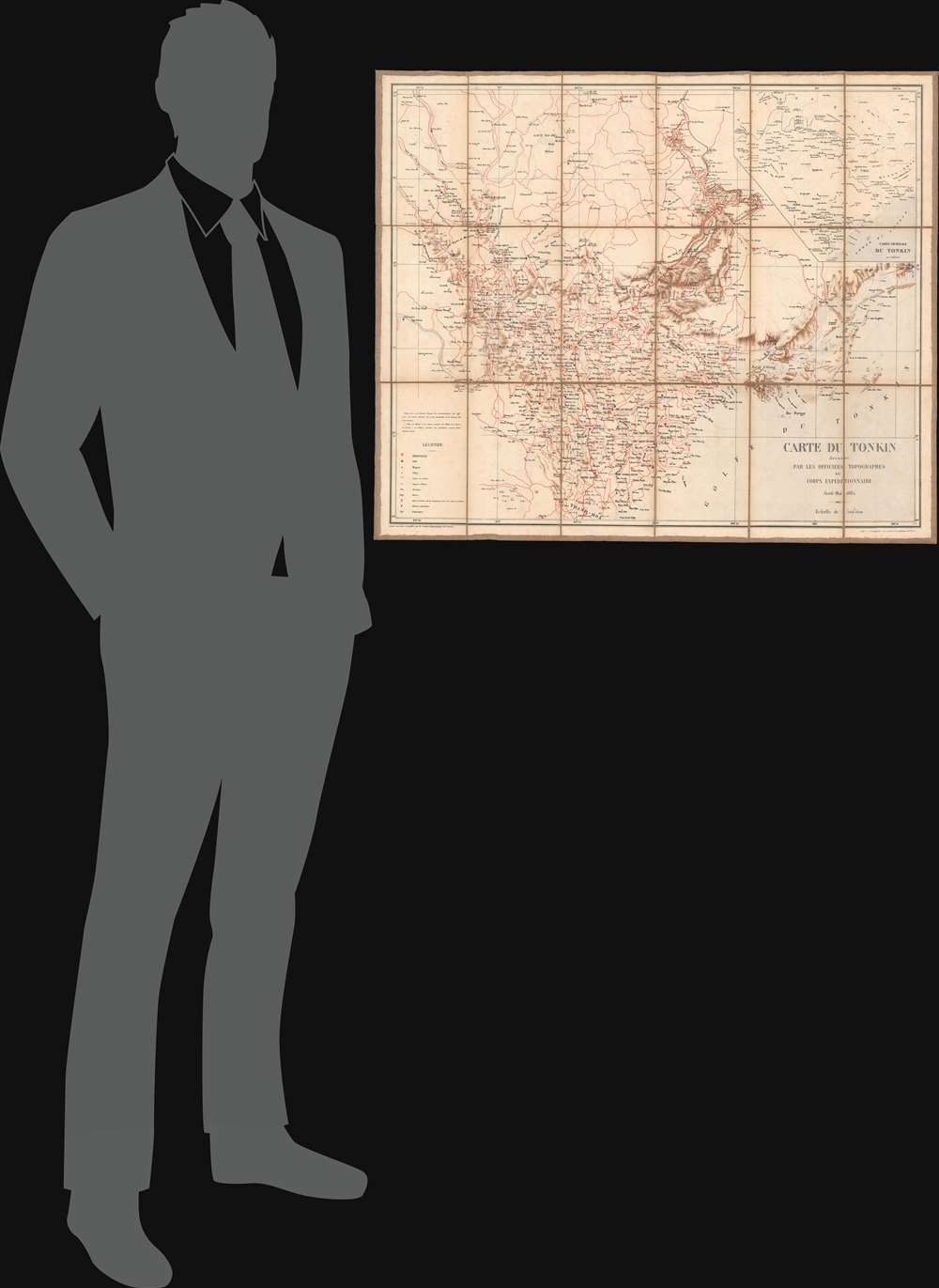 This is an 1885 French Service Géographique de l'Armée map of Tonkin, the northern region of modern-day Vietnam, then French Indochina. This map was published for the French army just after the end of the Sino-French War. Red lines trace roads throughout the region and red crossed swords mark battlefields. The map focuses on the Red River Delta and uses the Vietnamese word cua to identify the many rivers along the Gulf of Tonkin. An inset in the upper right corner presents a broader regional overview, from Yunnan in China south to the Red River Delta.

The Sino-French War was fought between France and China. The French first arrived in Vietnam under Louis XVI in 1785. Organized colonization efforts did not begin until 1867 when they colonized the southern third of the country. French aspirations reached farther than Saigon, and they soon signed a treaty with the Vietnamese granting them control of the Red River and Hanoi. The French captured Hanoi in 1882 and were granted a protectorate over Annam (central Vietnam) and Tonkin (northern Vietnam). This development rankled the Chinese, who believed Tonkin and the Red River to be within their sphere of influence. The Chinese then supported the Black Flags, a well-organized group of bandits and anti-French guerillas. The French suffered a disastrous defeat to the Black Flags in May 1883. Tensions continued to mount between France and China, with several battles between the French and the Black Flags also involving nominal Chinese support for the Vietnamese.

The Tientsin Accord, the Bac Le Ambush, and All-Out War

By Spring 1884, the French hoped to avoid an all-out war with the Chinese. This led to the Tientsin Accord, signed in May 1884, which stated formal Chinese recognition of French protectorates in Tonkin and Annam and called for the withdrawal of Chinese troops from Tonkin. The Chinese would receive in return a comprehensive treaty with France that formalized trade and commerce between the two powers and set an official boundary between China and Vietnam. Nonetheless, in early June, a French column encountered a group of Chinese troops in a defensive entrenchment. Instead of asking Hanoi for instructions on how to proceed, the commander demanded the Chinese to withdraw. The Chinese refused and the French commander advanced. The column was encircled and nearly wiped out. This precipitated all-out war between the French and the Chinese. Battles were fought in Fuzhou, China and Formosa (Taiwan) was blockaded. The critical campaign, the Lang Son Campaign, began in February 1885. The French won hard-fought victories, but with high losses. Nonetheless, the French kept pushing to expel the Chinese, an effort that overstretched their vastly outnumbered forces. This forced a French retreat. This abandonment caused an uproar in France, the collapse of Jules Ferry's government, and forced the French and Chinese to finally sign a treaty in June 1885.

This map was created by troops of the French Expeditionary Corps in Tonkin and engraved and printed by the Service géographique de l'armée in 1885. Two examples are cataloged in OCLC and are part of the collections at the Muséum national d'histoire naturelle in Paris and the Bibliothèque nationale et universitaire in Strasbourg.

The Service géographique de l'armée (1887 - Present) was created from the French Dépot de la guerre in 1887 and was charged with undertaking all the geodesic, topographic, and cartographic needs of the French army during times of peace and war. The Service was divided into five sections: Geodesy, the Levés de précision, topography, cartography, and accounting. The accounting section dealt with the logistical side of running the Service géographique, including the distribution and shipping of its products. Learn More...

Very good. Dissected and mounted on linen in eighteen (18) panels.