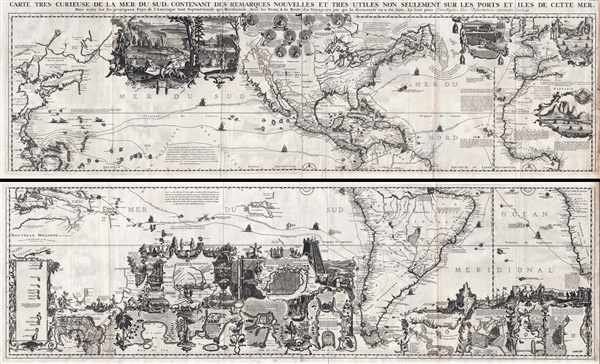 One of the most beautiful and sumptuously illustrated maps of the 18th century.

One of the most spectacularly decorative maps of the 18th century, this is Henri Chatelain's magnificent 1719 map of the Americas and the Pacific. This sumptuously engraved map is centered on the American continent, but extends west to include all of the pacific as far as Beijing (Peking), China and Australia, and eastward to include much of Europe and the western half of Africa. Longitudinally it extends from the Hudson Bay to the southern tip of Tierra del Fuego. The map is graphically rich with a wealth of lush inset maps and vignette illustrations throughout. The whole is further embellished with copious annotation offering Chatelain's insights on local traditions, flora and fauna, political commentary, and notes on trade.

Cartographically, Chatelain based this map heavily on De Fer's map of 1713. There is much of interest throughout. This map was issued just as the world was being opened to international commerce and Chatelain has much to say on the subject. Chatelain doubtless imagined himself on the cusp of an age of discovery and exploration unlike any before imagined – and he was right! Still, one cannot ignore his hopeful thinking. Here both the Atlantic and Pacific oceans are remarkably foreshortened, suggesting that passage and trade between these widely divided continents to be a matter of ease. The routes of the many explorers who made these passages are noted with their ships illustrated. These include Columbus, Vespucci, Magellan, Drake, Schouten, La Salle, and Dampier, among others, all of whom are further lionized by a serious of medallions filing the unexplored northwestern quadrants of America. The elaborate decorative vignette work, too, contributes to Chatelain's message. In North America he borrows from Herman Moll to illustrated the astounding American fur trade (with a backdrop of Niagara Falls) and the seeming boundless cod fisheries off the Grand Banks. The even more elaborate illustrations in in the southern portion of this map are equally suggestive of the wealth to be had by venturing not just to the America's but into the Pacific and thence to Asia. The vignettes include illustrations of tribal life, rich mines, overflowing hunting grounds, native industry, such as the grinding of manioc, and of course the whale fishery. Among this rich imagery are smaller maps and plans detailing the Spice Islands (Moluques), the apparently easily traversable Isthmus of Panama, and the port of Acapulco in Mexico from which the Spanish galleons set sail for Manila; as well as the bustling ports of Baldavia, Veracruz, Conception, Buenos Aires, Havana, and San Sabastian, among others. Among these, of course, we cannot ignore the many dangers illustrated in the form of vicious animals, unfriendly natives, and one particularly grizzly image of human sacrifice before a stylized Aztec pyramid.

This is importantly of the first maps to bring into question the popular convention of rendering California as an island. While California is here presented roughly on the Luke Foxe model popularized by Nicholas Sanson in 1657, one notes that the northern portions of the island are ghosted in an expression of uncertainty. Around this time, word of the Jesuit missionary Eusebio Kino's discoveries in and around Baja were beginning to circulate in learned circles. Although the myth of an insular California was slow to disappear, Chatelain here notes

What some moderns believe to be attached to the continent of America by the northern part.

Chatelain's rendering of the Pacific is of considerable interest. The widely overlarge mapping of the Solomon Islands, referencing the navigations of Mendana and Quiros, stand out. Australia itself, appearing here as Nouvelle Hollande, is embryonically mapped with discoveries associated with the Dutch explorer Dirk Hartog dating as early as 1619 (Terre d'Edels) noted. The Gulf of Carpentaria, discovered by the Dutchmen Willem Janszoon in 1605-06, is recognizable. Near here the Solomon Islands are remapped near the amorphously formed Terre de Quir, which seems to erroneously give the largely failed navigator, Pedro Fernendez de Quir, credit with discovering eastern Australia. Far to the south Van Diemen's Land or Tasmania, discovered by Abel Tasman in 1642, is noted but far from the greater continent of Australia.

Hokkaido (Terre de Jesso ou Eso) is attached to the Asian mainland. Just to the northeast of Japan, separated from the mainland by the Detroit d'Vries, we find Terre de La Compagnie, or, as it is sometimes known, Terre de Gama. Often mapped together, these lands, Gama and Terre de la Compagnie, appear here according to the explorations of Maerten de Vries and Cornelis Jansz Coen, who explored this land in 1643 in search of the gold and silver rich islands mentioned in Spanish legends of a mysterious navigator named Juan de Gama's. They discovered the Japanese Kurile Islands and mapped the strait, Detroit d'Vries, between the actual islands of Kunashir (unnamed) and Iturup (Compagnie). Vries and Coen were also the first European navigators to discover Sakhalin and map its southern coastline. Apparently their ship, the Castricum, was mired in a heavy fog as it attempted to explore these seas thus they failed to notice the strait separating Edo (Hokkaido) from Sakhalin, initiating a cartographic error that would persist well into the 18th century. In 1729, Bering he spent three days in the region looking for Juan de Gama's island but never found it. Even so, these curious islands remained on maps for about 50 years following Bering's voyages until the explorations of Cook confirmed the Bering findings.

This map was issued in volume 7 of Chatelain's Atlas Historique ou Nouvelle Introduction à l’histoire à la Chronologie et à la Géographe Ancienne et Moderne. It was engraved by Bernard Picart and is the finest map to be found in the whole of Chatelain's work. The map was issued uncolored, as here, but many chose to have it colorized and the panels joined to create a single massive and dramatic showpiece map. Since the currently impression is exceptionally rich and vivid, we have decided to offer the map in its original as published state.