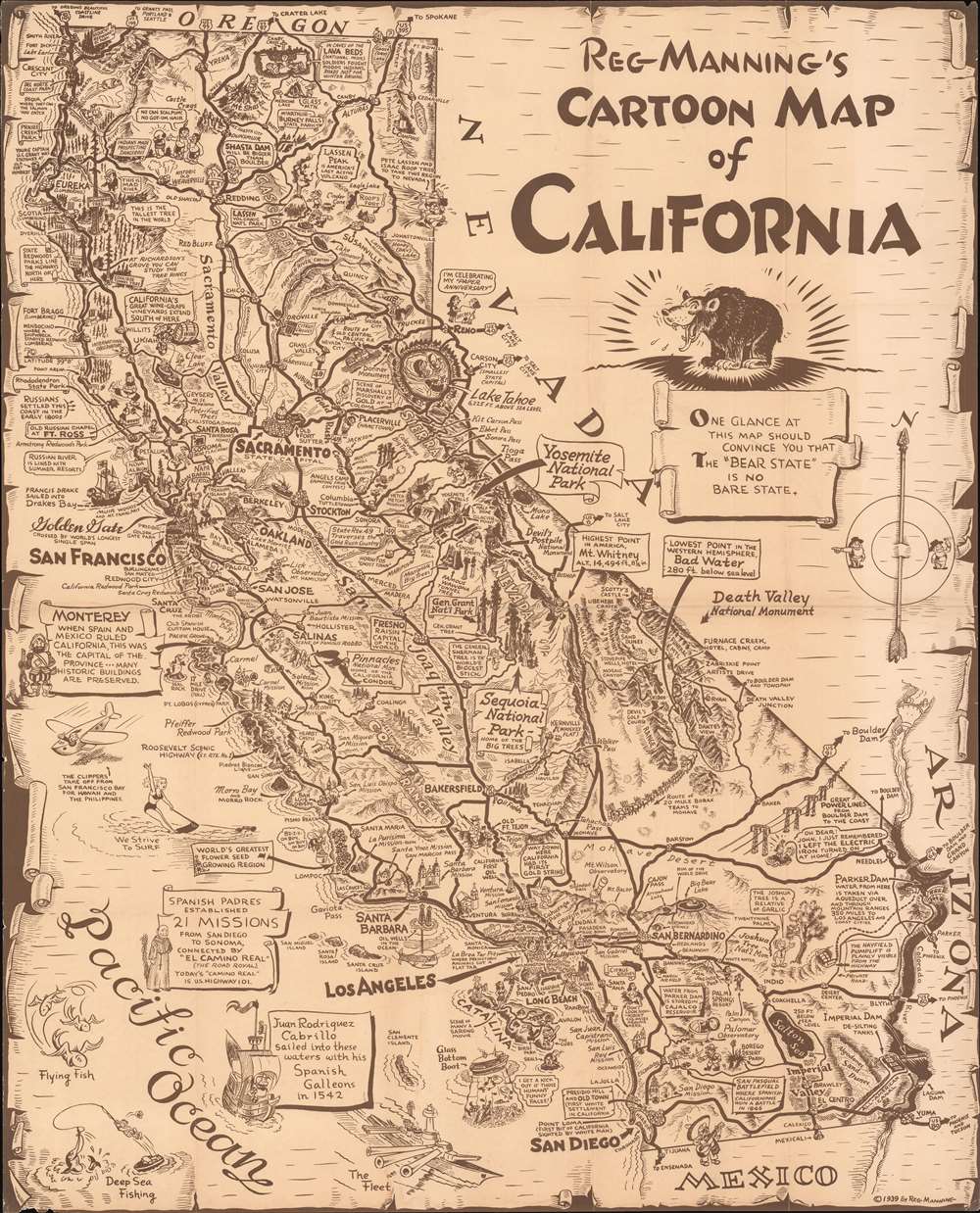 Drawn as if on an aging piece of parchment, this is Reg Manning's 1939 cartoon pictorial map of California. Comic vignettes fill the state from the Oregon border to Mexico and recount episode's in the state's history or personify parts of its landscape. Some of these, like Pete Lassen and Isaac Roop literally pulling on part of California to try and annex it to Nevada evoke a smile and a chuckle. Others, like soldiers and Native Americans fighting in the lava beds or a man hanging in Placerville (apparently also known as Hangtown), try to put a lighter spin on the darker parts of American history. The comic is never too far away, however. Mount Baldy, for example, is personified by a bald man's head. A frog marks Angel's Camp, known for its jumping frog contest. National parks, including Sequoia and Yosemite, are prominently labeled. The state's many prominent cities are illustrated and labeled as well, with sites such as the Golden Gate Bridge, Alcatraz, the California Capitol Building, and the La Brea Tar Pits making appearances.

This map was created and published in 1939 by Reg Manning. An example is part of the David Rumsey Map Collection, and the map occasionally appears on the private market.

Reginald W. Manning (April 8, 1905 – March 10, 1986), professionally known as Reg Manning, was an American illustrator and artist. Born in Kansas City, Missouri, Manning soon ended up in Phoenix, Arizona, where he received his only formal art training as a high school student. Following graduation, Manning worked as a freelancer until he was hired by The Arizona Republic as an artist and photographer in 1926. Originally interested in comic strips, the popularity of Manning’s editorial cartoons pushed him toward that genre. By the end of his career, Manning’s editorial cartoons were syndicated in as many as 170 newspapers. Manning also created incredible copper wheel engravings on crystal glass. Over the course of his career, he also created stationery, jewelry, water colors, and postcards. Manning died in Scottsdale, Arizona. Learn More...