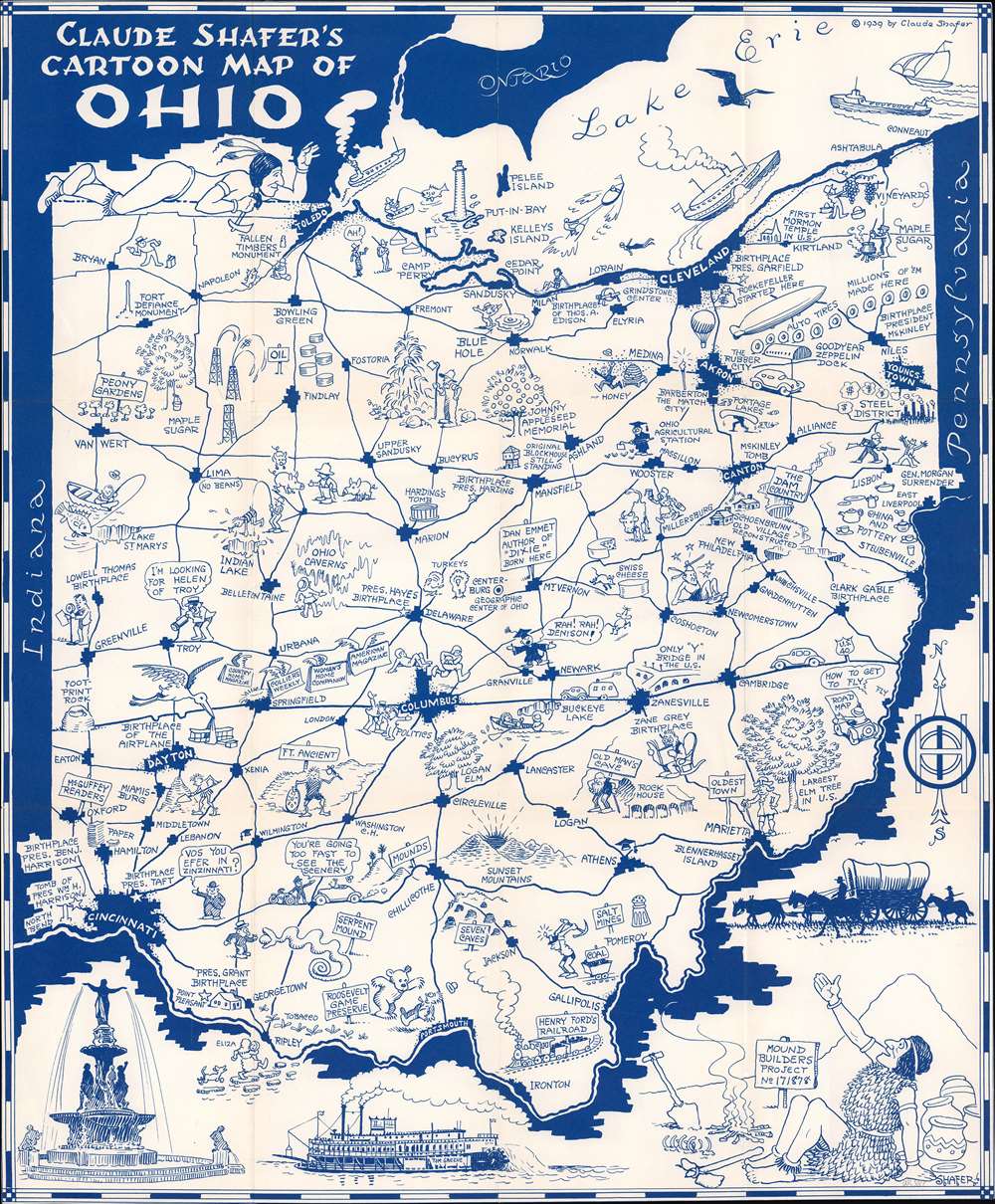 This is a 1939 Claude Shafer pictorial map of Ohio. Shafer, a cartoonist celebrated in Ohio for his wit, combines historical events with pictorial depictions of important sites. A stork carries a Wright Flyer in a sling, much as it might a baby, near Dayton, labeled as the 'birthplace of the airplane'. Ohio's famous mounds are illustrated, along with Fort Ancient, and the Serpent Mound. The Johnny Appleseed Memorial is referenced, as are McGuffey Readers in Oxford and Collier's Weekly in Springfield. The state's many resources are illustrated, including salt and coal mines, oil wells, the rubber plant in Akron, and the Youngstown steel district. Shafer's wit shines in several places, including the illustration of a man 'looking for Helen of Troy' in Troy, Ohio and a bear scaring the daylights out of a man in the Roosevelt Game Preserve.

This map was drawn by Claude Shafer and published with Claude Shafer's Cartoon Guide of Ohio in 1939. The book is well represented in institutional collections, but no separate examples of the map appear in OCLC. The book and the map are both scarce on the private market.

Claude Shafer (January 7, 1878 - May 24, 1962) was an American cartoonist. Born on a farm near Marietta, Ohio, Shafer's family moved around before settling in Cincinnati in the 1880s. He showed artistic talent at an early age. When he was nine, his teachers raised money for tuition at the Cincinnati Art Academy. After his father died of cholera in 1892, Shafer went to work at Conner's Watch, Clock, and Jewelry Store as a clerk. Shafer began his city-five year newspaper career on April Fool's Day 1901, when he took a job with the Cincinnati Times-Star. The Cincinnati Post lured him away later that same year. He worked for the Post for a decade before moving on to the Enquirer. Shafer served in World War I and sent cartoons to the Post from England and France. After the war, Shafer returned to his job at the Post until he moved to the Cincinnati Times Star in 1926, where he worked until he retired in 1956. Shafter was known for several memorable characters, including 'Old Man Grump' (who would celebrate Cincinnati Reds losses and pout after their wins) and the 'Doodlebugs'. He married Kitty Wiederecht in 1925, with some references suggesting the pair married as early as 1909, divorced in 1923, and remarried in 1925. They did not have children. Learn More...