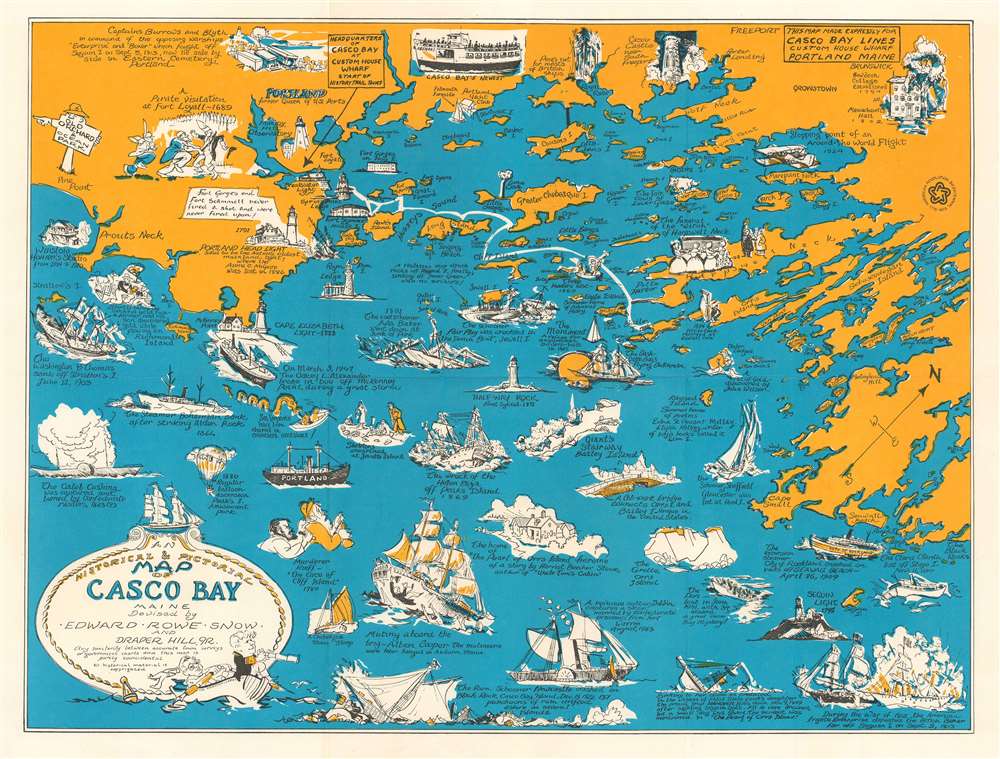 This is a charming 1976 Edward Rowe Snow and Draper Hill, Jr. pictorial and historical map of Casco Bay, Maine. It depicts Casco Bay, an inlet of the Gulf of Maine on the southern coast of Maine, from Prouts Neck (Scarborough Beach State Park) east as far as the southern portion of Georgetown Island, including the city of Portland. Towns and villages are labeled throughout, as are the numerous small islands sprinkled within the bay.

Vignettes scattered from one end of the map to the other highlight historical events and important local sites. Some of the historical events referenced include the funeral of the 'witch' of Harpswell Neck, a pirate raid on Fort Loyall in 1689, numerous shipwrecks, the victory of the American frigate Enterprise during the War of 1812, and 'countless' sightings of sea serpents. The region's many lighthouses are illustrated in profile, some of which also have their date of completion provided. One of these, the Portland Head Light, is said to be the oldest mainland lighthouse in the United States. Other vignettes illustrate the Casco Castle near South Freeport and the pines cut for masts of British ships.

Editions of this map were originally published c. 1950. The present example, however, appears to have been a special reissue created for the celebration of the American Bicentennial in 1976. Aside from the insignia marking this piece as being part of the Bicentennial celebration, two other notes have been added. One states, 'This map made expressly for Casco Bay Lines Custom House Wharf Portland Maine' and the other points out the 'Headquarters of Casco Bay at Custom House Wharf Start of History Trail Tours'.

This map was created by Edward Rowe Snow and Draper Hill, Jr., and, as stated above, was originally published c. 1950. This example was reissued in 1976 by Casco Bay Lines. Three examples of the 1976 edition are catalogued in the OCLC and are part of the collections at the Library of Congress, the Columbus Metropolitan Library, and the Ball State University Library.