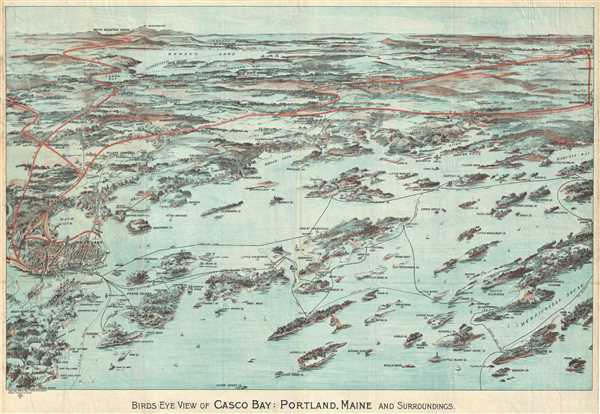 This is a beautiful 1906 bird’s eye-view map of Casco Bay, Portland, Maine issued by George Walker and Co. It covers Casco Bay, an inlet of the Gulf of Maine on the southern coast of Maine, from Port Elizabeth and South Portland with Rangeley Lakes and Mount Washington in New Hampshire on the horizon. The city of Portland is beautifully rendered. Throughout, the map notes towns, islands, capes, points and a few other topographical features. The bustling bay is shown full of ships and ferries traveling between its various islands and cities. This map is copyrighted and issued by Geo H. Walker and Co. in 1906.

Very good. Minor wear along original folds. Professionally flattened and backed with archival tissue.
Looking for a high-resolution scan of this?