1848 Vandermeren Map of the Catacombs of Callixtus, Rome 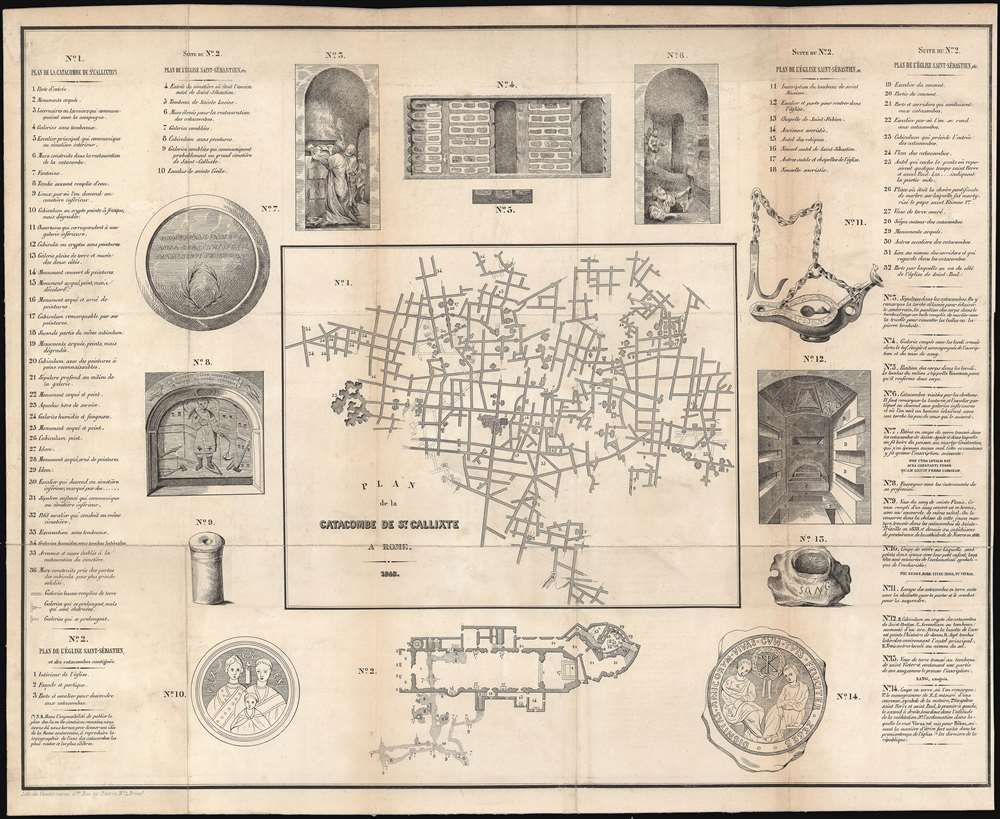 1848 Vandermeren Map of the Catacombs of Callixtus, Rome

The Catacombs of Rome!

This is a scarce 1848 plan or map of the Catacombs of Callixtus in Rome. The detailed map covers the cemetery complex noting its subterranean galleries and recesses for individual Tombs. Surrounding the map are illustrations of various artifacts and scenes, as well as a plan the Church of St. Sebastian at the Catacombs. A numerical list to the left and right of the map proper references numbered locations on the map.

The Catacombs of Callixtus were constructed in the 3rd Century at the order of then future Pope Callixtus I, who at the time was the Deacon of Rome. Callixtus enlarged the pre-existing Christian Hypogeum on the Via Appia. The Catacombs are part of the larger Complesso Callistiano, occupying some 30 hectares and descending 5 levels underground. The Catacombs of Calixtus are most famous for containing the Crypt of the Popes, the final resting place of numerous pontiffs from the 2nd to the 4th centuries.

This map was published to accompany Joseph Gaume's (1802 - 1879) Les trois Rome. Journal d'un voyage en Italie. It is not clear if this map accompanied all issues, but it does appear in the 1849 German Edition, where it has been re-engraved in German. Examples of the separate map are scarce and the map is not referenced in the OCLC.

Vandermeren (fl. c. 1838 - 1851) was a Belgian lithographer based in Brussels. His maintained offices at no. 1 Grande Rue au Beurre (today just Rue de Buerre). We have been unable to find any further trade of Vandermeren the printer, but the Almanach Royal et du Commerce de Belgique for 1838, and the Almanach du Commerce et de L'Industrie Belgium of 1851, both identify a Vandermeren at this address working as a lingerie seller and laundress. It is unclear how printing is related.

Very good. Laid down on old linen. Original folds exhibit some wear. Even toning.
Looking for a high-resolution scan of this?