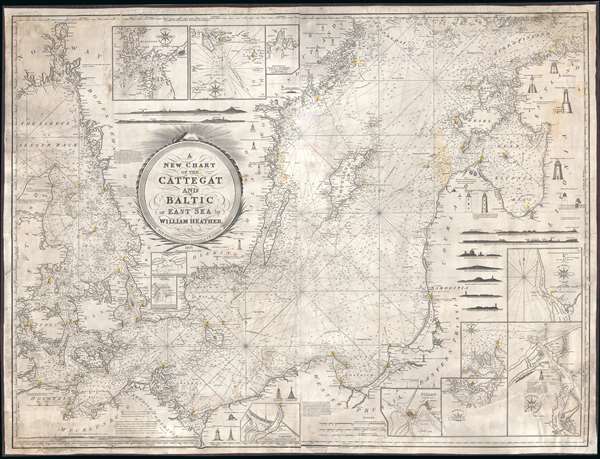 Extremely rare nautical chart of the Kattegat and Baltic Seas.

This is an extremely rare and extraordinarily beautiful 1837 William Heather and John William Norie blueback nautical chart or maritime map of the Kattegat and Baltic Seas. The map depicts the region from Norway and Denmark (Jutland) to the Baltic States of Estonia and Latvia (Eastland, Livonia, Courland) and from Norway and the Gulf of Finland to northern Europe. The map is highly detailed with numerous cities are labeled, including Copenhagen, Stockholm (Christiana), Gdańsk (Danzig), Talinn (Revel), and Riga. Myriad depth soundings are indicated, particularly in the Kattegat Sea and along the coastlines. Numerous inset maps are included along three of the four sides. Along the top border, three inset maps situated and illustrate the entrances to Gothenburg, the principal entrance to Stockholm, and the harbor of Sleete or Slitehamn, on the island of Gottland. Along the right side and bottom border, inset maps depict the entrance to Klaipėda (Memel), Lithuania, Riga, Rogerwyck, the entrance to Szczecin (Stettin), Poland, Baltiysk, Poland, and a second inset map illustrating the entrance to Szczecin. Manuscript notations in yellow ink throughout the map mark the locations of lighthouses and other lights used for navigation. Twenty-eight different lighthouses are illustrated in profile, along with notes concerning others. One such note, located on the Jutland Peninsula, informs the viewer that a striped flag is hoisted from the Scaw lighthouse if ice in the Kattegat impedes navigation. Other notes inform the viewer on improvements to harbors, or when the lighthouses in certain parts of the region are lit. Several coastal views are also illustrated, allowing a mariner to have a better understanding of what they should be seeing when passing a given stretch of coastline. An extremely decorative title cartouche is situated slightly to the left of center.

This map was produced by John William Norie in 1933 with additions to 1837. This map was first published in 1801 by William Heather and Norie. There no other known examples of this edition and only one known example of the heather 1801 edition that survive. This map is owned jointly by Geographicus and Vetus Carta Maps.

William Heather (1793 – 1812) was a British nautical chart engraver and publisher active in the late 18th and early 19th centuries. Heather was born in Lambeth but shortly after relocated with his family to the parish of Christ Church, Southwark. He was apprenticed to George Michell, a London stationer. Heather reached his maturity and became a member of the Stationers Company in 1789. His earliest known cartographic work appeared in conjunction with the offices of John Hamilton Moore, with whom he was employed. Around 1793 Heather started his own competing nautical chart business at 157 Ledenhall Street, London. This office remained the home of his firm for an astounding 85 years. Heather soon took on the Scotsman John William Norie as an apprentice Norie eventually inherited Heather's business and map plates, beginning his own long career as a maker of English blueback charts.


John William Norie (June 3, 1772 - December 24, 1843) was a British teacher of navigation, hydrographer, chart maker, and publisher of maritime manuals active in London, England in the late 18th and early 19th centuries. Norie was born in Wapping, London, an area long associated with the maritime sciences. Norie's career as a chart maker commenced under the tutelage of William Heather, a prominent purveyor and publisher of nautical charts, pilot books, and navigational tools who took over the firm of Mount and Page in 1765. Heather and Norie were likely acquainted through John Hamilton Moore, another important chart maker with whom both seem to have been associated early in their careers. Heather hired Norie to teach basic navigation at his shop at 157 Leadenhall Street. Under Heather Norie also distinguished himself as a draftsman, completing many of the early charts associated with the Heather firm. When Heather died in 1812 John Norie partnered with George Wilson, a moneyed 'man about town' with little experience in the maritime trades, to acquire the map and chart business at 9500 British Pounds. It proved a good deal for Norie, who retained all copyright privileges and drew 1/4 quarter share of business profits, as well an impressive quarterly salary and, for doing all of the work, 1/3rd of Wilson's share. The firm, referred to as the 'Naval Warehouse' quickly acquired a reputation for quality navigational materials and became a favorite of merchant seamen. It was even referenced in Charles Dickens' classic novel Dombey and Son. In 1819, Norie and Wilson acquired the failing chart business of David Steel, which significantly increased the size, though not quality, of their chart catalogue. With the rise of the British Admiralty and its own maritime chart productions, the business of "Chart Purveyor" in London dramatically changed. Admiralty charts and pilot books, designed for military use, were offered through established intermediaries, like Norie, at bargain prices. Most chart makers of the period found it profitable to use the highly technical Admiralty charts to update their own more decorative vernacular charts. For a brief time this practice proved exceptionally profitable but eventually began to draw criticism. Nonetheless, Norie retired to Edinburgh in 1840 and died a wealthy man in 1843. In 1840 the business passed to a nephew of George Wilson, Charles Wilson, who renamed the firm "Norie & Wilson". William Heather Norie, J. W. Norie's own son, produced few charts, instead pursuing a career in the legal field. Norie & Wilson merged with James Imray's prosperous chart business in 1899, becoming Imray, Laurie, Norie & Wilson, a profitable concern that remains active in the maritime charting industry.


John Stephenson (fl. c. 1790 - 1836) was a British engraver active in the London nautical chart trade in the late 19th and early 19th century. There is some speculation by Worms, Baynton-Williams, and other map scholars, that seem to suggest Stephenson apprenticed with the stationer Charles John Downes. Stephenson engraved for the nautical chart firm of John Hamilton Moore before moving on to the firm of William Heather in 1793. Heather's firm was subsequently inherited, along with Stephenson, by John William Noire. Stephenson's work is characterized by strong lines, elaborate decorative embellishment, and finely-engraved detail, it is commonly associated with John Noire.