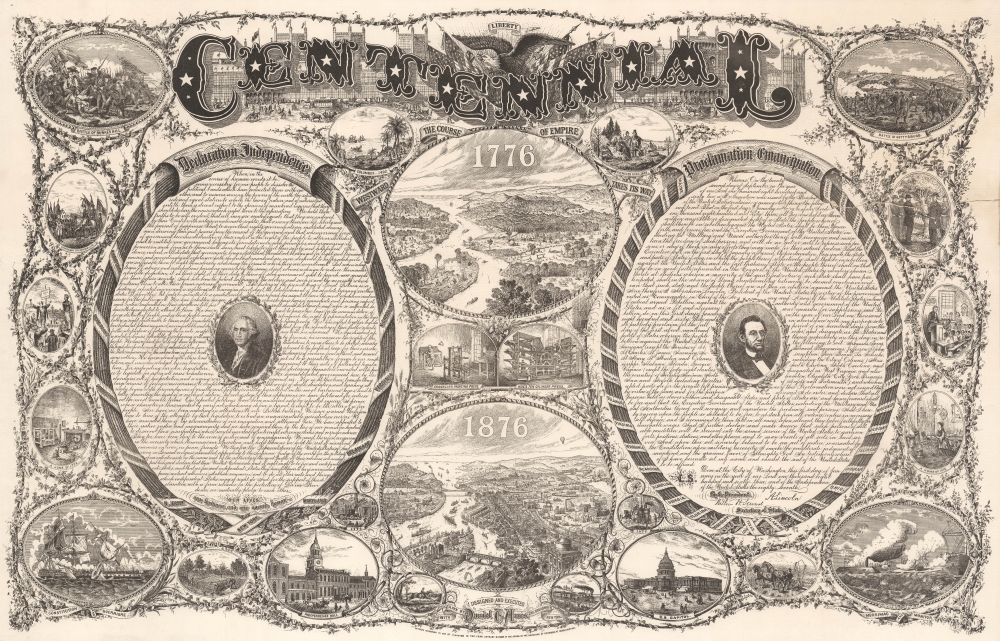 An impressive 1876 first edition broadside published by Daniel Titus Ames to celebrate 100 years of the nation. The broadside consists of two oval windows: the left featuring the Declaration of Independence and a portrait of Washington and the right the Emancipation Proclamation and a portrait of Abraham Lincoln. The full text of both documents is contained within, written in the 19th century calligraphic style known as 'engrossing', one of Ames' specialties. These windows are surrounded by elaborate floral-motive decoration and 22 vignettes illustrating important moments in American history.

Two central bird's-eye views illustrate Pittsburgh, where the confluence of the Allegheny and Monongahela Rivers form the Ohio. The upper view is dated 1776, exhibiting simple forest. The lower view, depicting 1876, presents a bustling city and gateway to the west. Some collection catalogers have suggested these views represent Philadelphia, but this is definitively not the case. Not only do they not resemble Philadelphia, but it was already a large and prosperous city in 1776. The use of Pittsburgh underscores the title banner just above 'Westward the Course of Empire Takes its Way.'

This view was published in 1876 by Daniel T. Ames. We are aware of it being issued in several formats, including a double sized edition with chromolithograph shading issued sometime later by W. Welke and James Miller. The present example, bearing only the Ames imprint, is the first edition. This view was most likely produced for sale at the 1876 Philadelphia Centennial Exposition and the elaborate buildings behind the title are likely the exposition halls. The view is scarce. Institutional collection records indicate one example at the Yale, and another at the Newberry, both the Welke/Miller second edition. We note just one example on the market in the last 20 years.

Daniel Titus Ames (December 19, 1835 - August 26, 1909) was an American lawyer, publisher, artist, calligrapher, and 'penman' active in Vermont, New York, and California in the late 19th and early 20th centuries. Ames was born in Vershire, Vermont. He attended the Chelsea Academy and later the Topsfield Academy before enrolling in Dartmouth College. From at least 15 he developed a love of calligraphy and penmanship, paying his tuition at Dartmouth by giving lessons. After graduating in 1857, he returned to Vermont, where he studied law under Stratford Judge 'Cobb'. He later taught writing and penmanship at Eastman's Business College, Oswego. There he also took a degree in bookkeeping. In 1862, he opened his own business school in Syracuse, New York, which he ran until 1868 when it was sold to the B. and S. School. He was admitted to the New York Bar, moving to New York City in 1869. There he briefly practiced law before, in 1873, establishing a penmanship and design business focused on 'engrossing'. Engrossing was a kind of calligraphic script distinguished by clean readable cursive letters that could be writing quickly and easily. Largely due to Ames' efforts, the art of engrossing became prominent in United States business circles from about 1870 to 1910. In 1876, he began publishing the Penman's Art Journal, the leading publication on penmanship for more than 20 years. In addition to publishing Penman, he taught penmanship, testified in court as a handwriting expert, and authored several books on the topic. In addition, and significant to our interests, he issued a number of broadsides distinguished by elaborate typography, calligraphy, and decorative content. In the late 19th century, Ames took Charles Rollinson as an apprentice. When he retired in 1899, Rollinson took over his business. Ames relocated to Mountain View, Santa Clara, California to enjoy his retirement. He died ten years later, in 1909, in San Jose. Learn More...

Good. Repaired tear extending from right margin near 'Surrender of Lee' about 5 inches into the page.