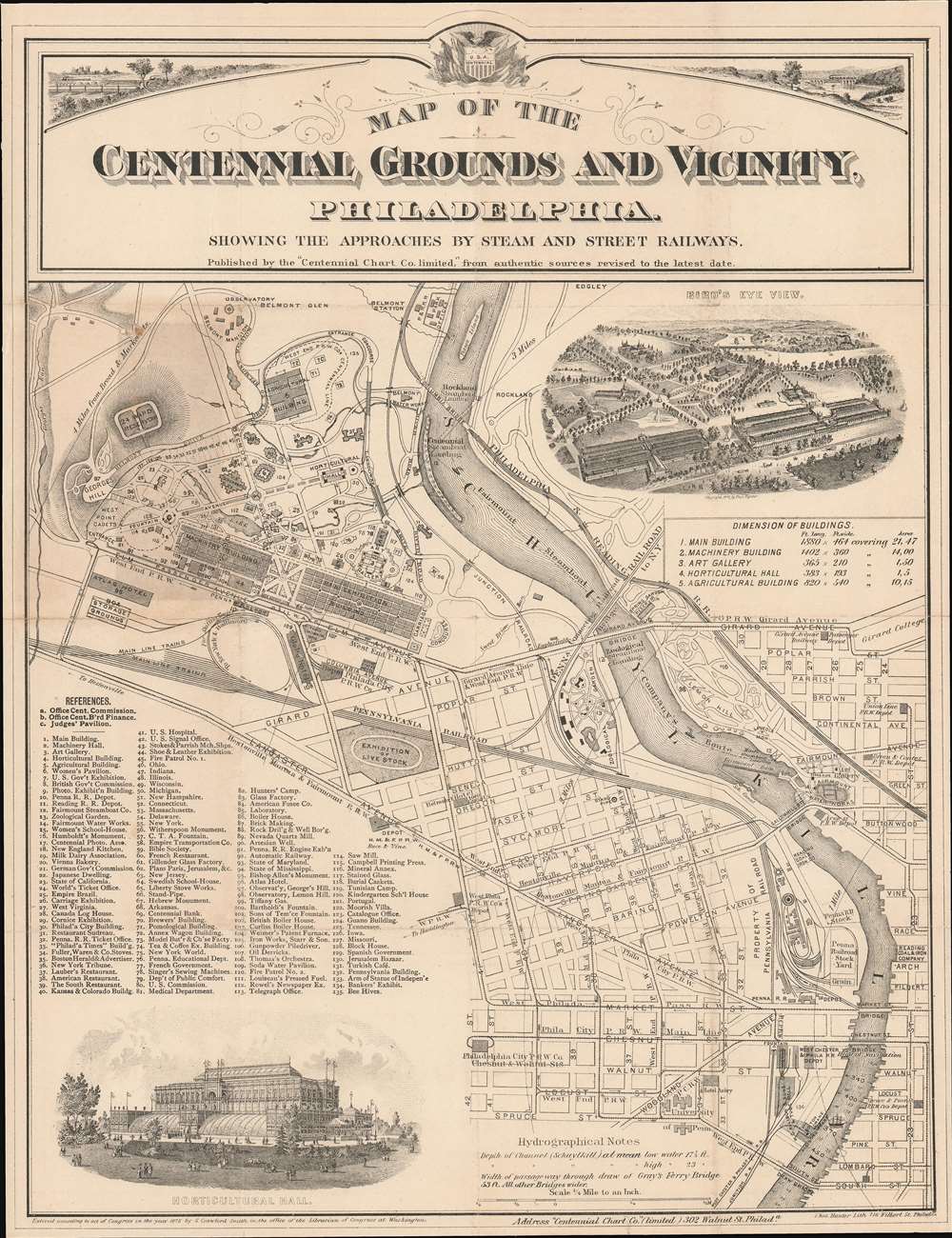 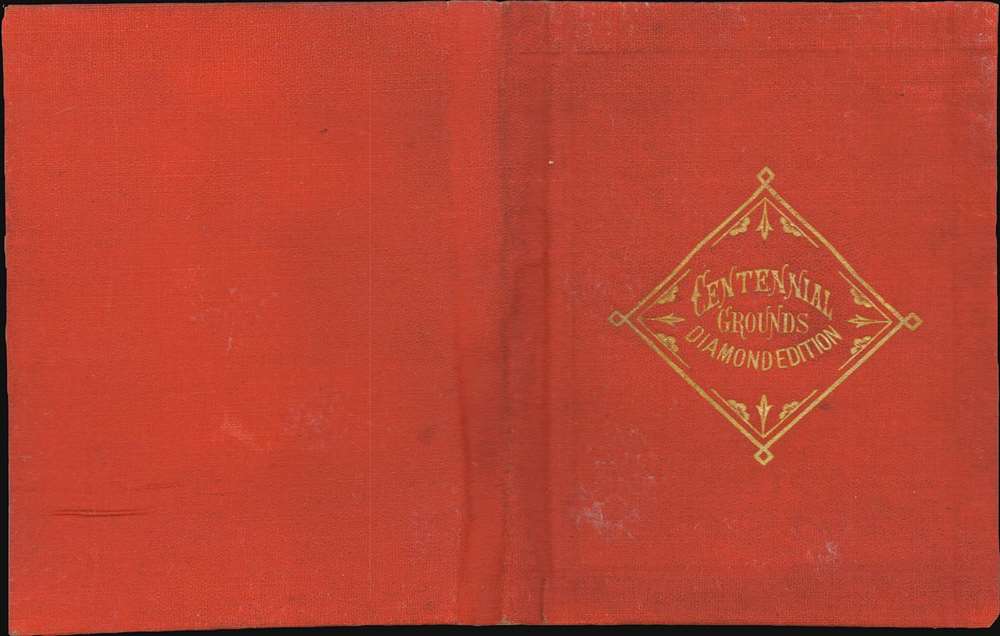 Celebrates the centennial of the signing of the Declaration of Independence.
$500.00

This is an 1875 Samuel Crawford Smith map of the Centennial Exhibition in Philadelphia, Pennsylvania. The Exhibition's main buildings, the Main Exhibition Building, the Machinery Building, Horticultural Hall, the Art Gallery, and the Agricultural Building, are all illustrated and labeled. One hundred thirty-five other buildings across the fairgrounds are numerically labeled and correspond with an index situated in the lower left. Pathways through the fairgrounds are illustrated, some named, including Belmont Avenue, Fountain Avenue, and River Road. Downtown Philadelphia occupies the lower right, with its street grid clearly illustrated. Numerous railroads, such as the Pennsylvania Railroad, traverse the city and serve the fairgrounds. The Schuylkill River cuts a diagonal path through the city and creates the fair's eastern border. A steamboat landing was explicitly built for the Exhibition and directly connected the river and the fairgrounds.

Officially named the International Exhibitions of Arts, Manufactures, and Products of the Soil and Mine, the Centennial Exhibition opened May 10, 1876, and closed on November 10, 1876. Nearly 10 million people attended the Exhibition, including President Ulysses S. Grant and Brazilian Emperor Pedro II, who officially opened the fair. Among the exhibits were the Statue of Liberty's right arm and torch, the John Bull steam locomotive, and the Swedish Cottage, which is now the Swedish Cottage Marionette Theatre in New York City's Central Park.

This map was created by Samuel Crawford Smith, lithographed by Thomas Hunter, and published by the Centennial Chart Company in 1875. Six examples are cataloged in OCLC and are part of the institutional collections at the New York Public Library, the Hagley Museum and Library, Pennsylvania State University, the University of Michigan, the University of Chicago, and the Wisconsin Historical Society.

Samuel Crawford Smith (August 28, 1838 - August 8, 1916) was an American civil engineer and draftsman. Born in Newark, New Jersey to English and Welsh immigrants, Smith served as a captain and then a brevet colonel in the first independent engineering corps of Pennsylvania during the American Civil War. He served with distinction and was stationed on the Potomac with headquarters at Harper's Ferry and on the Monongehela at Grafton and Fairmount. While at Harper's Ferry, just prior to the Battle of Gettysburg, Smith built a pontoon bridge in eight hours that allowed Union General Meade's army to cross the river. He also built and maintained a bridge at Fairmount, Virginia, which protected that city from a Confederate attack. After the war, Smith continued his career in civil engineering and was connected with the Survey Bureau of the City of Philadelphia for thirty years. He also worked as a surveyor for the city of Harrisburg and served as the chief of the Bureau of Statistics of the State of Pennsylvania for a number of years. He also played a prominent role in the early days of railroading in Pennsylvania. In September 1882, Smith was appointed draughtsman in the Department of Internal Affairs in Harrisburg. He also served as Superintendent and Chief Engineer of the Schuylkill Navigation Company for many years. Notably, he lost a contest seeing who could write 'Grand Union Baking Powder. Eight tickets with each pound', after his card was disqualified for being printed instead of handwritten. He managed to fit the sentence on the card 558 times. The contest winner wrote managed to write that sentence on their postcard 271 times. Smith died in Philadelphia on August 8, 1916, of a cerebral hemorrhage. He married Clarinda Boydston, known as Clara, at some point after the American Civil War with whom he had had three sons and a daughter. Learn More...


Thomas Hunter (c. 1827 - December 24, 1898) was an Irish-American lithographer active in Philadelphia from around 1868 until at least 1894. Born in Ireland,\ Hunter immigrated to the United States in 1831 and lived in Philadelphia with his parents and American-born siblings. He appears as a printer in the 1860 census and was working with Stephen C. Duval, son of P.S. Duval, in the firm Duval and Hunter by 1868 or 1869. The firm's reputation grew in prestige. Hunter assumed sole ownership of the lithographic firm in 1874 and in 1876 was named one of the Philadelphia publishers authorized to publish views the 1876 Centennial Exhibition. Over the course of the late 1870s and the early 1880s, Hunter's firm began to accrue incredible amounts of debt. Hunter turned over management of the firm to William H. Butler at some point in the early 1880s, and in January 1886, the establishment suffered a business-ending fire. By that point, Butler had paid off nearly 2/3 of the remaining debt. It is unclear if Thomas Hunter died on December 24, 1898 or not. We have found a death certificate with this date and a correspondingly close birth date in Ancestry.com records, but there is also an entry in the 1900 Census for a Thomas Hunter who was born in Ireland and living as an inmate in an almshouse. Learn More...