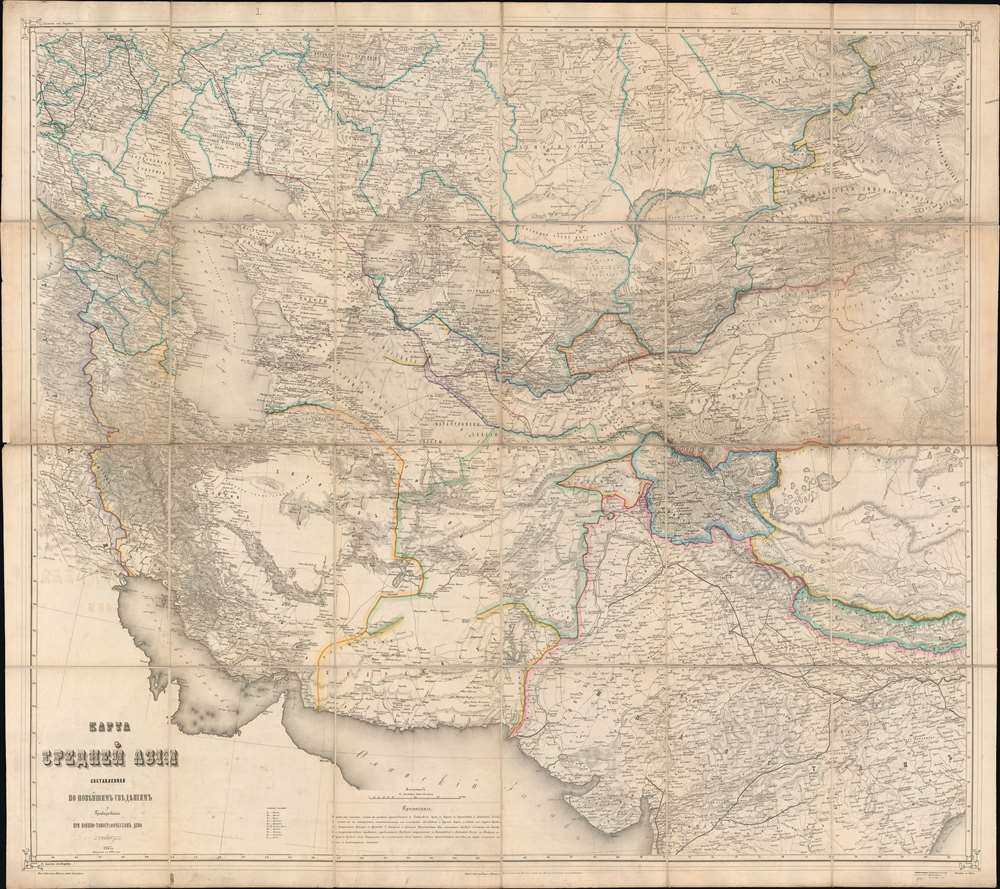 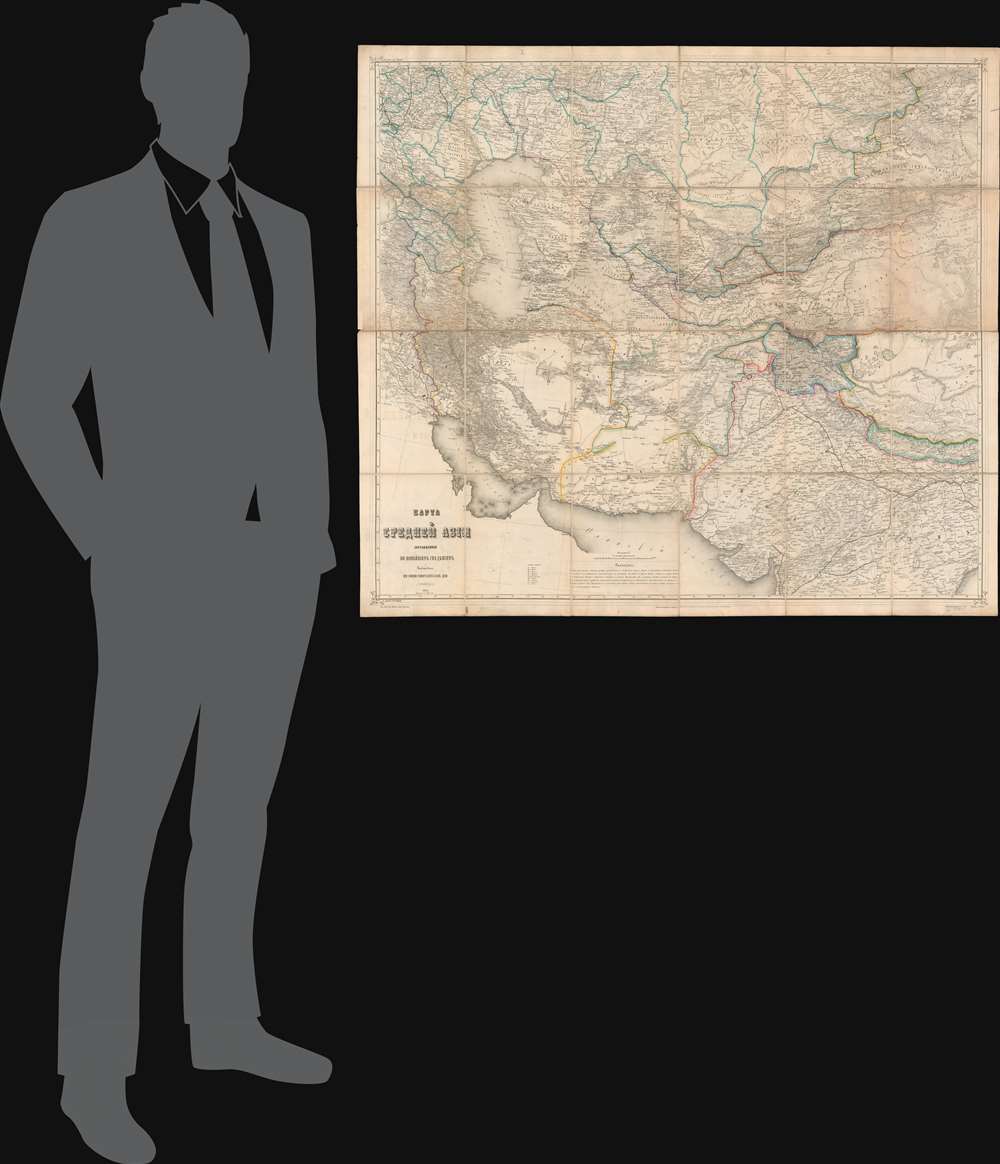 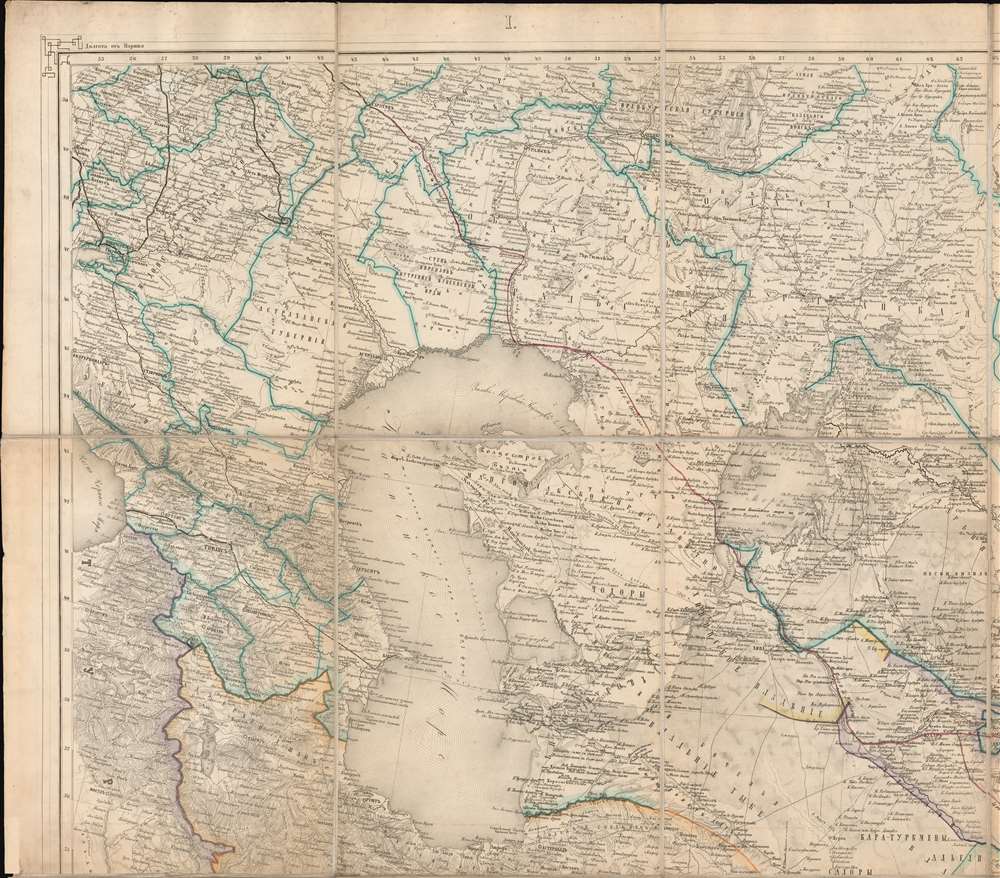 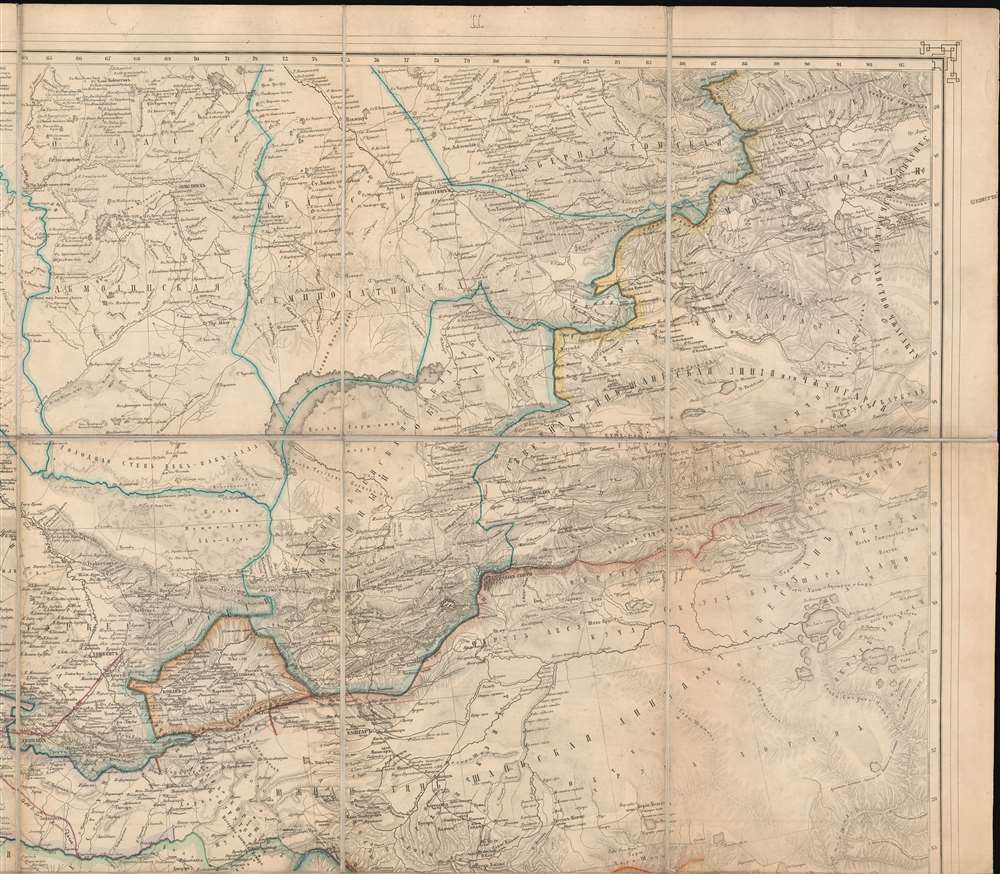 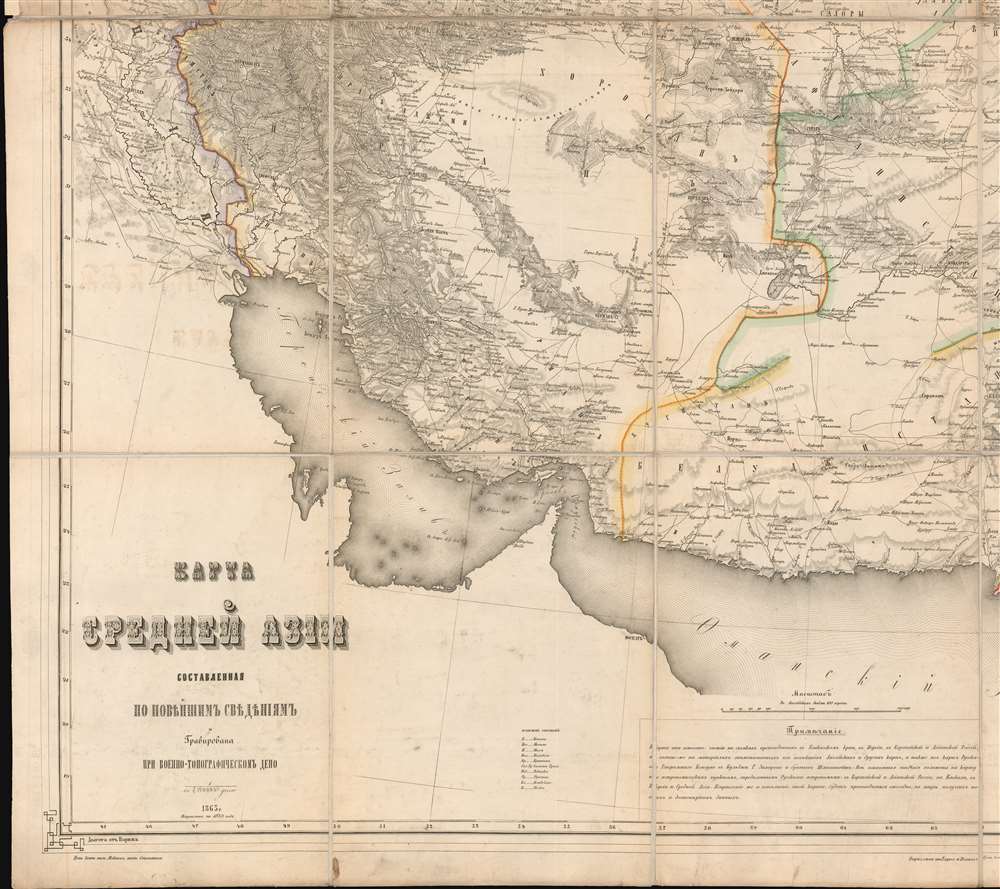 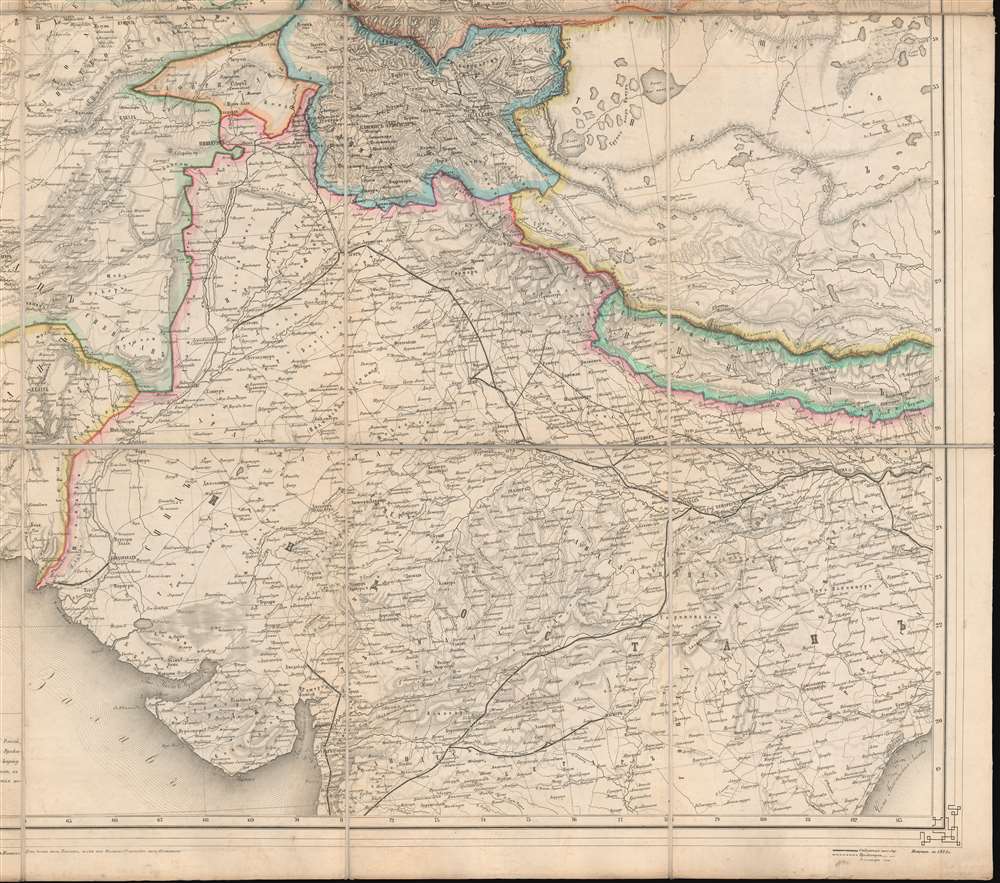 This is an impressive large scale 1873 Russian-language map of central Asia compiled by the Imperial Russian Topographic Depot for the 1873 Invasion of Khiva - with manuscript annotations detailing a British spy's travels. Coverage extends from the Black Sea to Nepal, and the Persian Gulf to the Bay of Bengal. The area covered includes the Caspian and Aral Seas, the Persian Gulf, and the modern-day Central Asian nations of Turkmenistan, Uzbekistan, Iran, Afghanistan, Kazakhstan, Tajikistan, and Kyrgyzstan, as well as parts of Russia, China, and northern India. As such, the map captures the peak of Russian expansionism in Central Asia - highlighting the region that became Russian Turkestan and later Soviet Central Asia.

A Spy's Voyage in Manuscript

The map chronicles a voyage in red and brown manuscript from Saratov (Саратов) to Bukhara, Samarkand, and Tashkent, with a detour to the Amu Darya or Oxus River. Based upon the manuscript notes, which are in English, we can assume that the traveler was a native English-Speaker, but well connected with Russian authorities and likely fluent in Russian. Distances between points are marked in Versts, a now obsolete Russian measurement roughly equivalent to a kilometer.

Our mysterious traveler began his voyage at Saratov, from 1870 the last stop on the Ryazan-Ural Railroad. From Saratov he traveled south, hitting the north shore of the Caspian Sea near Astrakhan before orienting southeast, skirting the western shore of the Aral Sea, from which point he follows the Amu Darya River, bypassing Russian controlled Khiva, striking instead for Bukhara. He moves eastward from Bukhara to Samarkand, taking a southernly detour to the Amu Darya, reaching the river near Termez, at the border with British controlled Afghanistan, before returning to his route and heading east to Samarkand and from thence northeast to Jizzakh and Tashkent.

We have been unable to correlate this journey with any known voyage, but very few English speakers traveled through this region in the 1870s. The voyage marked here somewhat (but not exactly) matches they travels of Eugene Schuyler (1840 - 1890). Schuyler was an American diplomat serving the American legation at Saint Petersburg. He received a special dispensation from Russian authorities to visit newly conquered Central Asia. His 8-month voyage caused a sensation in Europe and America, documenting for the first time a world near-unknown to anyone except Russians, Persians, and the indigenous population. Accounts of Schuyler's travels were published by the National Geographic Society, but he also issued a long confidential report for the U.S. Department of State. The only other major 1870s voyage to this area by an English speaker was undertaken by American New York Herald reporter Januarius Aloysius MacGahan (1844 - 1878), who heard about the invasion of Khiva in St. Petersburg and, evading Russian authorities, crossed the deserts east of the Aral Sea in time to witness the fall of Khiva - during which he was embedded with Russian forces and sanctioned by the Russian General, Kaufmann. While the voyage depicted here is not that of Schuyler or MacGahan, the significance of both voyages underscores just how little known and visited this region was for English speakers.

Instead of a well-publicized and sanctioned voyage like Schuyler's, or intrepid reporting like MacGahan, the travels marked here are of a more clandestine nature, representing British spycraft following the Russian seizure of Khiva in 1873 - which also led to the publication of this map, a major revision and advancement over the 1863 first edition. This explains why the traveler steered clear of Khiva, which would otherwise have been a natural stop. Spycraft also explains the curious detour to the Amu Darya River en route from Bukhara to Samarkand - the traveler was meeting with British agents in Afghanistan to pass on his reconnaissance before continuing on his mission.

The Invasion of Khiva was a power-play in the Great Game that consolidated Russian suzerainty over the entirety of Central Asia north of Persia and Afghanistan (North of the Atrak and Amu Darya/Oxus Rivers). Subjugating Khiva was no minor challenge - Russia met with failure in two prior invasions. The city, located in a desert oasis some 200 miles south of the Aral Sea, had strong natural defenses. To assure troop movements and maintain logistical channels, Russian forces spent 3 years meticulously mapping approaches to Khiva before launching their campaign. When Russia finally invaded, five separate armies marched simultaneously, two from the east, and three from the west, consisting of some 12,000 soldiers in total. The armies converged at Khiva on June 7, 1873 and, after minimal fighting, the city surrendered on June 10. The successful conquest consolidated Russian power north of the Amu Darya or Oxus River. Turkmenistan, located to the south of the Amu Darya, fell 11 years later in 1884, securing Russian hegemony over the Trans-Caspian.

'The Great Game' was a diplomatic confrontation between the British and Russian Empires over Afghanistan and other territories in Central and Southern Asia. The conflict, rooted in long-standing animosity between Russia and Britain, revolved around Afghanistan, which, while lacking significant resources of its own, was strategically situated. For its part, Russia feared Britain making commercial and military inroads into Central Asia, an area long within the sphere of influence of St. Petersburg. Britain, conversely, feared Russia making gains in India, 'the jewel in the crown' of British Asia. The escalating tensions led to several wars and proxy wars: the First Anglo-Afghan War (1839 - 1842), the First Anglo-Sikh War (1845 - 1846), the Second Anglo-Sikh War (1848 - 1849), and the Second Anglo-Afghan War (1878 - 1880), along with the Russian annexations of Khiva, Bukhara, and Kokand. Then as now, Afghanistan proved a grinding stone upon which the world's great empires diminished themselves, none achieving a definitive victory despite committing staggering resources. The Great Game 'ended' on September 10, 1895 with the signing of the Pamir Boundary Commission Protocols, which stabilized the border between Afghanistan and the Russian Empire - but conflict persisted well into the 20th century. British General Frederick William Henry Walshe, c. 1907, wrote of the Central Asians, 'Some will fight for us, some against us, but all will fight.'

This map was first published in 1863 - at the very beginning of the most aggressive period of Russian advancement into Central Asia and the high-point of the Great Game. It was updated again in 1873, to accommodate the intelligence gained through the large and well organized 1873 Invasion of the Khanate of Khiva - this example. A third edition appeared in 1881, following the Second Anglo-Afghan War (1878 - 1880). It was published by the Military Topographic Depot (Военно-топографическом депо). The map was compiled and engraved by the chinovnik (Russian Officials) topographers Мокеев (Mokeev), Tenzin (Тензин). The waters were engraved by Stepanov (Степанов). The lettering by Egorov (Егоров) and Ivanov (Иванов). Cartographically, it is based upon first hand Russian and seized British surveys, as well as fresh reconnaissance. All examples are exceedingly rare and virtually unknown in any collections, public or private.

Russian Military Topographic Depot (Военно-топографическом депо.; January 27, 1812 - October 16, 1863) was an arm of the Russian Imperial Army charged with the organization, production, and publication of cartographic data compiled by the Russian military. The Depot was abolished in 1863, when its functions were transferred to the Military Topographic Section of the Directorate of the General Staff (управления Генерального штаба). Learn More...

Very good. Slight toning due to fold metric.
Looking for a high-resolution scan of this?