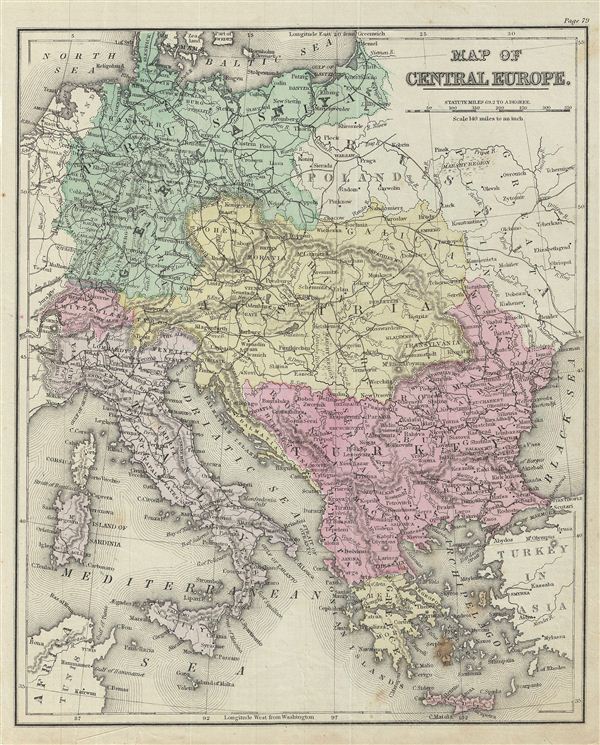 This is an example of David M. Warren's 1879 map of Central europe. It covers from Denmark to the Mediterranean Sea and includes the modern nations of Germany, Switzerland, Italy, Austria, european Turkey and Greece. The Islands of Corsica, Sardinia and Crete are also included.

The Austrian empire, founded in 1804 by the last Holy Roman emperor, Francis II, lasted only till 1866. It was transformed into the Austro-Hungarian empire after Austria was defeated in the Austro-Prussian War of 1866. Meanwhile Greece and the Balkans were witnessing the waning years of Ottoman hegemony in the region, with the Greek Independence movement liberating Peloponnese in 1821. The Ionian Republic, under the protection of Great Britain, was also free of Ottoman control. The other Grecian and Balkan states, including Serbia, Croatia, Moldavia, Wallachia, Albania, and Macedonia, remained at least nominally under Ottoman control until 1878. On March 17, 1861, the Sardinian government led by the Count of Cavour finally declared a united Italian kingdom. Italy would not be fully united until the Franco-Prussia War forced France to abandon its support of the Papal States in 1870.

Throughout, the map identifies various cities, towns, rivers, mountain passes and an assortment of additional topographical details. The map is color coded according to regional and political boundaries with elevation rendered by hachure. Issued as page 79 in the 1879 edition of Warren's Common-School Geography.

Very good. Even overall toning. Text on verso. Verso repair at few places near bottom margin. Some foxing.
Looking for a high-resolution scan of this?