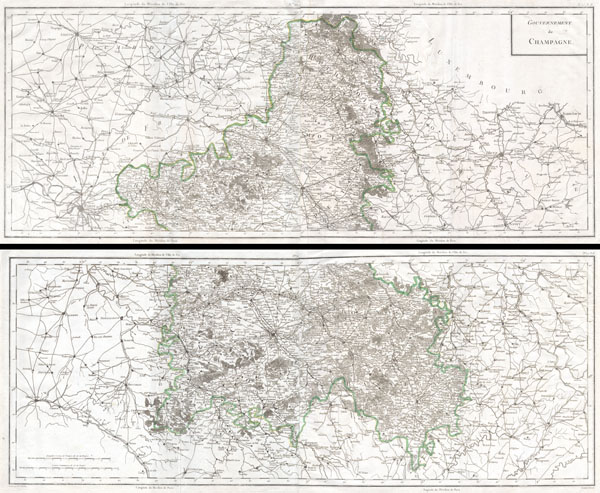 This is a rare and enormous 1797 Tardieu map of the Champagne region of France. Printed during the French Revolution - an 6 de la Republique. Covers from Paris in the west to Sarre-Louis in the east, from Rocroi in the north to Avallon in the south. Includes the full extent of the Champagne district. Printed on four sheets, the northern two of which are joined as a set, as are the southern two. Depicts the region in incredible detail showing roads, canals, rivers, cities, fortresses, villages, chateaux, etc. The region outside of Champagne proper is less detailed, but still offers a wealth of cartographic information and includes the important centers of Paris, Orleans and Beauvais. Champagne is famous around the world for its spectacular sparkling wines of the same name. Historically the province of Champagne was bounded on the north by the bishopric of Liège and by Luxembourg, on the east by Lorraine, on the south by Burgundy, and on the west by Îlele-de-France, and by Picardy. Along with the other original French provinces, Champagne was abolished as a separate entity in 1790. Today this region consists of five départements: Aisne, Aube, Haute-Marne, Marne, and Seine-et-Marne. The towns of Troyes (capital of Champagne), Reims and Épernay are the commercial and government centers. A fabulous decorative piece for perfect for wine store, Champagne wine cellars, and French restaurants. This map was originally prepared for inclusion in Edme Mentelle's (1730-1815) Atlas Universel de Géographie Physique et Politique, Ancienne et Moderne, Présenté a l'Instruction des Écoles Centrales, Pour les classes de Géographie, d'Histoire, et de Législation. Represents plate numbers 35-38.

Very good condition. Original folds. Minor margin repair to the right margin of the top sheet. The sheets that were bound into the book were printed on marginally heavier stock than the joined folding sheets. Else clean and attractive.
Looking for a high-resolution scan of this?