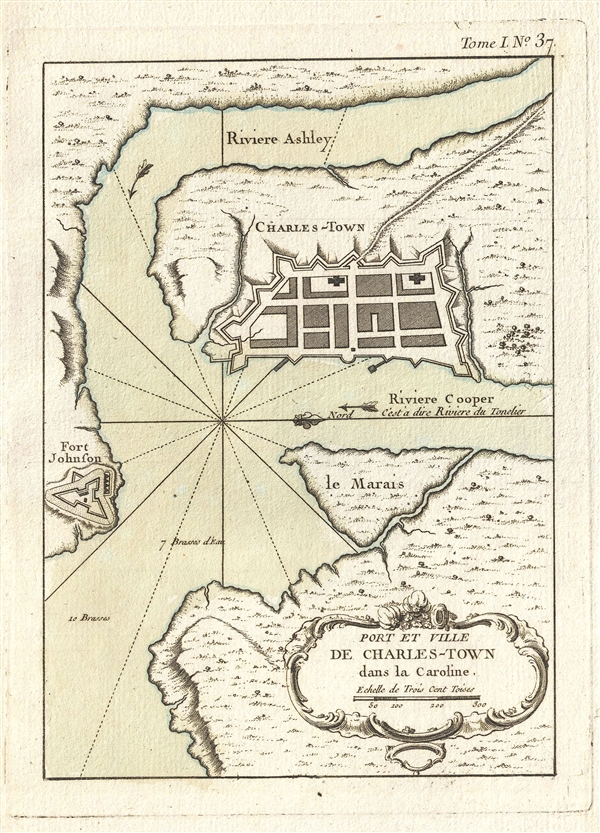 One of the earliest obtainable specific maps of Charleston, South Carolina.

One of the earliest obtainable maps of Charleston, this is Jacques Nicholas Bellin's 1764 Port et Ville de Charles-Town dans la Caroline. Oriented to the west, this fine early map details the convergence of the Cooper and Ashley Rivers. The town of Charleston is clearly laid down on the west bank of the Cooper River. Charleston's design follows the fortifications as designed by William De Brahm. Often called 'De Braham's Folly' the fortifications, of which only a few are illustrated here, were audaciously sophisticated and, had they been enacted would have transformed the peninsula of Charleston into the most sophisticated military enceinte in British North America. As it happened fortifications were only partially completed between 1755 and 1757. Across the Ashley River we can see Fort Johnson. Across the Cooper River Bellin identifies Le Marais, what is today Hog Island. This map was issued to accompany the 1764 edition of Bellin's Petit Atlas Maritime.