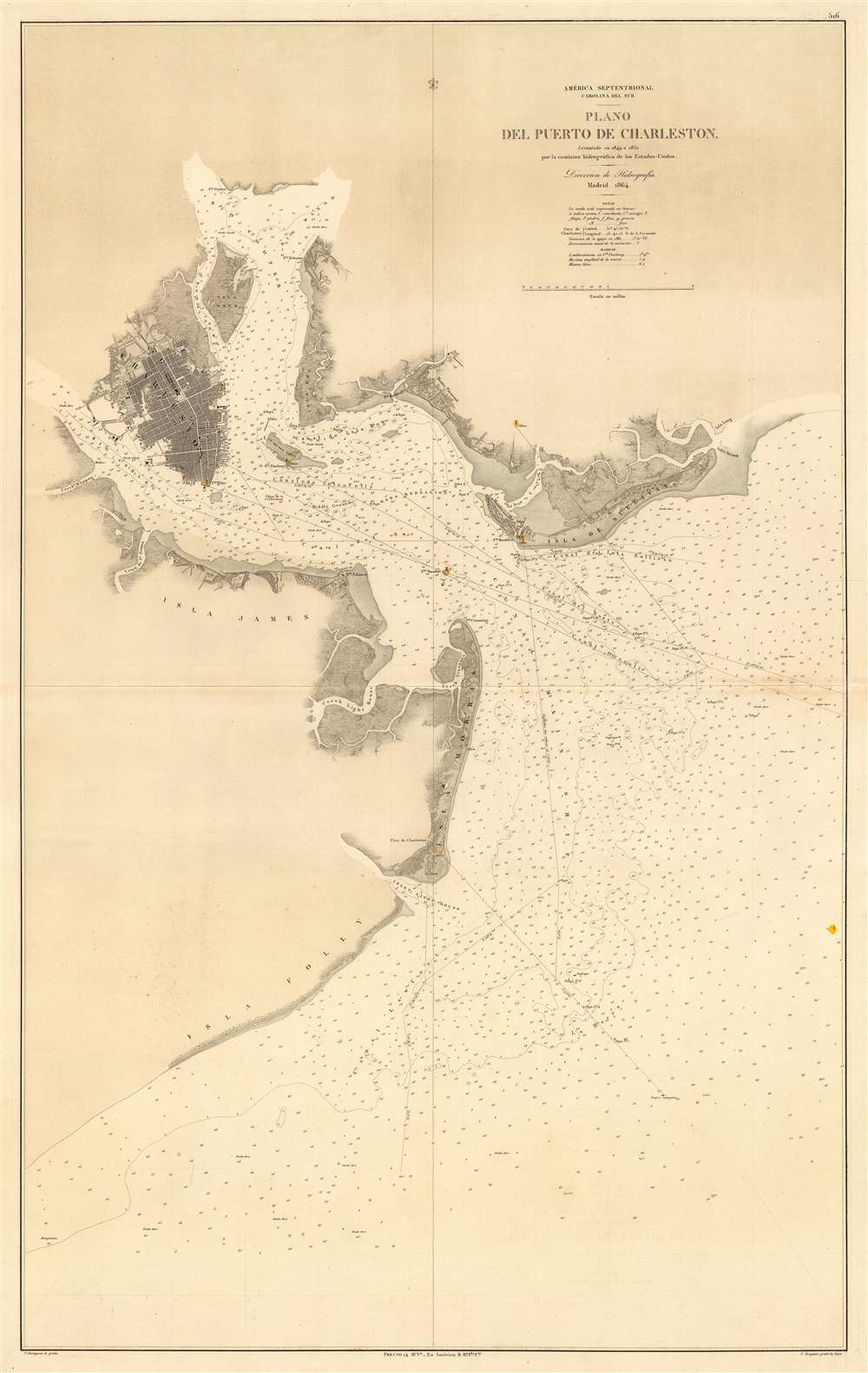 Issued during the American Civil War for Spanish Blockade Runners!

An utterly stunning 1864 Civil War Era Spanish Direccion de Hidrografia nautical chart or maritime map of Charleston Harbor, South Carolina. Probably issued for use by Spanish blockade runners during the American Civil War. The map covers the South Carolina coast from Sullivan Island to Folly Island, with a focus on Charleston Harbor. Charleston itself is beautiful engraved and situated between the Ashley and Cooper Rivers. The street grid is detailed, including piers, parks, individual buildings, and more. Similar attention has been given to the Charleston Harbor town of Mount Pleasant and Moultrieville, both of which have since been folded into greater Charleston.

Spain and the Confederacy

After a period of decline in the early 19th century, Spain entered a period of relative political stability and sustained economic growth leading to a strengthening of its naval and military forces. Indeed, under Leopoldo O'Donnell, Spain's navy grew so fast that by 1860, it was the 4th largest naval power in the world. Spain was well positioned to reassert its colonial power, especially with the United States distracted by the American Civil War.

When the American Civil War broke out in 1862, Spain and the Confederacy were natural allies. Moreover, like the Confederacy, Spain was he only European country that continued to support slavery in its Puerto Rician and Cuban plantations. Nonetheless, Spain refused to officially sanction the Confederacy, instead signing a declaration of neutrality in 1861.

Nonetheless, Spain had its eye on the Confederacy. While the government sanctioned no official aid to the Confederacy, enterprising Spanish merchants and ship owners were not discouraged from running the Union naval blockades to supply the south. This chart was part of a collection of maps issued in 1864 detailing Confederate ports and coastlines, doubtless issued due to increased Spanish interest in trade with the South.

The chart is derived from U.S. Coast survey work completed between 1849 and 1852, but has here been resized and fully re-engraved exhibiting a superior level of workmanship. The map was engraved by Pedro Hortigosa (1811-1870) and the lettering by F. Bregante. The appears to have been only one edition, suggesting that the subsequent defeat of the Confederacy in 1865, and the destabilization of Spain in the same year, eliminated the demand for updates.

This chart is scarce and does not appear in the OCLC. There are only a couple of records of it being offered on the private market.


Pedro Hortigosa (1811 - 1870) was a Spanish artist, professor, and engraver active in Spain during the middle part of the 19th century. Hortigosa was born in Segovia, Spain. He initially studied painting under the Spanish neoclassical painter Vicente Lopez Portaña (1772 - 1850). He also attended the Real Academia de Bellas Artes de San Fernando (Royal Academy of Fine Arts of San Fernando). He was recognized with awards in 1832, and in 1855, became professor at the Escuela de Bellas Artes de Sevilla (Good of Fine Arts of Seville). There he developed an interest in printmaking and possibly traveled to France to study the latest techniques. He seems to have worked on a commission basis for the Direccion de Hidrografia, engraving nautical charts as early as the 1840s and as late as the 1870s. He died in Madrid. Learn More...