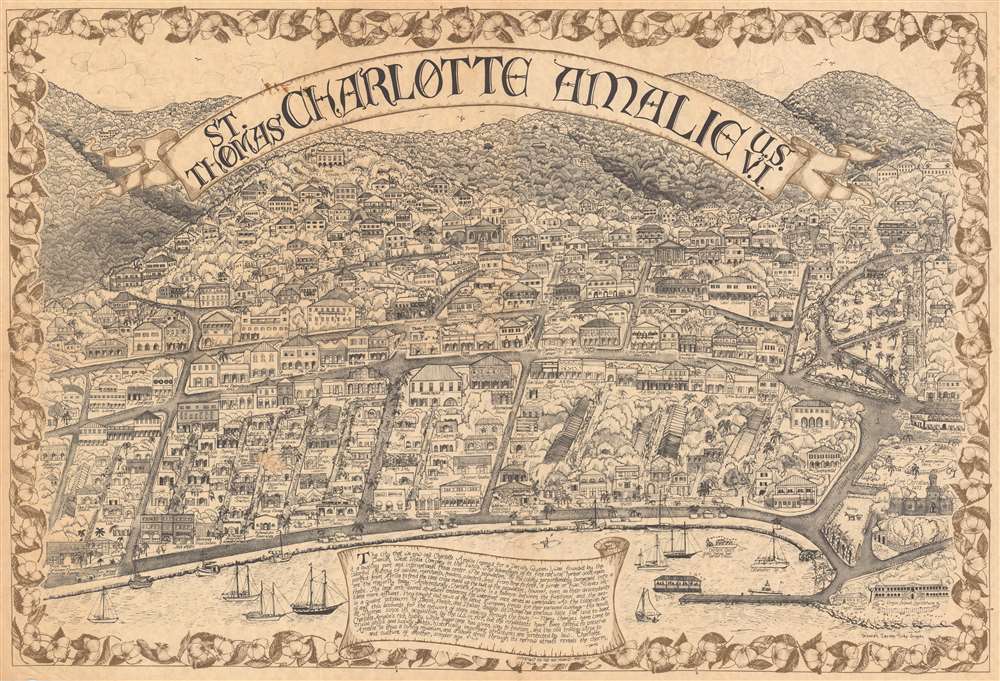 This is a rare c. 1970 Deborah Jacobs and Judy Grogan pictorial map of Charlotte Amalie on the island of St. Thomas, U.S. Virgin Islands. Focusing on part of Charlotte Amalie, the map includes depictions of several famous sites, including Fort Christian, the Virgin Islands Legislature, the Emancipation Garden (labeled on the map as Emancipation Park), and the 99 steps. Hotel 1829, situated just to the left of the 99 steps, remains in operation today. Among local mainstays from years past are Sparky's Waterfront Saloon, the Joe Vogel Diving Company, The Cuckoo's Nest, and the Crazy Cow.

Today Charlotte Amalie is the largest city and capital of the U.S. Virgin Islands. The town can trace its unusual name to 1691, when the original settlement 'Taphus' (Beer Hall), was renamed to honor Charlotte Amalie of Hesse-Kassel (1650–1714), queen consort to King Christian V of Denmark-Norway. Charlotte Amalie was chartered by Danish West India Company and is one of the few lasting Danish colonies in the Caribbean. From 1764 it was an open free port with permissive value - attracting pirates like Blackbeard and 'supposedly' Bluebeard, who visited the port for recreation between raiding. The island boasts a wealth of unique Danish colonial architecture, making it a popular cruise stop on the Caribbean circuit.

This map was created by Deborah Jacobs and Judy Grogan and copyrighted by the Ten Pound Map Company on St. Thomas. We have identified no other examples.

Ten Pound Map Company (fl. c. 1970 - 1981) was a novelty publisher of pictorial maps and views active in the latter 20th century. We are aware of only two works by the elusive firm, a view of Charlotte Amalie, St. Thomas, and a view of Lake Placid, New York. They were based in St. Thomas, U.S. Virgin Islands. Learn More...