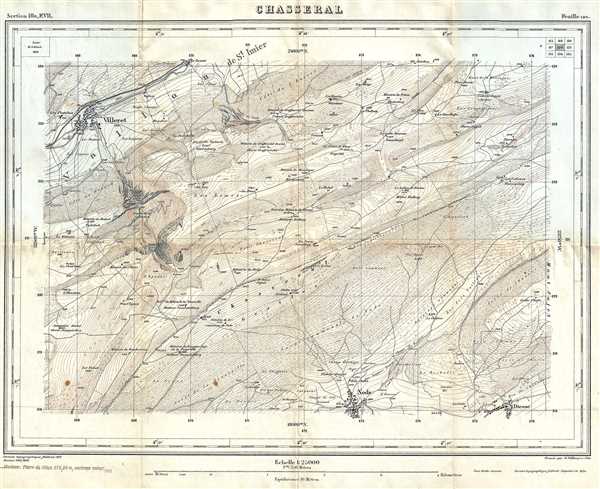 An outstanding example from the second official atlas of Switzerland.
$100.00

This is a 1924 Siegfried Atlas map of the Chasseral region of Switzerland. This map shows the region of Switzerland around the Chasseral, a mountain in the Swiss Jura range. This mountain is the fourth highest in the Swiss Jura at 5,269 feet in altitude. This summit offers incredible views of the Swiss plateau, the Alps (including Mont Blanc), the Jura mountains, parts of France, and the Black Forest. The towns of Villeret and Nods are shown on the map. The map has very precise topography (shown in brown), blue rivers, and the rest of the map is black.

This map was part of the Atlas Topographique de la Suisse, also known as the 'Siegfried Atlas,' the second atlas to be published that exclusively printed with maps of Switzerland. The first atlas, the Dufour Atlas, published maps that were monochrome and had a scale of 1 : 100000. The 'Siegfried Atlas' published maps in three colors, and with either a 1 : 25000 or 1 : 50000 scale, making these maps much more precise.