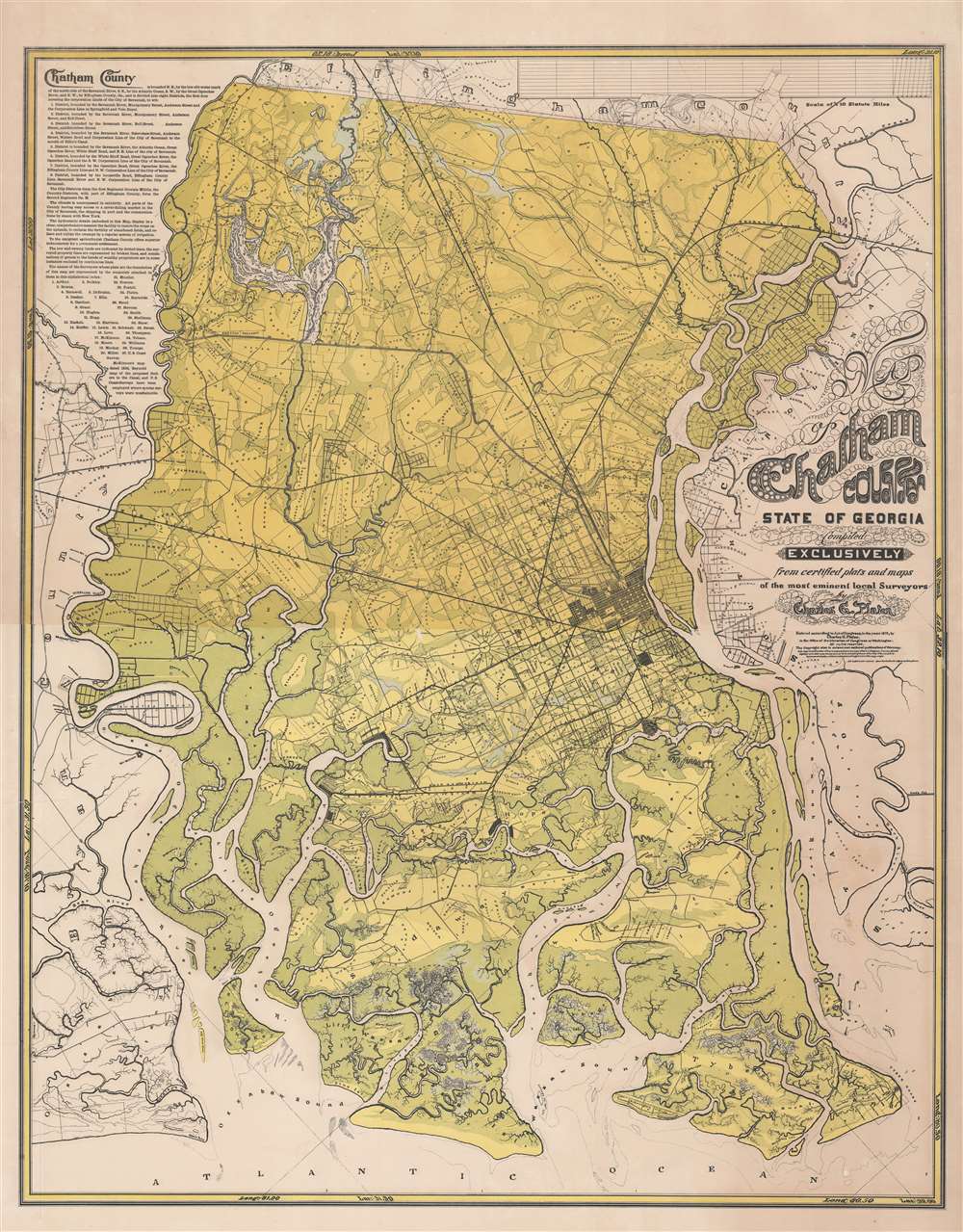 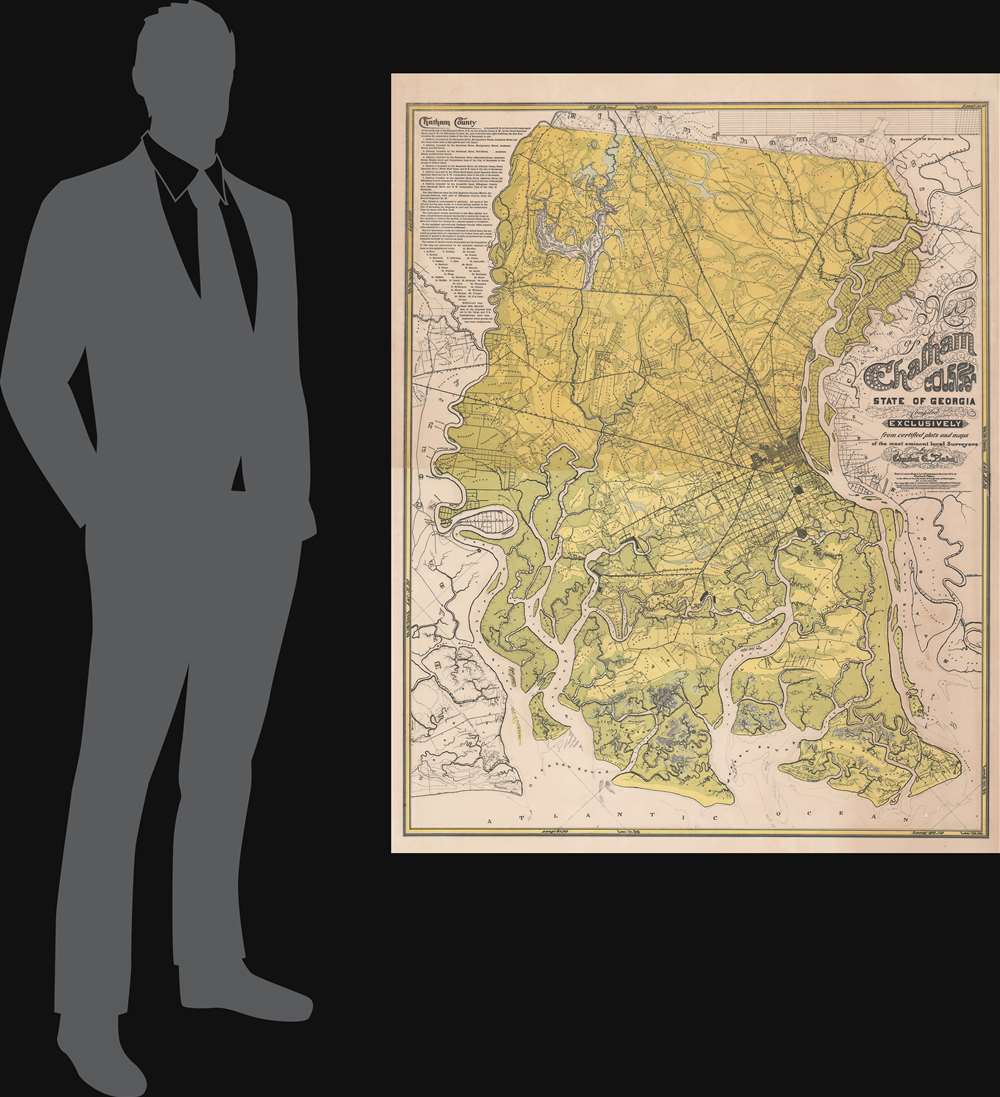 A striking 1875 Reconstruction Era map of Chatham County, Georgia, illustrating in large the vicinity of Savannah. This map was published by Charles G. Platen, who incorporated local survey work, the 1818 John McKinnon map, and the meticulous work of the U.S. Coast Survey to compile this, the largest and most detailed map of the Savannah area ever issued. The intent behind the map, to develop agricultural lands, is evident in the color coding, with green referencing lowlands, swamps, and other wetlands, blue representing water, and yellow arable land. Platen advances the map considerably by drawing on the work of 36 local surveyors, all of which are named, to add property lots and owners throughout.

The map was advertised in the December 29, 1876 Savanah Morning News, where it was given a glowing review…

The map has been prepared from original surveys and deeds, and from private maps and engineers’ profiles for various public and private works. Besides the years of labor in the compilation and drawing Mr. Platen spent seven months in Philadelphia superintending every detail of the lithographing, and the work shows that his time was not spent in vain, as it is without doubt the handsomest lithographic map ever printed in America. The map in every respect is well worthy of inspection, and we invite the public to call at the counting room of the NEWS office and examine the county in which they live, which is so clearly and accurately delineated. It is 43 x 56 inches, and every district, village and plantation is plainly and distinctly defined. As a work of art it is a magnificent specimen, and as an accurate and complete map of this county, its equal has never been seen, and its value cannot be overestimated.

Of course, reading this magnificent promotion, one must wonder how much of it was penned by Platen himself?

A Map that Remains Relevant

Due to its size and detail, this map remains relevant. It has been consulted in boundary disputes between the States of Georgia and South Carolina, and is a go-to research item for historical and archaeological studies. It was consulted to determine the age of a plank road that parallels present-day Highway 80, and to locate the exact site of the Ten Broeck Race Course, where the largest slave auction in Georgia history took place in 1859.

This map was drawn and prepared by Charles G. Platen in Savannah. It was engraved and printed by an unknown firm in Philadelphia, Pennsylvania - then a hub of printing. Today it is very scarce. World Cat/OCLC list four examples: Cornell, Library of Congress, Georgia Southern, and the University of Alabama. We have located additional copies at the Georgia Historical Society and the Office of the Surveyor-General Department, State of Georgia. At least two others are known in private hands.

Charles G. Platen (1818 - 1884) was a German-born Savannah Georgia based architect, lawyer, 'daguerrian artist,' possibly a hatmaker, and map publisher active in the second half of the 19th century. Platen was born in Brunswick, Germany. Evidence suggest his birth name was Moritz Karl Gottfried Von Platen. He may have shortened it to Charles when he emigrated to the United States in 1848, Forty-Eighter fleeing the Revolutions of 1848. He landed in New Orleans in November of that year. Between his arrival and September of 1859, when he settled in Savannah, Georgia, Platen appears to have moved around a bit, settling briefly in Buffalo, New York and later in Charleston, South Carolina, where he worked as a daguerreotype artist. During the American Civil War (1861 - 1865), where he served in the Olmstead's 1st Regiment, Georgia Infantry, and was posted on Sullivan's Island, South Carolina. He declared his intent to become naturalized U.S. Citizen on December 18, 1871. He appears in Savannah directories, where he is listed as an 'architect and lawyer' until 1884. He had at least one child, Hugo Platen (1859 - 1925), who was born in Charleston, in 1859. The 1860 census also records a Pauline Platen (1838 - 18??), born in Hamburg. If our association of Charles G. Platen with Moritz Karl Gottfried Von Platen is correct, this is his much younger wife Pauline Ernestine Friederike Von Platen. In March of 1884, Platen received his naturalization papers. His signature on these documents represent an extremely weak and shaky hand, suggesting infirmity. There is no evidence of Platen after 1884, but there is some suggestion that he may have returned to Germany to visit or live in that year, and may have died there. Learn More...