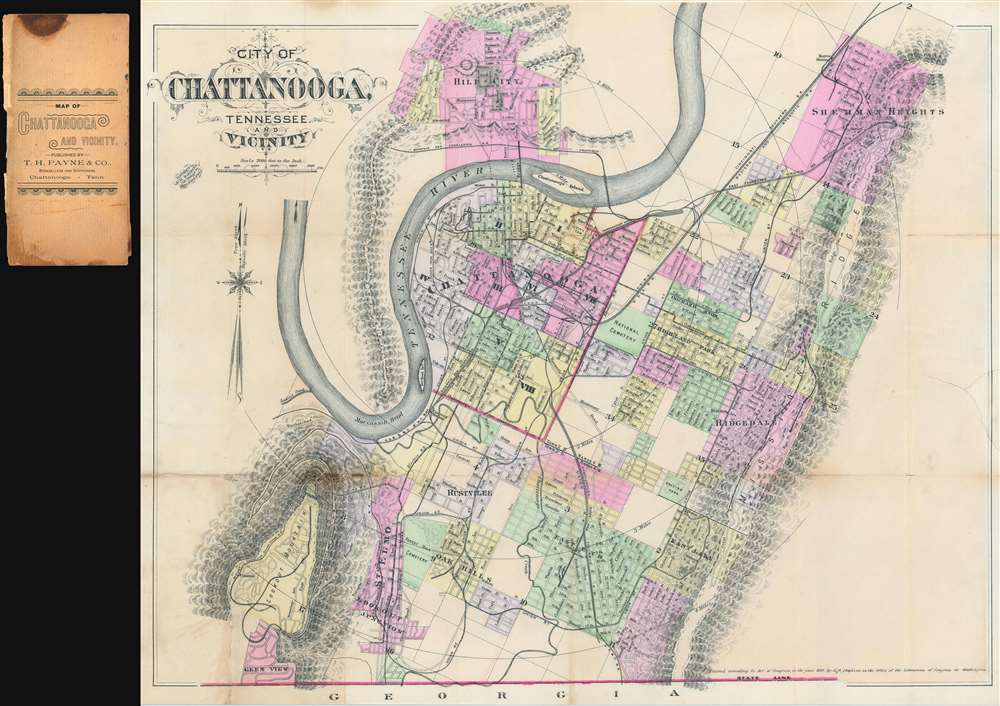 A detailed and rare city map of Chattanooga.

This is an uncommon 1889 G.M. Hopkins city plan or map of Chattanooga, Tennessee. The map depicts the city from Lookout Mountain to Sherman Heights and from Hill City to Georgia, and the Tennessee River meanders its way across the sheet, with Chattanooga situated in one of its bends. City wards in Chattanooga are color coded to allow for easy differentiation and numerous streets are labeled, although the only building identified is the Hamilton County Court House. Chattanooga's many railroad lines are illustrated and labeled, including the electric railroad and the Mount Lookout Narrow Gauge Railroad. The city's topography is illustrated and both Mississippi Ridge and Stringer's Ridge are labeled.

This map was created by G.M. Hopkins and published by T.H. Payne and Company in 1889. Separately published maps of Chattanooga in the 19th century are rare in general, and this map is no exception. Three examples are catalogued in the OCLC and are part of the institutional collections at the University of Tennessee, the Tennessee State Library and Archives, and the Wisconsin Historical Society.

G. M. Hopkins Company (1865 - 1940; 1943 - today) was an American civil engineering and surveying firm based in Philadelphia. Founded in Philadelphia in 1865 by brothers G. Morgan and Henry Hopkins as G.M. Hopkins and Company, the firm focused primarily on real estate plat maps of the Eastern seaboard. It is unknown exactly who G.M. Hopkins was. The 'G.M.' either stands for Griffith Morgan or George Morgan. Three possibilities exist for this happenstance: it is possible that the compilers of early Philadelphia directories were negligent, G.M. Hopkins changed his first name, or two G.M. Hopkins worked for the firm. The firm published 175 plat maps atlases depicting cities, counties, and townships in eighteen states and the District of Columbia, and were among the first to create a cadastral atlas. Henry Hopkins supervised much of the surveying work and was credited with creating two maps in 1860 and 1861. He also served as the chief assistant. G.M. retired in 1900 (and died the following year), which allowed Henry to take control of the business which he renamed the G.M. Hopkins Company in 1902. Henry retired in 1902 and sold the business to George B.C. Thomas, who had been working for the firm since 1896 as an engraver. Henry Hopkins died in 1921. The G.M. Hopkins Company was purchased by the Franklin Survey Company of Philadelphia in 1943 and continued publishing atlases using the Hopkins imprint. In 1986 the company was renamed Franklin Maps and is still in operation today. Learn More...


T.H. Payne and Company (1865 - 1998) was a stationery and bookseller in Chattanooga, Tennessee. Founded in 1865 by Thomas H. Payne (1842 - 1924) and Zeboin C. Patten, as Patten and Payne, the store started in a small six foot space but soon began to grow and eventually thrive. Payne became sole owner in 1875, renamed the business T.H. Payne and Company, and continued to grow his business. The Payne family operated the store until 1996 when U.S. Office Products purchased it. Learn More...

Good. Map exhibits even toning and has been laid down on archival tissue. Exhibits some staining where originally attached to binder and along original fold lines. Partial fill repair to right border area.