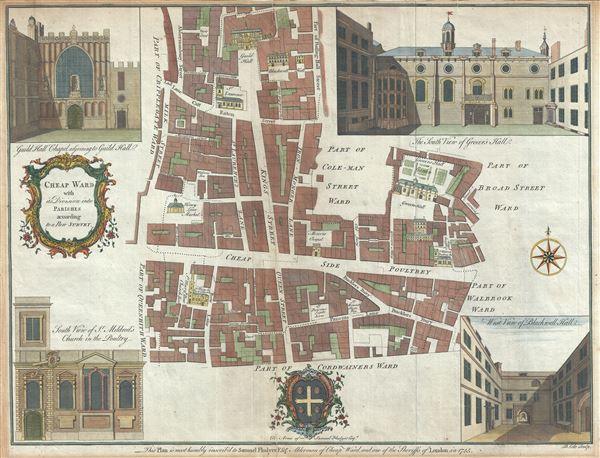 This is a beautiful map of the Cheap Ward in London, England by Benjamin Cole. The map covers Cheap (from the Old English word meaning 'market') Ward in the City of London from Milk Street east to Prince's Street and from Guildhall south as far as Queen Victoria Street. Cole identifies various important buildings in profile, many of which still exist, including Guildhall, Blackwell Hall, St. Mary le Bow Church, Mercers Chapel, etc. Guildhall, build in 1440, is the only non-Church building that has survived to this day. Once used a town hall, it is still an administrative and ceremonial center on London.

Four illustrated views are included in each quadrant. The top left quadrant features the Guild Hall Chapel adjoining to Guild Hall, the top right quadrant features the South View of Grocer's Hall, the lower right quadrant features the West view of Blackwell Hall and the lower left quadrant includes the South view of St. Mildred's Church in the Poultry. A decorative title cartouche adorns the left of the map while coat of arms of Samuel Fludyer Esqr., to whom this map is dedicated to, appears along the bottom margin with the inscription 'This Plan is most humbly inscribed to Samuel Fludyer Esqr. Alderman of Cheap Ward and one of the Sheriffs of London in 1755.'

This map was derived from earlier plans by John Strype with the illustrations based on West and Tow's 1736 Prospect Views of Ancient Churches. This map was created by Benjamin Cole and issued as part of William Maitland's History of London from its Foundation to the Present Time.

Maitland, W., History of London from its Foundation to the Present Time, 1756.

Very good. Minor wear and verso repair along original fold lines. Minor toning and spotting at places. Original platemark visible. Some toning along margins.
Looking for a high-resolution scan of this?