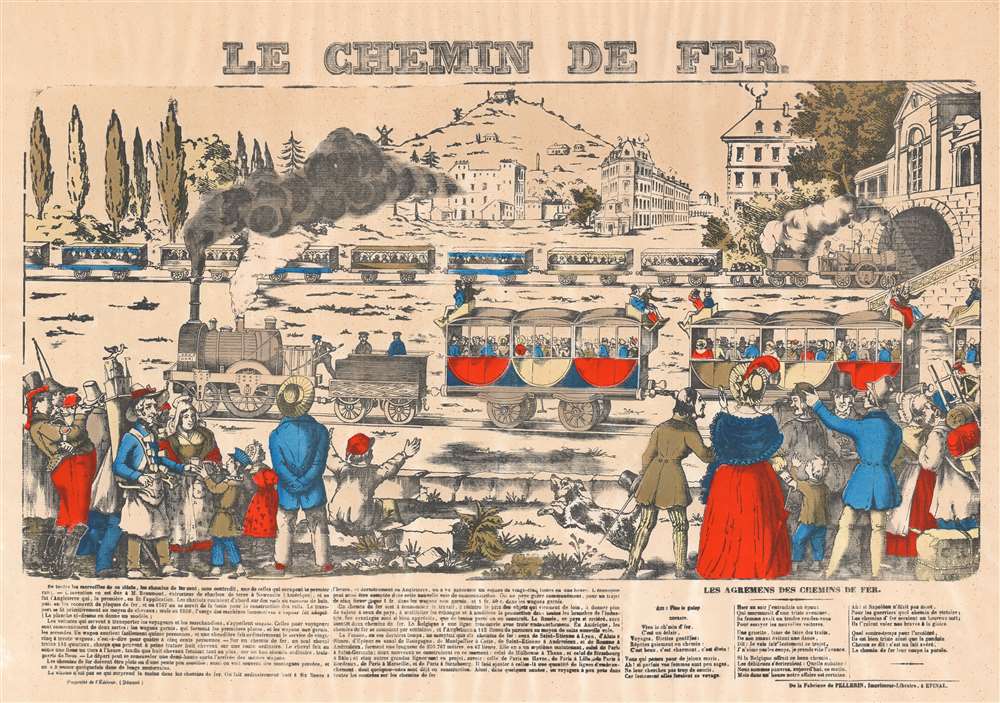 Created to celebrate the first dedicated passenger train in France, this c. 1840 Imagerie Pellerin broadside is a view and map of the rail line between Paris and St.-Germain, the first rail line in the Île de France. Opened August 24, 1837, a completed journey along the just under 12-mile-long route took only twenty-eight minutes. The royal family, including Queen Marie- Amélie attended, although King Louis-Philippe was notably absent. The French government had been concerned about the 'risks' involved and dissuaded him from participating. It opened to the public on August 26. The opening was a major social event in Paris; over 18,000 Parisians rode on the first day. Travelers and newspapers announced the accomplishment with fanfare, stating that the day before getting to St.-Germain would have been 'a trip', whereas the day the rail line opened it was no more difficult than 'leaving your house'. Put another way, before the advent of the rail line, a trip to St.-Germain from the Tuileries by horse-drawn coach would have taken five or six hours.

This broadside was created and published by the Imagerie Pellerin, c. 1840. Examples are part of the collections at the Columbus Museum of Art in Columbus, Ohio; the Archives départmentales des Vosges in Épinal, France; and the Bibliothèque nationale de Paris in Paris, France. It is rare on the private market.

Jean-Charles Pellerin (1756 - 1836) was a French illustrator, artist, and printer. Born in Epinal, France, Pellerin expanded on his fathers business and founded Imagerie Pellerin, also known as the Imagerie Epinal, in 1796. Until 1810, the Imagerie Pellerin published religious images and card games. Little by litte the firm began publishing scenes of Napoleonic War battles or portaits of Napoleon. This trend of printing political imagery continued through the Restoration and the July Monarchy. Nicolas Pellerin (Jean-Charles's son) and his brother-in-law Pierre-Germain Vadet took over the firm in 1822 and moved away from publishing cards. They began publishing images almost exclusively. They also took advantage of innovations in printing techniques and used xylography, lithography, and, beginning around 1854 - 1855, chromolithography. Georges Pellerin (Charles's son) took over the business in 1888 following his father's death, along with his stepbrother Pol Payonne. This change in leadership led the firm to begin publishing material geared toward children, some of which met with some controversy. Some of these works, many of which were scientific in nature, were marketed to schools, but teachers were not enthusiastic about them. This lack of enthusiasm caused these materials to sell poorly. During both the Franco-Prussian War and World War I, the Imagerie Pellerin published pro-French propaganda. Georges Pellerin died after World War I, and with his death the firm became known as l'Imagerie Pellerin SA. With a break in operations during World War II, the Imagerie Pellerin continues to operate in Epinal to this day. Learn More...