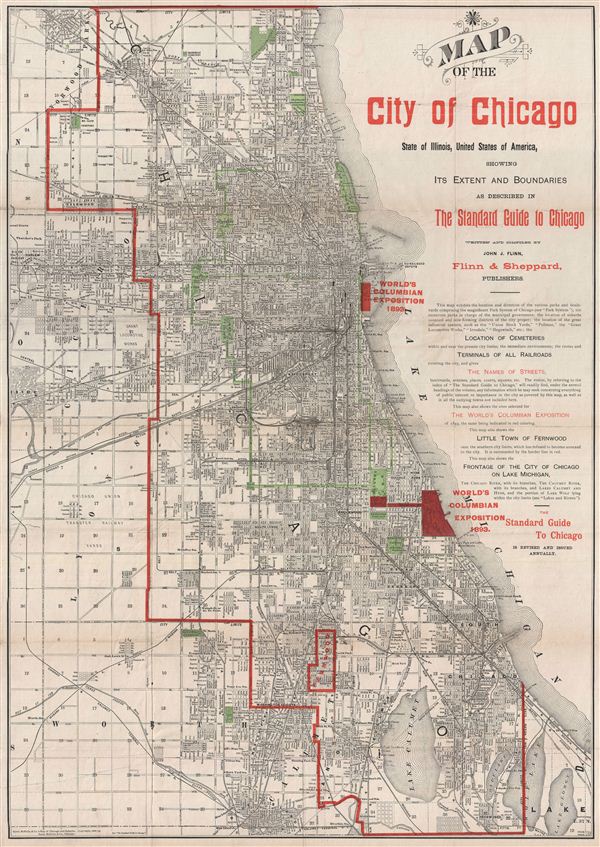 A fine decorative map of Chicago issued in 1890 for issue in various editions of the Standard Guide to Chicago. This excellent map covers Chicago from Church Road in the north to Wolf Lane in the south, and from the suburbs of Cicero and Lyons eastward to Lake Michigan. Selected as a railway hub for most of the American Midwest, Chicago was undergoing a boom period and would soon draw the world's attention as the site for the 1893 Chicago World's Fair, or as it is better known the Columbian exposition. The map identifies two competing locations for the fair, Jackson Park, which was ultimately selected, and further north, an undeveloped pier area near the Illinois Central Railroad Docks. The map also illustrates the Chicago Park System. The 'Park System,' designed by Olmsted prodigy William Le Baron Jenny in 1871, refers to a network of parks and garden boulevards intended to embrace the city in arms of foliage. Many of these parks and boulevards remain today. The municipality of Fernwood, at the time an upscale community, is here notably separate from Chicago - it was the last village to be annexed into greater Chicago in 1891, one year after this map was issued. Though this map was issued in all editions of the Standard Guide, it was not updated along with the guide and exists in only one edition.

Very good condition. Minor wear on originally fold lines. Professionally flattened and backed with archival tissue.
Looking for a high-resolution scan of this?