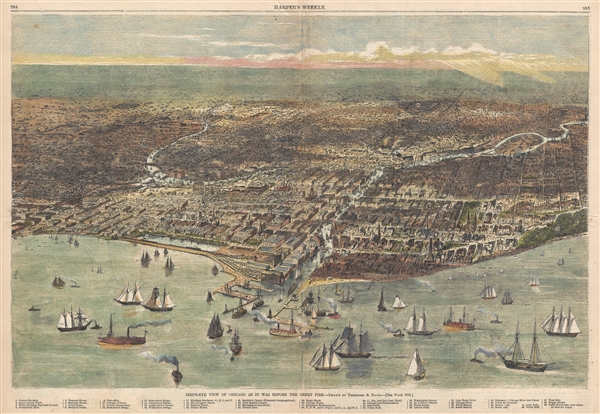 Uncommon Bird's-Eye View of Chicago just before the Great Fire.

An attractive example of Theodore R. Davis' 1871 view of Chicago as it appeared before the Great Chicago fire of October 10, 1871. This view was drawn about 10 days after the fire for publication in October 21, 1871 issue of Harper's Weekly. The view presents Chicago as seen from somewhere high above Lake Michigan looking westward towards the Chicago River, port, and the central business district (The Loop). Some 49 locations are identified numerically and named at the bottom of the map. Given the perspective and detail it is most likely that this view was prepped from a balloon sometime during the summer predating the fire.


Theodore R. Davis (July 22, 1841 – November 10, 1894) was an American artist-correspondent and illustrator active in the later part of the 19th century. Much of his work was prepared for and published by Harper's Weekly. Davis is best known for his many drawings of important military and political events during the American Civil War, in which he was twice wounded. Although a northerner, throughout the war he traveled incognito throughout the Southern States in the party of the London Times correspondent, Britisher, William H. Russell. After the war Davis continued to work for Harper's covering the Reconstruction and the Westward Expansion. He was the first to document the Sioux Indians in 1865, observed General Custer during the Indian Wars in 1867-68, and traveled with Winfield Scott Hancock’s failed Indian Peace Expedition. In retirement he wrote a treatise titled, "How a Battle is Sketched." His remains are interred at Hazelwood Cemetery, Rahway, New Jersey. Learn More...