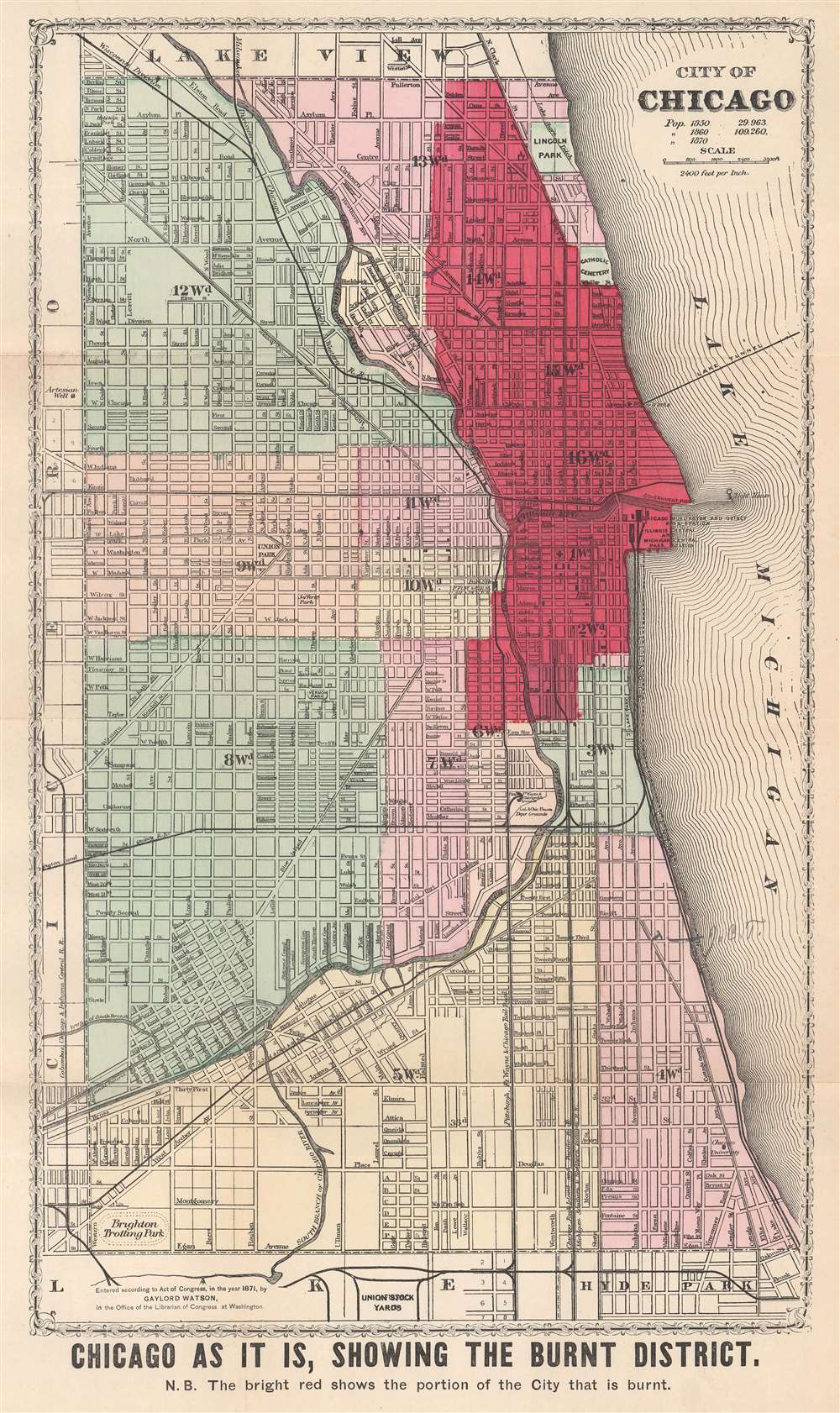 Chicago after the Great Chicago Fire.

This is an 1871 Gaylord Watson city plan or map of Chicago, Illinois, highlighting the area burned by the Great Chicago Fire. Dark red emphasizes the over three square miles burned by the fire and a nota bene below the bottom border reinforces this fact. City wards are labeled and shaded different colors for easy differentiation. Streets are illustrated and labeled throughout, along with parks, cemeteries, and an artesian well. Sites within the burned area are also identified, including three railroad passenger stations on the shore of Lake Michigan, the courthouse, post office, and water works. It is worth noting that the water tower and the pump house at the water works both survived the fire and can still be visited in Chicago.

The Great Chicago Fire burned roughly 3.3 square miles of the city of Chicago, Illinois from October 8 - 10, 1871. Approximately 300 people died and more than 100,000 of the city's residents were left homeless. The city's largely wooden construction and hot, dry, windy conditions led to the fire's rapid spread. The precise cause of the fire was never determined, but legends and theories spread quickly. The most popular of these theories was that Mrs. Catherine O'Leary was milking her cow in the family's barn when the cow kicked over a lantern (or an oil lamp, depending on the version of the story) that set the barn ablaze.

This map was created and copyrighted by Gaylord Watson in 1871. The present example was published in The Great Fires in Chicago and the West written by Reverend E. J. Goodspeed. We note five examples of the map cataloged in OCLC which are part of the collection at Michigan State University, the University of Illinois at Chicago, the Illinois State Library, the University of Chicago, and the Urbana Free Library.

Gaylord Watson (September 23, 1833 - October 10, 1896) was an American map publisher and engraver based in New York City. Watson briefly partnered with his uncle Humphrey Phelps as Phelps and Watson (1859 - January 1, 1865) with offices at 16 Beekman Street, New York. After 1864 he established his own imprint, now at 61 Beekman. Watson focused on highly decorative emigrant guides, wall maps, and railroad maps. Around 1871 Watson established a branch office in Chicago under the management of D. Needham at no. 66 Lake Street. In 1881 a fire destroyed Watson's offices at 61 Beekman Street, pushing him into deep financial stress. A notice appearing in Publisher's Weekly, 1893, reads, 'Gaylord Watson, map publisher, has been sold out by the sheriff. The sale realized about $800', suggesting that Watson had either died or fallen into bankruptcy. Watson lived in Queens, then Brooklyn, and in 1894, shortly before his death, Omaha, Nebraska. Learn More...