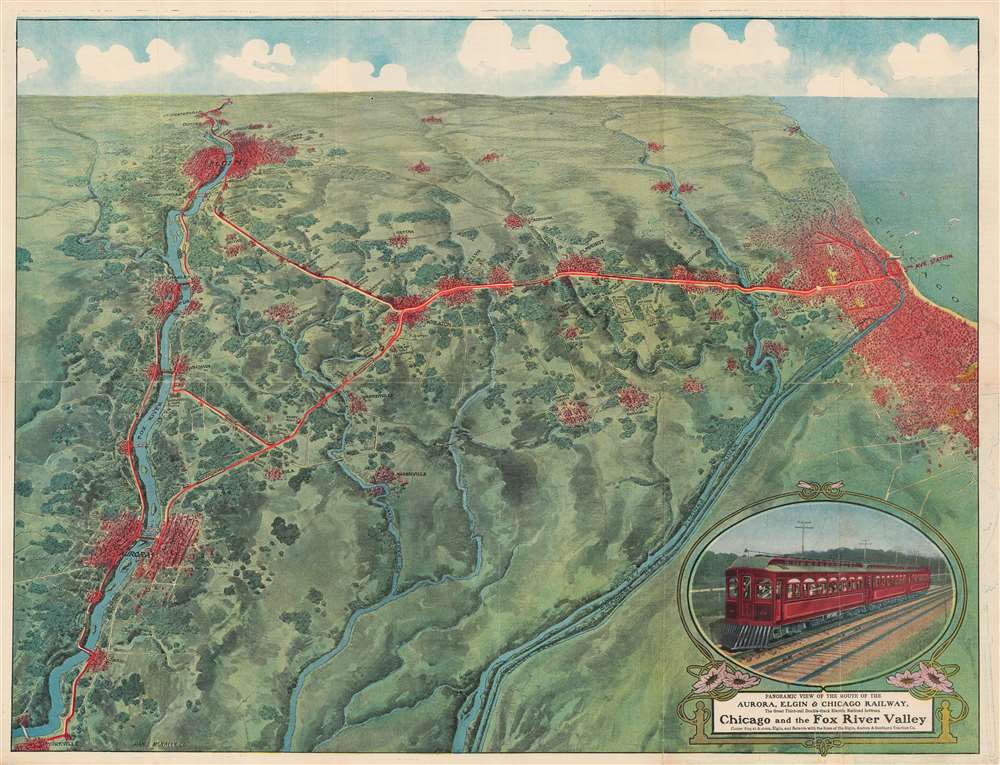 Outings for all summer long...

Panoramic View of the Route of the Aurora, Elgin and Chicago Railway, The Great Thrid-rail Double-track Electrice Railroad between Chicago and the Fox River Valley Connecting at Aurora, Elgin, and Batavia with the lines of the Elgin Aurora and Southern Traction Co.
1910 (undated)     17.75 x 23.25 in (45.085 x 59.055 cm)

A striking c. 1910 Rand McNally chromolithograph view of Chicago and lands west as far as the Fox River. The view illustrates the routes and coverage of the Chicago, Aurora, and Elgin Railroad, Chicagoland's largest Pre-WWI interurban electric railroad. The verso features timetables, a map of the Loop, and promotional material regarding the Fox River Valley's 'unspoiled country' and the 'peaceful valley'.

The CAE, known colloquially as the 'Roarin' Elgin' or the 'Great Third Rail' was an interurban electrified passenger railroad running between Chicago's Loop and suburban communities to the west as far as the Fox River Valley. Connections included Elmhurst, Wheaton, and the Fox River towns of Elgin, Batavia, and Aurora, among others. The company was founded in 1899 as several smaller companies, all of which consolidated around 1901 when construction began. Service began in September of 1902, reaching its height, as seen here in 1909-1910. The railroad was hit hard by loss of revenue during World War I and further suffered from the rise of the American automobile industry in the post-war years, leading to bankruptcy in 1919. They nonetheless were able to reorganize, shedding the Fox River Lines (running parallel to the river), and continuing to operate its more lucrative urban and interurban services. But, the decline continued. Within Chicago, CAE services were either replaced by or subsumed into the 'L' system. Service was discontinued entirely in 1857 and the CAE was dissolved in 1961.

This view was first published by Rand McNally for the Chicago, Aurora, and Elgin Railroad in 1909 for the G.A.R. (Grand Army of the Republic) meeting in Aurora. The present example exhibits update on the Elgin route that suggest this must have been issued a year later, in 1910. The view is rare. We are aware of only 2 surviving examples, this being the better.

Good. Minor verso repairs at a couple of fold intersections and to margins.
Looking for a high-resolution scan of this?