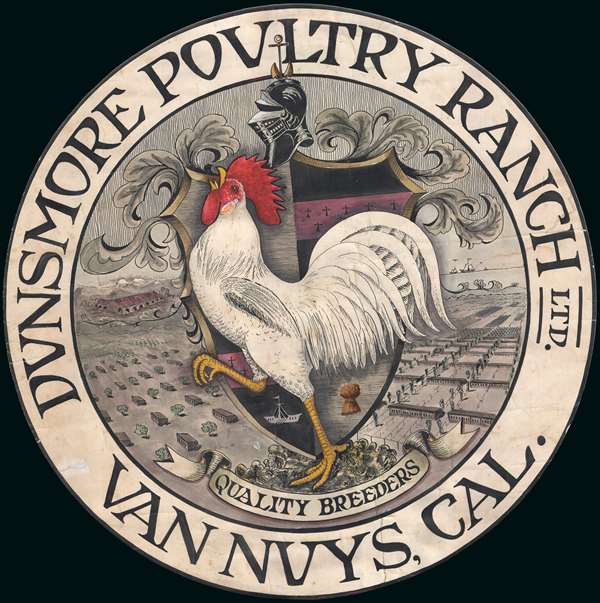 A stunning finely executed c. 1929 advertising artwork for the Dunsmore Poultry Ranch. In a circular format, the advertising takes the form of an armorial crest on which is superimposed a bright and bold leghorn rooster. In the background, on the left, the view looks westward from Van Nuys, illustrating the Mission San Gabriel and the snowcapped San Gabriel Mountains. On the right the Pacific is visible along with several sailing ships. In the foreground, chicken coops and walnut trees are illustrated – representing the ranch's primary products. Although the manuscript is undated, the addition of 'Quality Breeders' at the bottom, and the use of the full name 'Dunsmore Poultry Ranch' suggests this advertising must have been drawn in 1929, after a major renovation on the ranch led to an increased focus on breeding and poultry output. It was probably intended as draft artwork for the company's revamped signage and advertising.

The Dunsmore Ranch of Van Nuys

The Dunsmore Ranch of Van Nuys, in California's San Fernando Valley, was originally founded in December of 1926 as the Golden West Poultry Ranch. The owner of the ranch, W. Rowland Dunsmore, announced the name change to Dunsmore Ranch in the September 20, 1927 issue of the Van Nuys News, citing conflicting uses of the name 'Golden West' which was also a San Francisco area poultry ranch. The ranch was located on 20 acres at 6610 Haskell Avenue, Van Nuys, and originally focused on poultry and walnut production. The usage, 'Dunsmore Poultry Ranch' as opposed to simply 'Dunsmore Ranch' begins appearing local news outlets around 1929, when the ranch manager Herbert R. Cole, having completed a tour of Oregon, Washington, and Canadian poultry farms, committed the Dunsmore Ranch to 75,000 USD renovation, including an artificial hatchery, that vastly expanded their output. The Dunsmore Ranch was sold in July of 1934 to Frederick Webster, an emigrant from Ohio who relocated to Los Angeles several years earlier. Webster renamed the ranch after himself.

Van Nuys is a neighborhood in the Central San Fernando Valley, part of Los Angeles, California. It was initially settled in the 1870s when much of the valley was owned by developer, rancher, and businessman Isaac Newton Van Nuys. In 1909, Van Nuys sold the land to the Los Angeles Suburban Homes Company. Property began being offered as lots in a planned housing development in 1910. The community of Van Nuys was formally founded on February 22, 1911. Van Nuys and the other rural areas surrounding Los Angles were annexed into the city in 1915. It soon began an important stop on the San Fernando Line of the Pacific Electric Railway, leading to a property boom in the region. When this advertising was prepared, poultry farming remained the dominant local industry.

This advertising piece is owned in partnership with Barry Lawrence Ruderman Rare Maps.

Faint water stains. Old tape repair on verso, bottom center, extending about 5 inches into the map. Minor verso repair of closed tear, 1.5 inches, from right side.
Looking for a high-resolution scan of this?