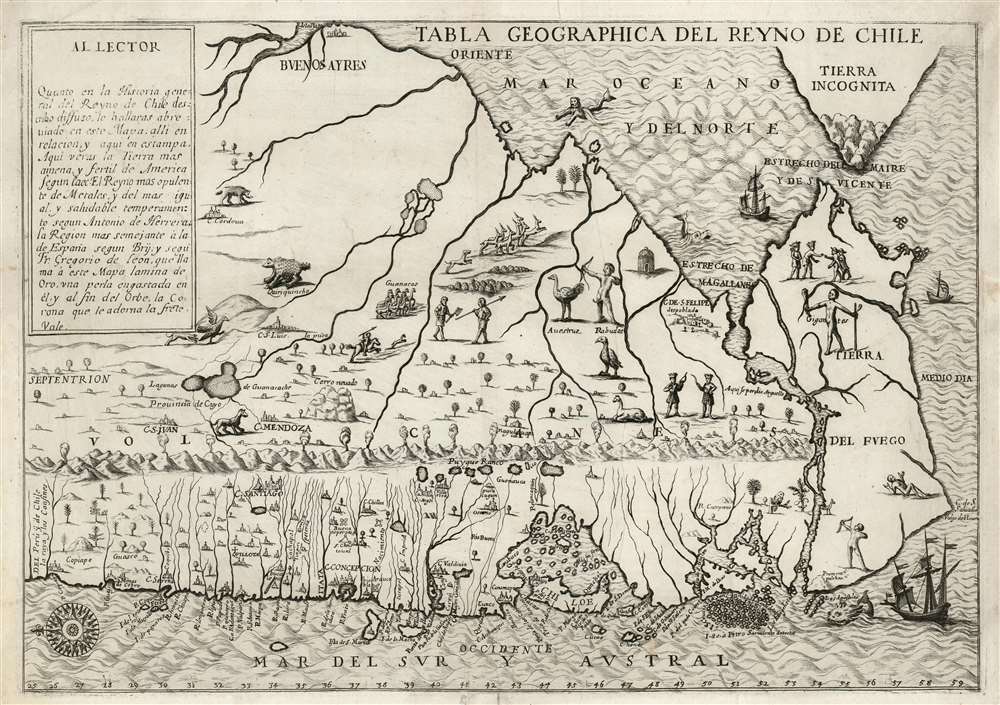 One of the 'best American Maps of the Period.'

This is an extremely rare Spanish edition of Alonso de Ovalle's map of Chile - arguably the most important early map of Chile, as it is the first printed map of the region produced by someone who actually lived there. Lawrence Wroth in Imago Mundi (vol 14) hailed the map as 'one of the most informative American maps of its period.' This Spanish edition of the map is significantly rarer than the Italian edition of the same year - we see no separate examples of the map in institutional collections.

In detail, the map far surpasses any other map of Chile produced contemporaneously or prior. Its scope is broad: it is oriented to the East, with North to the right, and extends in coverage from the Atlantic to the Pacific, and includes Tierra del Fuego as well as Drake's Island south of Cape Horn. It is rich in place names, and shows mines, missions, cities, towns volcanoes and rivers. It marks the course of the River Bio Bio as the boundary between Spanish and Araucanian territory (sharply relevant for Ovalle's history, which dwelt on the Araucanian wars).

The map is beautifully engraved, accompanying the detailed geographical information with animals, native figures (with and without tails!) and an evocative pictorial presentation of the volcanic mountains along the Pacific Coast. The oceans are sailed by ships, prowled by monsters, and embellished with a fine compass rose.

This map is rare. It was published to illustrate Alonso de Ovalle's Historia relacion del Reyno de Chile, the first history of that country. There are no copies of this separate map in OCLC, and only a handful of copies have come on the market.

Alonso de Ovalle Pastene (July 27, 1603 - May 11, 1651) was a Chilean born historian, educator and Jesuit, known for producing Historia relacion del Reyno de Chile, the first history of Chile. He was born in Santiago, Chile, son of Francisco Rodríguez del Manzano Ovalle and María Pastene Lantadilla Astudillo. Alonso lived and worked for most of his life in Chile, but resided in Rome from 1642 to 1650, where he had his work published. It included arguably the most important early map of Chile, the first printed map of the region produced by someone who actually lived there. He returned to South America, dying in Lima in 1651. Learn More...

Very good condition. Old marginal mend at centerfold; printer's crease. Else excellent with a bold, sharp strike.
Looking for a high-resolution scan of this?