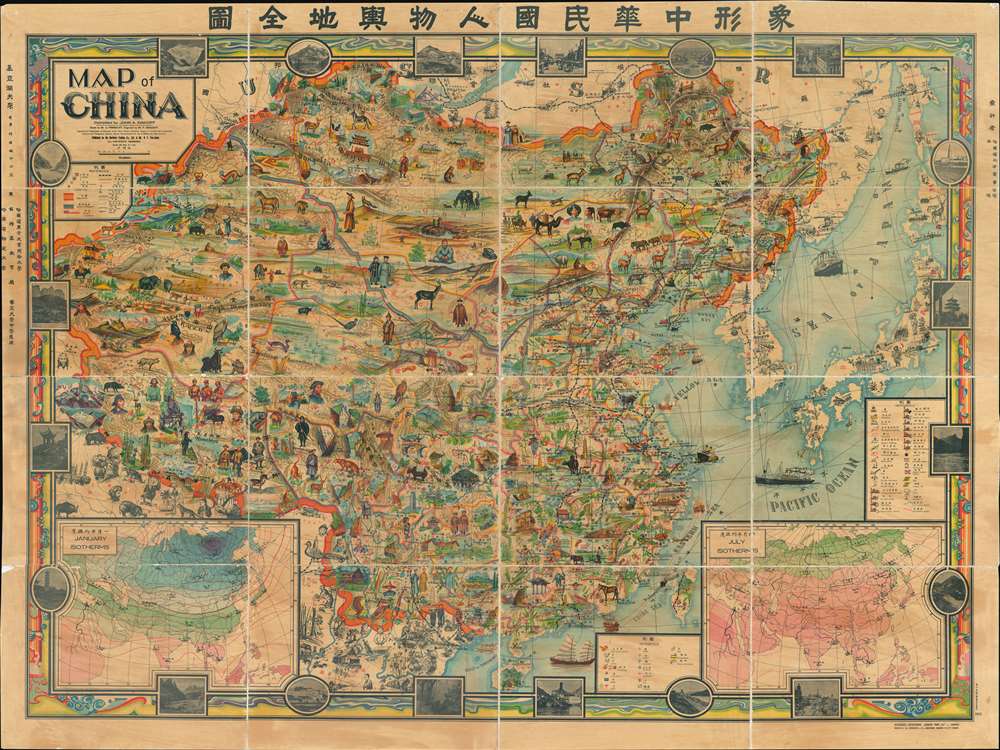 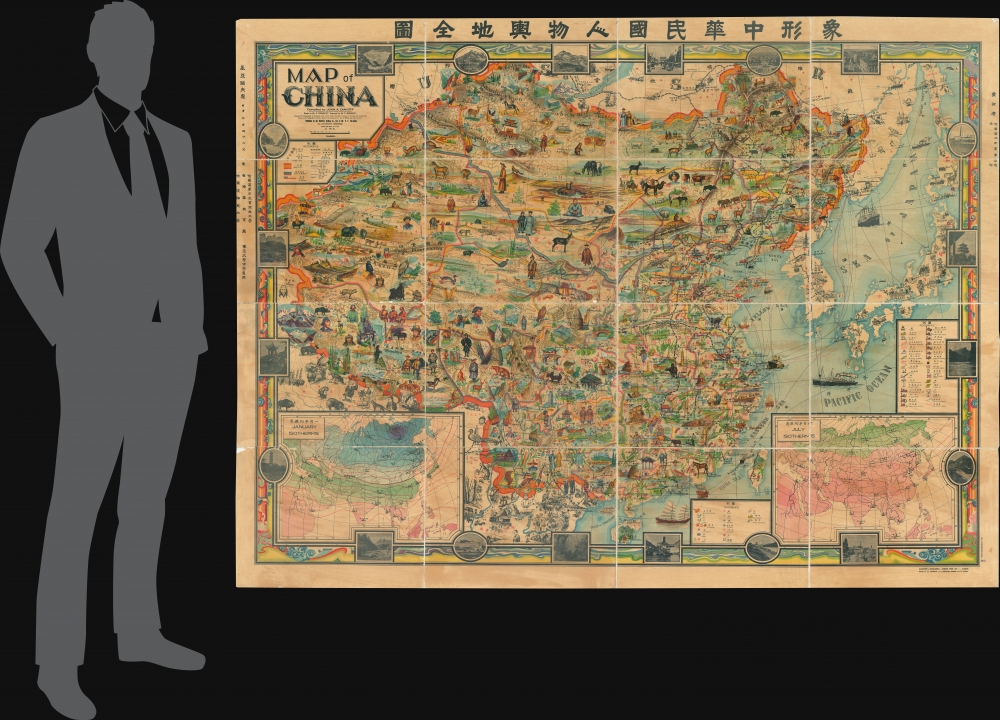 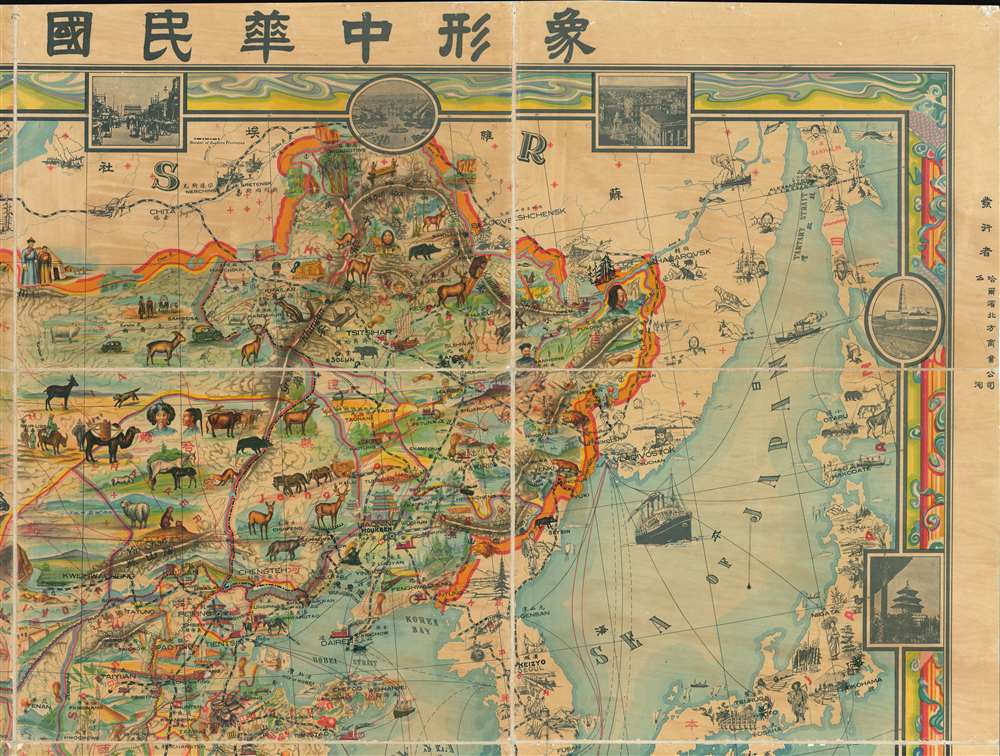 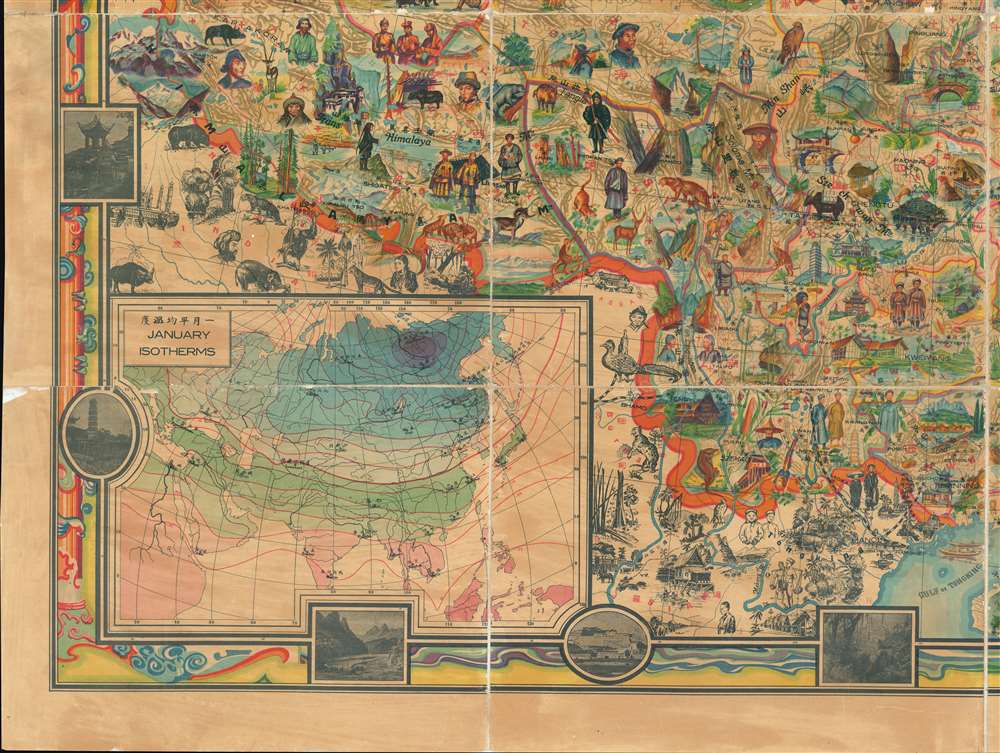 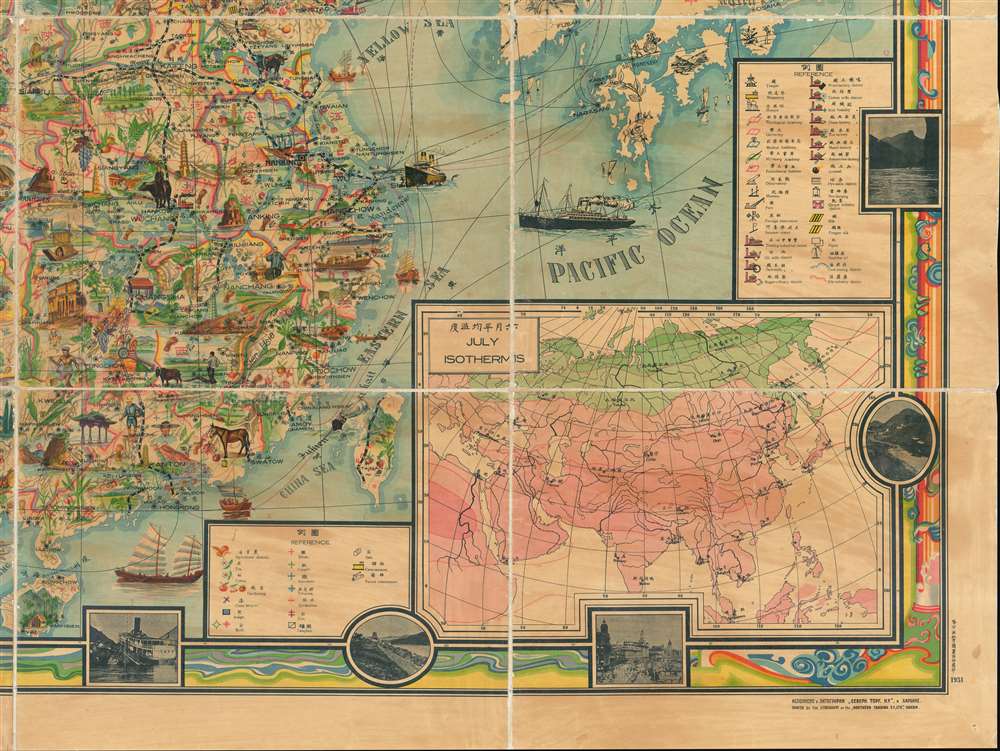 The most magnificent pictorial map of China ever produced.
$8,000.00

The most extraordinary pictorial map we have seen to date, a masterpiece This enormous and lavish chromolithograph pictorial map of China was compiled in 1931 by John A. Diakoff, drawn by G. Primakoff, and printed by Yao-Hsiun. The map covers all of China from Kashgar to Taiwan, including neighboring Korea, Japan, Mongolia, and Nepal. All lands within the borders of China are rich in color and detail with countless vignettes illustrating a diversity of plant and animal life, human cultures, architectures, and resources. Text and annotations throughout are in both English and Chinese. Regions outside of China, like Japan, Korea, and India, are also heavily illustrated with vignettes, but are not in color.

Diakoff 's map, ostensibly intended for Chinese school children in Harbin, hints as some of his political positions. It for example, suggests that Russians remained active in Manchuria - which in 1931 they were not. Harbin is represented by a nonracially distinct railroad employee in Cossack dress. The inclusion of Tibet within the borders of China is another unusual choice, considering that Tibet threw off the yolk of Qing rule in 1912 and was not annexed into the Republic of China until 1951. Taiwan too. At the time a Japanese colony, is here color coded as part of China. Diakoff appears to have been expressing support for China's historical claims to the region. It is of note that the title suggests that the map was 'approved by the Department of Education of the three Eastern Provinces' suggesting that the inclusion of China's territorial claims, may have been intended to appease this board.

This map was designed by John A. Diakoff (Ivan Andreevich D'Iakov) in 1931. It was drawn by G. Primakoff and engraved by P. Sergeeff. Tese later individuals are difficult to trace due to both the incompleteness, anglicization, and commonality of their names. Primakoff is most likely 'Перминов' and Surgeeff is most likely ' Сергеев', but beyond this, there are at least 3 possibilities for Primakoff and 2 for Surgeeff. The map was published by the Northern Trading Company (Северн. Торг. Ко), based in Harbin. The name of a Harbin-Chinese lithographer, V. F. Yao-Hsiun is also associated with the map and it is believed he may have been the actual printer. Examples are uncommon and highly desirable.

Ivan Andreevich D'Iakov (Дьяков Иван Андреевич; September 14, 1881 - August 23, 1969), commonly Anglicized as John A. Diakoff, was a Russian orientalist and traveler in Asia. D'Iakov was born in Kishal, Tambov province, Russia. A scientist and orientalist, D'Iakov conducted research in the pacific islands, borneo, and hong kong. He came to Harbin, Manchuria, from Hong Kong in 1931. There he established himself as was scientific collaborator of the Russian Orientalist Society, a group of Russian scholars (and many say spies) based in Harbin, China. He was also an inspector of Russian schools and in 1945 was teaching at the St. Nicholas School in Harbin. He returned to Russia around 1950, fleeing the Cultural Revolution. There he served as the region of Morshansk, Tambov, until his death in 1969. He is known for one map, an impressive pictorial map of China published for academic purposes in Harbin, 1931. He is also the author of several works on sinology and the Russian experience in Harbin. Learn More...

Very good. Dissected on linen. Overall toning due to old varnish. Laid down on original linen - which has been reinforced in places. Some edge wear to map and to individual panels.