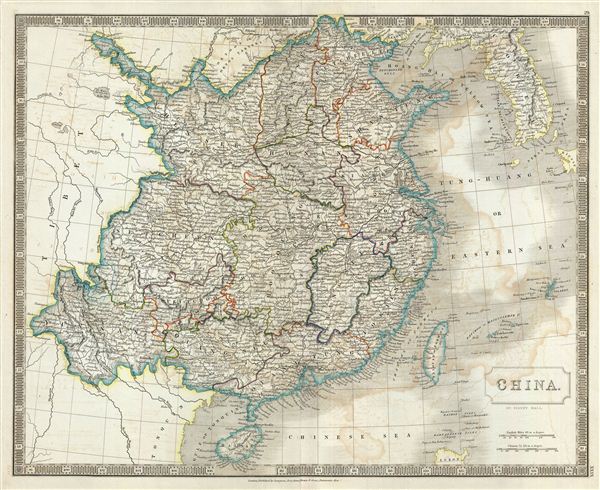 This is a beautiful map of China from Sidney Hall's extremely scarce 1835 New General Atlas. It covers China from Chinese Tartary to the Kingdom of Tonquin (modern day Vietnam) and from Yunnan to Corea (Korea).  Taiwan or Formosa (alternately labeled Taiouan) is mapped vaguely, representing the poor knowledge of the region prior to the Japanese invasion and subsequent survey work in 1895. Macao is identified. Hong Kong Island appears, but is not identified. The Great Wall of China is clearly rendered.

Halls map reveals China just prior to the First Opium War. In the early 19th century Asia was increasingly coming under imperial European sway. By the 1830s, oversaturation of the Chinese market slackened Chinese demand for most British products. To make up for the trade deficit, British merchants introduced Indian opium to China.  Addictive and cheap, Opium became Britain's most profitable and important crop in world markets, pouring into China faster than tea poured into Britain. Opium addiction and its attendant social ills reached such catastrophic levels that the Chinese government took action and destroyed British opium stores in Canton. As this threatened English commercial interests, the crown responded, sparking the Opium Wars of 1839-1842. The superior British forces took complete control of Canton, occupied Shanghai, and blockaded Chinese ports, forcing the Chinese to sign the 1842 Treaty of Nanking. This unequal treaty (the first of many between European powers and China) would grant Britain extensive trading rights in China.