1861 Johnson Map of China (with Taiwan and Korea) 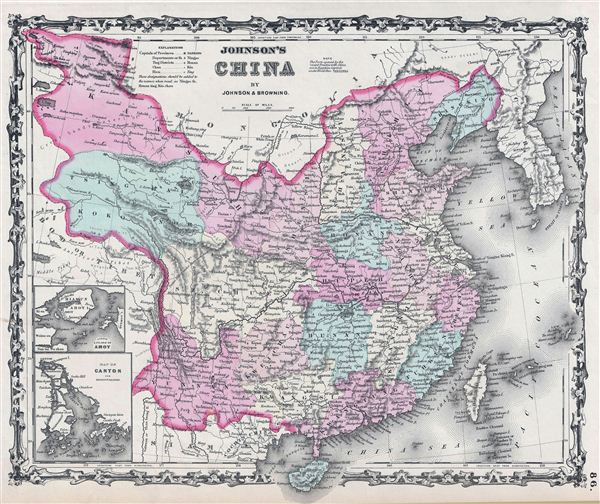 1861 Johnson Map of China (with Taiwan and Korea)

A fine example of A. J. Johnson and Ross C. Browning's 1861 map of China and Korea. Covers China from Tibet and Yunnan east to Korea (Corea) and north as far as Mongolia. extends south to include the island of Hainan. Formosa or Taiwan is also included, though notably malformed, reflecting the primitive state of the regional survey in 1861. Insets detail the Harbor and Island of Amoy (Xiamen) and bay and harbor Canton (Guangzhou) with Adjacent Islands (Hong Kong). The disputed body of water between Korea and Japan is here identified as the Sea of Japan.

Features the strapwork style border common to Johnson's atlas work from 1860 to 1863. Published by A. J. Johnson and Browning as plate number 86 in the 1861 edition of Johnson's New Illustrated Family Atlas. This is the last edition of the Johnson Atlas to bear the 'Johnson and Browning' imprint. Subsequent editions reflect Ward's 1862 acquisition Ross C. Browning's shares in the firm.