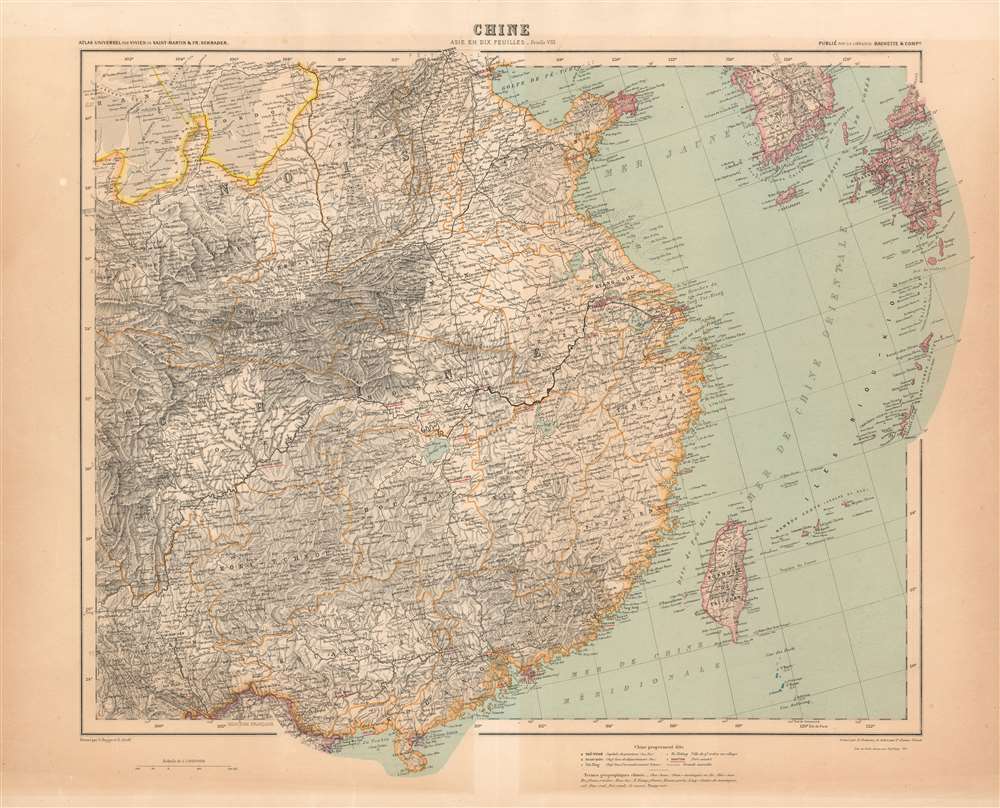 This map of China was printed in 1911 as part of Schrader's ten sheet supplement on Asia, published by the French firm Hachette in the beginning of the 20th century to extend that firm's Atlas Universel originally under the direction of Louis Vivien de Saint - Martin. The other maps of the series are: The map was recognized in the following year's bulletin of the American Geographical Society as having presented the country on 'a larger scale than usually available in standard atlases' but even then, it should be noted that this map - embracing China from the Gulf of Tonkin to Peking, and from the Yunnan province in the west to the Ryukyu Islands, and the Japanese island of Kyushu - did not reach all of what was then considered the Chinese Empire. The northern and western extents of 'L'Empire Chinoise' would be covered in maps 3 and 7 from the set. The map is superbly printed in color lithography, with mountains depicted pictorially in hachure.

Russian emigré David Alexandrovich Aïtov (Aitoff), inventor of the Aitoff cartographic projection, was one of the contributors to the map, as was the Swedish Gustav Bagge; both were employed by Hachette on the Atlas Universel, with Bagge's work in the atlas appearing as early as the 1870s.

The map, as a separate, is quite rare on the market and is catalogued by OCLC in a single copy at the Chinese University of Hong Kong. We see a complete example of Asie en Dix Feuilles only catalogued at the University of Chicago.

Louis Vivien, called Vivien de Saint-Martin, (May 17, 1802 - December 26 1896) was a 19th-century French geographer. Prolific and long lived, he had at least a dozen major titles to his credit, including an 1841 history of the French Revolution, an 1844 history of Napoleon, an 1873 history of geography, and (in partnership with Franz Schrader) his Atlas universal de géographique. Nothing has come down to us of his early years, but he was hailed during his lifetime: he was Honorary President of the Société de Géographie de Paris, member of the Royal Academy of Sciences in Berlin, and honorary member of the Royal Academy of Madrid. Learn More...


Jean Daniel François Schrader, or Franz Schrader (January 11, 1844 – October 18, 1924),Was a French mountaineer, geographer, cartographer and landscape painter. He was born in Bordeaux. His father was Prussian emigré Ferdinand Schrader, and his mother was Marie-Louise Ducos, cousin of geographers Élisée and Onésime Reclus. Despite early aptitude as an artist, his strict father refused him higher education, instead securing him employment with a tax collector, later moving to employment that would at least offer time for broadening his literary and scientific knowledge. In his twenties, he became enamored of the beauty of the Pyrenees mountains, and began to spend most of his free time hiking the mountain - but not without recording topographical observations, painting panoramic views, and developing an understanding of the science of topography. Through this activity he became a strong cartographer, with the intention of creating a large-scale map of his beloved Pyrenees. He went so far as to invent an instrument, the orograph, a machine designed to take precise measurements of mountains.

His 1874 map of the massif of Gavarnie-Mont-Perdu at a scale of 1:40 000 immediately commanded the attention of the Société des Sciences Physiques et Naturelles of Bordeaux, and he would become a founder and the first president of the Bordeaux section of the Club Alpin Français. In 1877 he was employed as a geographer by Librairie Hachette a profession that allowed him to continue his passion for mountaineering. By 1880, he would become Hachette's director of cartography for Hachette, where he would produce dozens of works, including mountaineering guides as well as traditional atlases such as his continuation of Vivien de Saint-Martin's Atlas de géographie universelle. Learn More...


David Alexandrovich Aitov (Аитов_Давид_Александрович) (June 6, 1854 - March 20, 1933) was a Russian geographer who appears to have produced his work predominantly in France. He was born in the Russian city of Orenberg: nothing is known of his education or training, but after he emigrated to France in 1879 he would be employed by the publisher Hachette in the production of their Atlas Universel, guided first by Louis Vivien de Saint-Martin and later by Franz Schrader. He is best known for his Aitoff Projection, a modified azimuthal ‘equal area’ projection of the world which he devised in 1889. Learn More...


Gustav Pontus Bagge (July 31, 1839 - December 31, 1915) was a Swedish military officer, cartographer and artist who emigrated to, and was active in, France in the 19th century. He had been an officer in the Swedish guard and was in charge of the Swedish War School's topographical training, whilst also engaged in painting and in museum work. On the outbreak of the Franco-German War in 1870, he resigned from the Swedish Army to join the French Army. He was appointed Capitaine du génie and was awarded the Legion of Honor. He was one of the few Swedes who remained in Paris during the turmoil during the Paris Commune, and the sketches and notes he then made have a great historical value. After the war, he was employed as a geographer by the publisher Hachette et Cie in Paris, where he would remain for 30 years. The French Topographical Society awarded him their gold medal in 1911. He continued to produce art as well, and participated in an art exhibition in Gothenburg in 1886. Learn More...