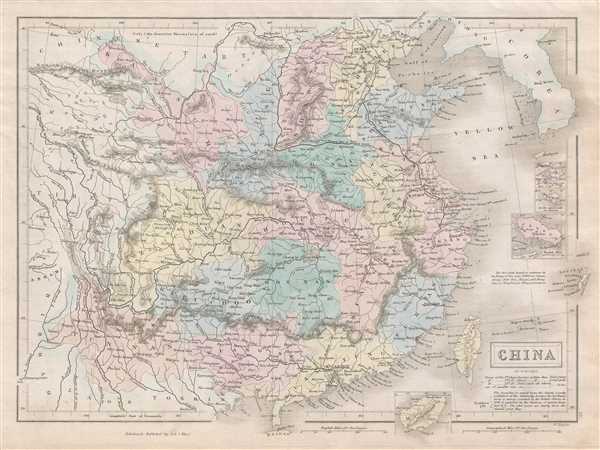 China on the brink of the Taiping Rebellion.

This is an 1851 Adam and Charles Black map of China. The map depicts China from Chinese Tartary to Hainan and from Assam in India to Korea (Corea), inclusive of Formosa or Taiwan. Four inset maps detail Amoy, Hong Kong, ZhouShan and Hainan. The Great Wall of China is identified. Taiwan or Formosa is mapped vaguely, representing the poor knowledge of the region prior to the Japanese invasion and subsequent survey work in 1895. Both Hong Kong and Macao are identified.

At this point in history, this region was dominated by China's last Imperial Dynasty, the Qing. As this map went to press, in 1851, the region was about to dissolve into one of the bloodiest wars in human history, the Taiping Rebellion against the Qing, which lasted from 1851 until 1862 and cost more than 20 million lives. Around the same time, the Second Opium War or the Arrow War, a conflagration which lasted from 1856 until 1860, resulted in the concession of Tientsin and Hong Kong by the Chinese to the British.

Myriad cities, towns, rivers, mountain passes and an assortment of additional topographical details are identified throughout. Provinces are color coded, allowing for easy differentiation. This map was engraved by W. Hughes and issued as plate no. 55 in the 1851 edition of Black's General Atlas.